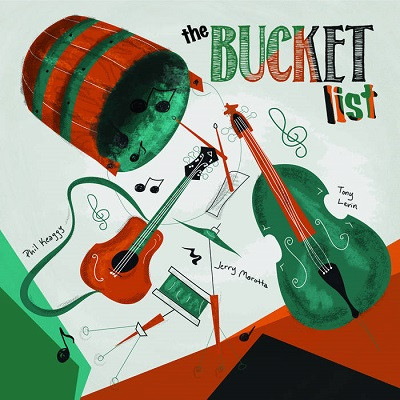 What would happen if you combine three of the living masters from Glass Harp, King Crimson, and Peter Gabriel? Well, you’d have some of the amazing combinations between the realms of; Phil Keaggy, Tony Levin, and Jerry Marotta. They take you on a journey throughout these wonderful landscapes that you as a listener embark on before going into the afterlife by crossing out some of the things you did on The Bucket List.

The trio brings the essence of Fusion, Progressive, Flamenco, Bossa-Nova, and Folk music to life as if they’re travelling throughout several locations at the heart of Brazil. Keaggy’s playing goes from electric to acoustic as he creates some of these incredible lines that are classical, arpeggiated, and rhythmic textures by riding the crest of a wave.

He honors the masters of Allan Holdsworth, Michael Hedges, and Steve Hunter, who had worked with Peter Gabriel on his first sole self-titled debut album. Tony Levin’s bass and stick playing is still stronger than ever. He shows no sign of stopping by keeping up with his bandmates to make sure he’s got their backs. Jerry Marotta keeps the super glue tighter between Keaggy and Levin as his drums and percussions are knitted down perfectly. The idea of the project came in 2008 when the trio first met and did this improvisation during a session in Woodstock, New York. Cut to 2018 when they had an idea to record these tracks with a collection of these arrangements that are brought to life.

Like a flower that is ready to bloom, these five centerpieces make you want to get packed and drive across the country to search for the real American dream. On ‘Stella Luna’, Keaggy breaks all the rules on his acoustic guitar by channeling the late great Michael Hedges as if he’s continuing where he left off during the ending section of ‘Ritual Dance’.

He adds more ideas to pay tribute to a man who took everybody with him for an incredible ride. Both ‘Where’s Phil?’ and ‘Phil’s On’ start things off with Levin’s stick making it sound like a string bass and Marotta’s intensive percussion work. The two of them do this improvisational exercise before Phil unleashes his whammy bar as they check out beach waves going back and forth as he makes his instrument sound like a steel guitar to capture the inspirations of Hawaiian music.

On ‘Fearless’, Tony Levin’s stick can take it up a notch by travelling towards the passage of time. Throughout his amazing career between working with Peter Gabriel, John Lennon, Lou Reed, and King Crimson; Levin’s instrument goes throughout these horizontal-like landscapes that you just couldn’t take your eyes away from the beautiful scenery of South America.

‘Sometimes We Up’ is a driving highway composition as Keaggy’s acoustic/electric guitar plays the rhythm and melody with some folky elements while Levin and Marotta follow his direction on where he wants them to go. It has a wonderful mellowing coolness in Phil’s heart and soul. It’s very much like he’s pulled his car in the driveway and finally made it back home from a long, exhausting, but brilliant trip he had with Levin and Marotta by taking a long awaited break.

The Bucket List is Keaggy, Levin, and Marotta’s driving album. It works perfectly well. And not only that, but they are a team by working together. It is an amazing combination that they’ve released this incredible album. And I hope they continue to start next adventure that awaits for them.