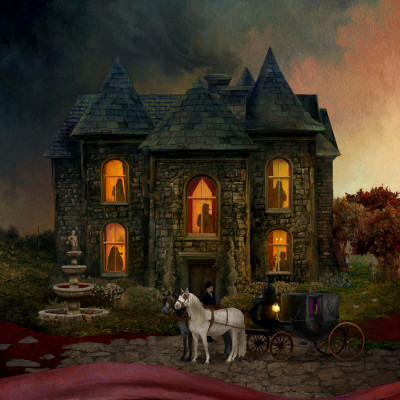 In Cauda Venenum by Opeth

Reckon you have mastered pronouncing the album title by now? In Cauda Venenum, the Latin words which literally translate to the poison in the tail is the thirteenth album that Opeth brings to their audience on 27th September, 2019. Quite a language carnival with the album title being in Latin, the songs in Swedish and there is an English version too. The introspective Åkerfeldt of course cares about the business side of it. While the Swedish lyrics will patently appeal to the audience in Sweden and Finland predominantly, Åkerfeldt salvaged the sensitivity of alienation for his non-Swedish fans by having an English version of each song. Yes, each song, and that is a lot of extra effort. Being someone who studied languages, I can faintly fathom the amount of twiddling Åkerfeldt executed to make his English speaking audience get a reflection of what he wanted to emote in his vernacular. For instance, the song ‘Svekets Prins’ literally means the prince of lies in Swedish but to transpire the idea Åkerfeldt named it ‘Dignity’ in English. Although I don’t follow the language, the Swedish segment of the album somehow appeals to me much more than the English side of it. Also, the controlled volatility of his vocals is sonically more profound in Swedish.

The album is a far cry from Opeth’s previous album Sorceress. This is the album where Åkerfeldt adeptly expresses to his audience and peers his musicianship in present times. Of course he has tried not to put on a garb over the years and in the course of which he has managed to spark debates we all know of.  Where is the metal side of Opeth? In Cauda Venenum is a beautiful melange of the heavier shadows of yester Opeth and down tempo vibes. The album opens up with a Tangerine Dream like instrumental piece ‘Livets Trädgård’, which also has this uncanny Hans Zimmerish feel about it. This track acts like a great curtain raiser for the album that revolves around the superficial tangles of this growing age of virtual reality. How the world is desolate and encumbered in loneliness.

‘Sveket Prins’ is one of my top favourites from the album. The song right off the bat with its heaviness evokes the virtuosity of Opeth. The mellow acoustic elements are carefully accommodated and the incomprehensible (for English speakers) sample of the late Swedish Prime Minister OIof Palme adds a pinch of political mystery. Heavy thrushes of Opeth are also felt in songs like ‘Hjärtat Vet Vad Handen Gör’ and ‘Charlatan’. Your head banging moment with those pounding drums and pulsating guitar solos, proving Åkerfeldt’s maverick attitude doesn’t fail. ‘Banemman’ sojourns into middle-eastern territory with a march into jazzy bundles of galloping grooves. In parts of the album the muffled voice of a little girl which is like a tantamount to the innocent times of our lives sans the bitterness of reality renders a dreamy structure. This kinship with these wispy flavours is also felt in one of my other favourite track ‘Minnets Yta’. In this album each song evokes a distinct character. While the blistering licks by Åkesson and the sprays of dulcet interludes is listening to the proggier Opeth, the punctuations of heavy riffs and growls are emblematic of the early Opeth days.

The nascence of this album was in fact with ‘Ingen Sanning Är Allas’ in November, 2018 at the Park Studio in Stockholm, Sweden with mixing duties taken over by Åkerfeldt himself along with Stefan Boman over a period of three months. Unlike Sorceress, Åkerfeldt decided on getting this album mastered, and the chosen one was Geoff Pesche, the mastering engineer who boasts of polishing productions of Gorillaz, Kate Nash and Coldplay to name a few.

The album artwork designed by Travis Smith beautifully crams the notion of what lies within this record. No, this is way more beautiful than Blackwater Park, Still Life or Morning Rise. With a spectrum of Åkerfeldt’s prodigious skills, this is the quintessential album that Opeth fans cannot dismiss. Åkerfeldt admits that he doesn’t want to tap into heaviness and the honesty in his music doesn’t in any bit plummet his caustic charm.

Opeth has a lot of tours lined up to share the grandeur of In Cauda Venenum in the coming months and I myself cannot contain the excitement of hearing them live in November.

Here goes the list of the English versions for the original Swedish tracks.