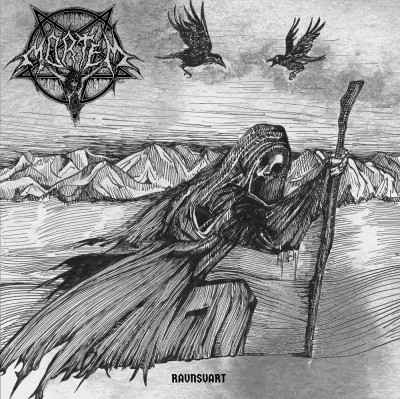 If there’s one thing that Mortem have going for them on their debut full-length, it’s that no-one saw this coming. Their demo Slow Death, released back in ’89, has become a minor landmark in the Oslo scene, a brief glimpse of cold brutality as remarkable for its content as it is for the men involved, namely Marius Void and Steinar Sverd Johnsen, who eventually went on to turn black metal on its head in the cosmic carnival troupe that is Arcturus, as well as Mayhem’s Hellhammer on drums and the late Dead and Euronymous on art and production duties, respectively. Unfortunately, other projects took precedence and that was the last the world heard from Mortem… well, until now.

Seeing as Arcturus decided to grace us with a new record a few years ago, so too have Mortem and while Ravnsvart might not be the black metal record that we all didn’t know we needed, it is a ridiculously well put-together and occasionally brain-melting trip through the Oslo backwoods and the more obscure reaches of the infernal void. The production might have been beefed up a little (okay, a lot) from that of their rough and ready demo but this is pure northern darkness, an evil and vicious record just like your daddy used to make.

Getting the negatives out of the way first, this will in no way change how the world thinks about black metal in its myriad forms. The flitting between barnstorming blastbeats and sharp martial rallies, crisp production and, more importantly, those omnipresent synthesised fanfares are a textbook take on symphonic black metal and while a few Arcturus comparisons are only to be expected, the shades of early Dimmu Borgir and Emperor are often difficult to ignore. Still, one can only guess that this is what happens when your last release was three decades ago. The rather skippable ‘Blood Horizon’ is a particularly notable example but thankfully, it’s not only a rare misstep but also the shortest track to be found.

Everything else feels like both a celebration and a refinement of a period of uncompromising musical versatility. Opener ‘Ravnsvart’ strikes just the right balance of orthodoxy and cosmic weirdness, Hellhammer laying down a performance so exceptional in speed, violence and complexity that it rivals anything he’s done in years, while Void and Johnsen’s melodies switch up relentless aggression with a vaudevillian upswing that sets the pace for the rest of the record. ‘Morkets Monolitter’ does likewise but injects a sense of unease through spacey atmospherics, giving the whole thing something of a Prince of Darkness, transdimensional evil vibe that works with the album’s tone surprisingly well.

One of Ravnsvart’s greatest strengths, and perhaps something that tends to be omitted in a genre so steeped in rigour, is that it celebrates embellishment. The use of synths is myriad but almost never overdone, throwing in a grand flourish here to lend a sense of drama or a near-opiated reel to heighten the sometimes dizzying gravitational shifts that their riffs can sometimes summon. Be it for pure atmospherics, to accent a good melody or just simply to add something to illuminate the gloom, it takes Mortem’s compositions somewhere at least slightly different from where we normally dwell.

It’s pointless to debate whether any record that comes after a 30-year-long gap is ‘worth the wait’ but there’s no mistaking that this is cut from the same cloth as the demo that helped birth a genre. Hopefully there’s more to come in the future but, if not, Ravnsvart is a great example of a band finally getting to express themselves in a form that they desire and deserve.