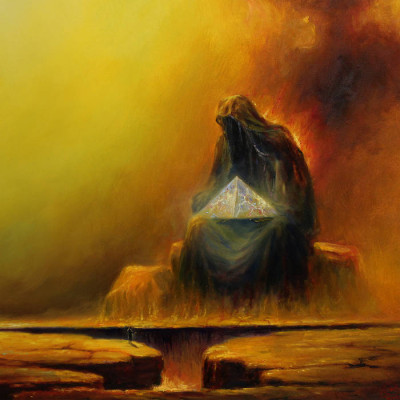 מזמור (aka Mizmor) is, if you haven’t already been swept away by its force, a one man black metal / doom hybrid, hailing from one of America’s most fertile extreme metal heartlands, Portland, Oregon. Cairn is the act’s third full-length release and follows on from the revelation that was 2016’s Yodh. That unbelievable album featured in a great deal of year end lists, and with good reason; it was one of the most daring, expansive blends of black metal and doom I and many others had ever heard.

Like two immiscible liquids, black metal and doom are not natural bedfellows. They are two genres that are almost polar opposite in many of the facets that make them so distinct and instantly recognisable. To be clear, Mizmor isn’t trying to bring in a touch of doom flavour to their black metal, or to play ‘blackened’ doom. This is an attempt to blend the two genres; two sounds that in so many ways fundamentally differ. However, they do have some sonic similarities and aesthetic touchstones; the overwhelmingly majority is incredibly heavy, they often have expansive track lengths, and feature piercing vocals, among a host of other signifiers. It feels that Mizmor started at these few elements that do meld, seemingly without imploding, and then through trve infernal artistry, has managed to knit together their disparate sounds, grafting the two together meticulously, religiously, primitively. It is by no means a natural coalescing, but Cairn – more than any other band and certainly any Mizmor album – has managed to create a Frankenstein’s monster that doesn’t look or feel like a convoluted, studious science project done for the sake of showing off, but instead slowly unveils and reveals itself, and is, in its own special, extraordinary way, terrifyingly beautiful.

Talking of looking beautiful, I feel the need to take a moment to point out that cover. I know this is a music review, but the inner aesthete in me requires that I take some time and written words out of this ecstatic ramble, to just marvel at the package Mizmor and Gilead Media are curating when you indulge in these epic pieces of work. Yodh had stunning artwork from Zdzisław Beksiński and Cairn follows suit with this glorious image from the instantly recognisable, increasingly iconic, Mariusz Lewandowski. Titled ‘Time Immemorial’ it rather sets the tone, don’t you think?

Single member, A.L.N., comments on Cairn’s genesis, thus; “I don’t seek to write music. I wait until something bubbles up inside me, until it aches, and I can’t hold it in any longer.” This biographical note truly makes sense in the context of listening, dissecting and immersing oneself in Cairn. With four tracks and clocking in at only just shy of an hour’s running time, the album is a taxing listen, but this should not put off anyone who is happy to get lost in incredibly realised, organic music and willing to transport themselves away from this mortal coil. Mizmor has always put out long records, but Cairn feels the most coherent and rounded of all A.L.N.’s discography yet. It is only ‘taxing’ in the way the best doom and black metal can be: ruthless, unrelenting, caustic, powerful, draining, inspiring and ultimately moving.

The album starts with ‘Desert of Absurdity’ and an acoustic passage that lulls the listener into early tranquillity. It puts me in mind of that old science tale where a frog would hop straight out of boiling water, but, heat the water up slowly from room temperature to boiling and the frog will just sit there until cooked. The sonic equivalent happens when listening to this opening track. Distortion and feedback slowly, ever so slowly, begins to be introduced and then built upon as the acoustic guitar winds its way forward, until it comes as no jolt of surprise per se – yet it still thrills – when the track explodes into life, with black metal tremolo and furious drumming. It then feels like the most natural thing in the world for the track to devolve, as the main riff gets deconstructed, like matter entering an event horizon; slowly being stretched, broken apart to its constituent parts, and time ceasing to have meaning, as it elongates – spaghettifies – into doom. And that’s just track one, which happens to be the shortest, at a tender ten minutes in length.

‘Cairn to God’ clocks in at over eighteen minutes. Its atmosphere and songwriting prowess is a wonder to behold and with other central track, ‘Cairn to Suicide’, they give the album its title, spine and emotional heart. ‘Cairn to God’ is epic, creating a lavish palette that takes in every hue doom has to offer, and then reimagining it in monochrome with some mind-expanding black metal flourishes. And while this is utterly breath-taking and transports the listener to a new world coloured in stark golds and blacks, it is ‘Cairn to Suicide’ that solidifies into the gravitational orbit of that world. It is easily Mizmor’s most accomplished, emotional track ever written. This track, even if released alone, in complete isolation, would have cemented the act as one of the most important in modern extreme metal. It is the summation of everything A.L.N. has been doing with the project to this point, and with stunning production (mapped across the entire record, it should be noted), it provides 2019 with an utterly essential, ‘must listen’ moment. There’s been a few choice moments already this year – we are so very lucky – but ‘Cairn to Suicide’ is most definitely another. Only ignore it if you wish to be proven very foolish indeed, come the end of year.

Cairn finishes with the monumental ‘The Narrowing Way’, itself clocking in just short of seventeen minutes. None of these tracks are easy to listen to, and all require your undivided attention. No cleaning the kitchen while this is on people – lights off, eyes closed, and immerse yourself, isolation-booth-esque. Mizmor requires you to do a deep dive. Each track, including this triumphant, downer finale are incredible, and showcase the most diverse writing on any of the act’s releases to date. Black metal purists may struggle with A.L.N.’s alchemical take on the genre; but  I would implore anyone with a sincere love of black metal to open their mind and give it a go. Those who love doom may, I believe, be able to take in Cairn’s experimental, genre-bending sound a little easier, as aside from a few passages, it is the mood and resonance of black metal that is infused here, rather than being replete with it’s stylistic calling cards. Mizmor really has created a perfect hybrid here, though, and Cairn should be applauded across the underground metal community. I have no doubt it will be. It’s astonishing. Truly astonishing. Required listening by all.