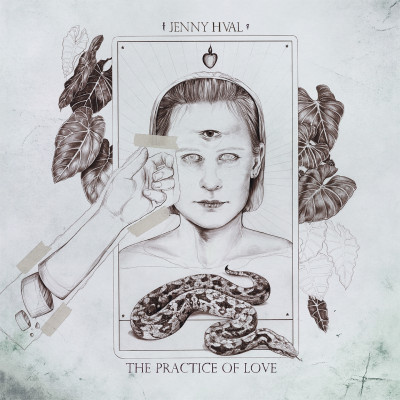 The Practice Of Love by Jenny Hval

Jenny Hval’s output has been consistently evolving. Her releases on Sacred Bones have grown from the frazzled trip hop of Apocalypse, Girl through the distressed and confrontational vampiric sounds on Blood Bitch to 2018’s The Long Sleep with its oneiric jazz swamp, all the while refusing to tread water. Throw in her persona-blurring novel, Paradise Rot, with its visceral upending of corporeality, sexuality, & apples, and her catalogue of work seems both expansive and vital. And that’s before we’ve even touched upon her most focused, inspired, and damn well exhilarating record yet: The Practice of Love. This one builds on all that came before.

All of the disparate artistic threads are funnelled into one cohesive outlet. She asks big questions and debates them with a smile. She refuses to lose herself within a self-absorbed labyrinth, always darting outside of her safety net to seek answers and responses. Hval has actively encouraged others to share in this process and, as a result, this has led to her most incisive, stirring, and, dare I say it, catchy record yet.

‘Six Red Cannas’, for example, contains a vocal swoop that is reminiscent of Grimes at her most playful. The arpeggiators are in full flow, helping to build a dance track for ennui warriors. When Hval chants “We used to be all under water” there is a faint echo of Tool’s call to armbands contained within. At other times she recalls the delicate pounding of Kedr Livanskiy. Soaring synths, effervescent pads, and a persistent driving beat that reassures with its rigidity return time and time again throughout The Practice of Love. Hval’s melancholic vocals layered on top douses the transcendental experience with a smear of grit. There is a word for this music but it’s been sullied over the years.

This new record sifts through the sounds of a vacuous era. From a time unawakened. 90’s trance – a genre more vapid and hollowed out than the thin ends of EDM, dubstep, and drum ’n’ bass (if you can imagine such a thing) – spent its years in the sun blinking at the 21st century with all of its trepidations misdirected and misunderstood. Those who grasped trance as a soundtrack for nihilism and narcissism faded out as the millennium came and went. The town in which I grew up contained an area named Teville Gate which had been hijacked by feckless individuals in order to hump their overclocked hatchbacks around a semi-private lap just south of the train station. This dick-swinging contest was inevitably accompanied by the boom of sub-bass interlaced with trance’s mercenary vocalists for hire, spouting empty platitudes on the fertile subjects of hedonism and po-faced ‘love’.

But Hval has reclaimed these sounds from the cash magnet night clubs and abandoned fields and has employed them in a far more cerebral & transcendental manner. Utilising them for intriguing discussions on humanity, our role in the world, parenthood, care, intimacy, and deep decisions of participation, all wrapped up in a beguiling veneer of poetry. She has swept aside the pan flash of MDMA highs and bohemian idealism and, instead, uses this platform to interrogate place and purpose. Place being the land underfoot. Land once trodden, remembered, forgotten. Streets that informed and promised, now left empty. Forests that gave glimpses into unknown worlds. They have remained but we have changed. Do the forests glimpse something unknown in us? Posing such questions and bravely seeking the answers through the hazy synths and syncopated beats of an oft derided genre seems like a masterstroke. It places brows neither in the gutter nor amongst the stars. Instead they remain sat just where they ought to be: beneath a furrowed forehead and above hopeful eyes.

There is a distrust of love contained within. On the title track, which is a sort of three-way musical conversation between Jenny Hval, Australian artist Laura Jean, and musician Vivian Wang, we hear that love “contains the entire word ‘honesty’ inside it”. There is an ongoing discussion over a woman’s place in society if they do not bear children. How can the ego cope with being reduced to a supporting role if the main characters are those that have kids as “they literally keep the virus going.”

But this isn’t the sole narrative. Pushing back against these concerns is a deep thread of dormant sexuality. In ‘Ashes to Ashes’ we hear how she “Used to dream of fucking before I knew how” and the inquisitive tone of “Two fingers in the earth, in two erotic lines, into the honeypot, into boys nude magazines” is suggestive of youthful innocence and experimentation. Then on ‘High Alice’ – a track indebted to that famous looking-glass traveller – we hear “Let her sketch out her rabbit hole, her pleasure dome” and “Where I wrote my first poem, with my hand on my skin, with my hand between my thighs”. It seems that Hval is rooting around in her past, trying to uncover the formation of her present and what her future might hold. “I was just an accident, even to myself” she intones on the aforementioned ‘Accident’. This suggests that she is culpable in this mistake. Perceiving herself in the third person, the lines shift to “She is an accident, she is flesh in dissent”.

There is no shame implied, however. This is about acquiring knowledge of the self and choosing how to let it shape you. On the opener we are asked to “Look at these trees”, to “Study this and ask – where is god?” Initially this might seem to be an environmental concern but, buried beneath are instructions, an insinuation, of how to approach her work. And that’s what it all comes back to. Her music. It glides. It is smooth and dazzling, streaming into ear canals like the trickle of a brook which picks up pace and then surges down a cool and wending mountain. Beneath the surface it scars and upsets but, up top, it glistens, lures, and refreshes. Her work is artful for use’s sake. It’s never a welt of self-important pomp. She broaches these head scratchers for art’s most profound reason: to help those lost and wondering feel just a little less alone. And that’s got to be worth something, even if we are just a virus.