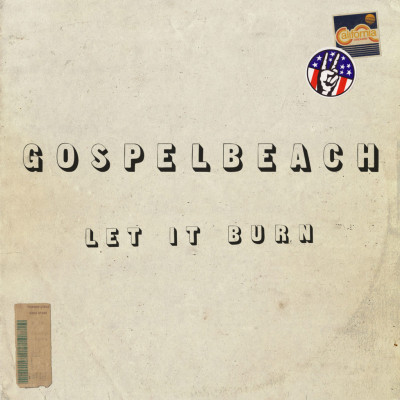 Let It Burn by GospelbeacH

From the opening track of the brand new GospelbeacH album, you know you are in for a real treat of music as the song slowly builds from its troubadour Laurel Canyon roots into an explosive finale of pure West Coast Americana. With a guitar solo to knock you for six, and beyond, it’s a perfect opener for a band who should really be absolutely huge. Unfortunately we live in crazy times where good songwriting chops seem to be unfashionable. Well, there are still some to keep the fire burning.

That fire burns bright here as Brent Rademaker makes what is intended to be a rock and roll record. This time bolstered by the return of Neal Casal, who recently passed away prior to this album’s release, there is an added sadness to the triumphant melancholy that is felt through each of these racks. Ghosts of the past flutter by, but it is recent losses which hit hardest, yet here they become a soothing balm to all that.

With an album which is simply highlight after highlight, its worth checking closer at the Petty aping ‘Dark Angel‘, or the dramatic ‘Fighter’ for pure rock and roll thrills. The doo wop swing of ‘Unswung’ sidles in for a little fun and frolicking, but it is in the deep slow-burners that you really want to spend your time. Oh man, and what a time you will have amongst the soaring melodies. From the gorgeous lilt of ‘Good Kid’ to the stunning ‘Baby (It’s All Your Fault)’, there is a yearning within these songs which strikes at the very heart of being alive.

In fact, if you could level anything at Brent and Gospelbeach, it would be the sheer veracity for life that they have. The joy that emanates from each of these songs, is a beautiful thing to behold, and digs deep into the now quaint aspects of peace and love. For matters of the heart, smoke deep, dig it deep, and turn on. Deep, man. Be sure to listen out for that little yelp of “rock and roll” towards the end of ‘Nothing Ever Changes’. That’s it, right there. That’s what is all about.

Maybe it’s a reaction against the homogenised electronics of pop and other such music, but we seem to be living in revivalist times for good old classic song-writing and jamming. Brent Rademaker is key to much of this and with Gospelbeach he has found an outlet for the gorgeous melodies that haunted the Canyon back then. That he has turned Let It Burn into a celebration of rock and roll too, speaks volumes for the continued embrace of the kind of music you used to find in your parents record collection. Maybe now its time for a new generation to embrace and build upon it.