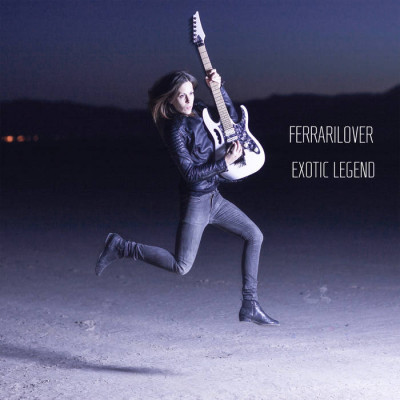 Solo guitar albums, especially those involving an electric guitar can often turn into a tedious affair, even if the guitarist involved is somebody of such legendary status as John Fahey. Also, they can turn into a series of oblique solos that make no sense by themselves. With that in mind, and learning that Exotic Legend, the second album by San Diego guitarist Nico Wyland aka FerraiLover involves just her on an electric guitar, it took me a bit to play it. Yet, the moment the opener ‘Endless Seconds’ started playing, it was obvious that Wyland knows not only where she comes from, but also where she is going and how to get there.

Wyland certainly isn’t into guitar solos, but into the creation of ambient guitar soundscapes, created by multi-tracked guitar sounds, particularly with reverb and echo, as if you were passing through a series of canyons, even caves in an imaginary spaghetti western. Sometimes through daylight, sometimes at night time, and sometimes in low flight through such (sound)scapes. The only thing you cannot be sure of is whether those spaces are somewhere on Earth on some other unknown planet. It is no wonder that her music has been used for sound installations in a number of exhibitions in Belgium as well as online.

Wyland at no point repeats herself nor does she overstay her welcome. The tracks last anywhere between a minute or so to less than five. As is the case with ‘To The Stars’, which sounds exactly as its title says. A particular standout is ‘Stealthy’, reminding of Cocteau Twins’ Robin Guthrie at his best. But Wyland is no imitator, she simply visits the similar places that guys like Guthrie and Henry Kaiser of Fred Frith did, just in her own way.