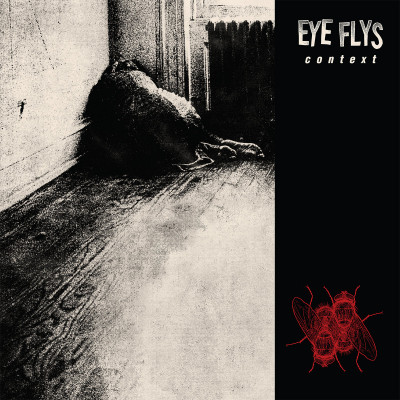 Philly undertakers, Eye Flys take their name off a song from one of metal’s most legendary albums, Gluey Porch Treatments, and are made up of some the metal undergrounds’ finest. Full of Hell guitarist Spencer Hazard, ex Backslider drummer Patrick Forrest, Backslider bassist Jake Smith on guitar and vocals while Triac’s Kevin Bernstein rounds off the noise terrorism on bass. Context is an EP that crisscrosses all sorts of styles of metal and hardcore that is righteously noise rock in approach that ranges from Unsane like vitriol, Melvins mono-lithism, Botch-esque dynamics, and Cherubs like red-lining even touches of grind and death metal obviously but slowed down at a mid-paced to a molasses like stomp. You’re probably wondering “hey newbie Echoes and Dust Reviewer I’ve heard all these descriptors before. Why should I even care?”

Instead of asking why you should care you should be asking what is noise rock. I’ll answer it like this. Imagine you are an egg. As this egg goes through life it is constantly but slowly cracking due to tragic events such as the death of someone you love, constantly failing at succeeding, putting up with abuse of any kind, or maybe something as minuscule as being cut off in traffic. Life can be essentially summed up as one long repetitive nightmare that continuously and meticulously crushes the human spirit. See what I did their? ‘Crushing of the Human Spirit’ is the best song off the EP hands down. Start there and dial it up to eleven.

As human beings these pressures weigh on us tremendously until we break and you better believe that everyone breaks. Once an individual explodes all that remains is a black hole of seething, smouldering, white hot, bloody rage with nowhere to go. Noise rock is the vehicle that channels this pain to ultimately perpetuate cathartic release through visceral sounds.

In this Context, Eye Flys succeeds whereas many bands in this style produce aggression for aggression’s sake. It is this reviewer’s opinion that Eye Flys lives up to what I understand to be the purpose of noise rock. I for one can’t wait to see how Eye Flys’s blackened road kill version of noise rock evolves on future releases.