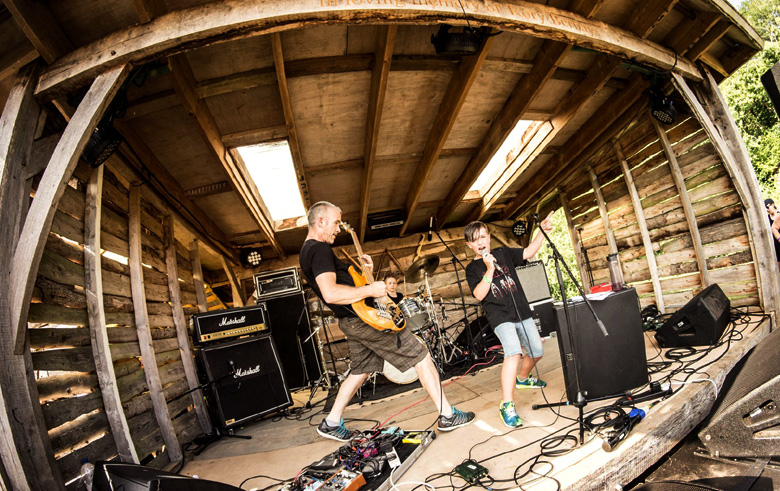 Here’s a treat for all ages – Haq123‘s opening set from this year’s Supernormal Festival.  We’re happy to say this is the first of several sets we’ll be sharing as captured by the good people of IMPATV over the summer. After taking a year off to recharge the psychic batteries, Supernormal 2019 was another absolute belter. Once again calling the tribe out from the weirder, darker corners of the forest for its unique blend of village fete and pagan festival.

Birmingham’s youngest exponents of metal, Haq123 bounced onto the scene a couple of years ago at Supersonic. They’ve already turned out two albums, (the second Heavy Mess came out last spring, a third is already in the works), played on a variety of excellent bills and were apparently knocking ’em dead at Reading’s doubledotbash just the other day. Child’s eye horror and surprising blasts of filthy sludge is what they do well. Here they get the weekend off to a fine start by churning out the pre-teen drone-doom like Kids Kids Kids Kids Kids Kids Kids.

The half hour set seems loosely split between moodier business in the first half and more raucous bangers in the second. The double whammy of classics ‘Machines Don’t Bleed’ and ‘Ugly Baby’ being a particular highlight. For the final ‘Deathmaker’ they’re joined onstage by an imposing cloaked figure with a scythe and a dancing alien. Then, their set done, they crowd surf offstage to some weird pre-recorded hold music. Precisely the sort of singular moment Supernormal excels at delivering.

In recent years IMPATV have done remarkable work documenting the UK underground’s wilder fringes building up an absolute treasure trove of performances from events like Supernormal, Woodland Gathering, Rocket Recordings’ 20th celebrations and more. As the weather turns cold and wet and festival season winds up you could build your own line-up from their youtube channel to watch in the comfort of your own home as you try and remember when sitting outside drinking still seemed like a good idea.

Along with this valuable record they also produce thier own experimental video work which they’ll be taking out on the road in November as part of Ensō Sone a collaboration with Japanese psych types Qujaku. (who incidentally also played a stunning set at this year’s Supernormal.)