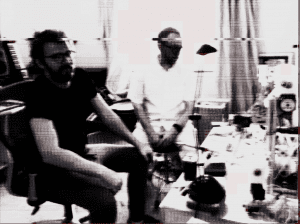 ØxØ (pronounced “null”) is a new collaboration between Brighton-based experimental duo David Berry and Barnaby Thorn. Barnaby Thorn “has released music on Carton-Pâte Records and Love Love Records under various aliases. After 2 years teaching in Berlin at a renowned music college Barnaby has composed, experimented in ambisonics/psychoacoustics and collaborated with other artists for interactive installations. Barnaby is now based in Brighton and has been working and dabbling in sonic engineering with his brother in Felix’s Machines (Mute) and with Plaid (Warp Records) for the past 4 years.”

David Berry is a digital media professor at Sussex University, a writer, producer, electronica artist and co-founder of the open-source label LOCA Records. “In 2017 he was a British Academy Fellow, researching a paper on “Reassembling the University: The Idea of a University in a Digital Age” which looked at how digital transformations were remaking what we think of as knowledge. This led to the funding and creation of the ØxØ project as a sonic installation before it was picked up by Truant.” Truant Recordings will be releasing the duo’s EP titled Mythologies on October 4th.

“With their forces combined, ØxØ consider their new EP a reflection on a damaged life – it’s a critique on the technological advances that have changed all our lives and further remove us from our surrounding world.”

Along with this project announcement, we also have the pleasure of premiering a track off the EP titled ‘Core (Overture)’. It’s a track that propelled me to space, brought me to my past and gave me a glance into the future. Check it out here: