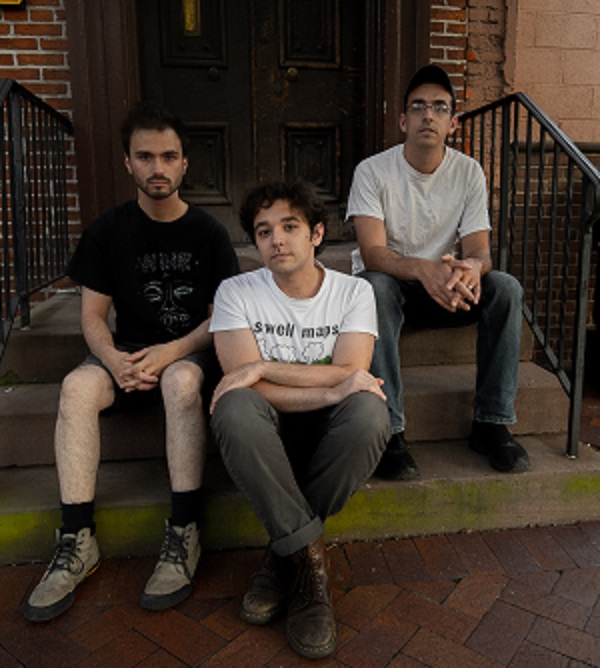 GLOOP are a three-piece noise band from Baltimore. On September 27th the band is set to release their sophomore album Smiling Lines via Grimoire Records (US) / Buzzhowl Records (UK). The album is made up of ten tracks that will blow you away. The longest track is just about three and half minutes long and although the tracks are short they definitely pack a punch. They manage to serve a full menu of noise/post-punk as a three-piece. I can’t even imagine how they would sound with added band members. An incredible listen from start to finish. Dare I write the following….GLOOP it on for maximum effect!

Today we have the pleasure of streaming the album in its entirety and the band have provided a track by track as well:

‘Buckets’ – My buddy Tanner helped with lyrics on the album. For the lyrics, we would listen back to demos and start to form lyrics around what it sounded like I was saying. This is one of the songs where he came up with a couple key lines and I was able to fill in the rest. This was one of the first songs I wrote that started to feel like us moving forward in our sound, so it’s a great kick-off for the album.

‘Your Heart Claps for me’ – A riff and a dream is born. A song that came together relatively quickly. Lyrically I was listening to Pere Ubu and seemed like something they may go for.

‘Fire’ – I think I rewrote this song three times. It is the oldest song on the album and has definitely gone through the most changes. I really liked the song, but it just did not feel right before. We rearranged a couple parts and added the slowed-down section. It’s about a talking blue cow burning a field of corn or something, Tanner wrote that one by himself.

‘The Tree Swayed’ – Blake had brought up wanting to do a dance song. We had both had gotten into the Contortions and loved their mix of no wave and James Brown flavor. We added the lead guitar last minute during the recording and fit well. The drumming at the end is one of my favorite parts.

‘A Dance for Michael’ – I had been using a vocal effects pedal, but stopped because it got to be a pain. So I just mimicked the pedal for the beginning. We added the slide guitar last minute which fit well.

‘Blue Bird’ – This song took a little while to finally have the structure down. We changed out the last bit of the song a few times, but overall a pretty quick song to write. Blake’s bass line through the descending guitar piece is cool. In general, I bring a song to the group; they add their own take. I never try to figure out what Blake is playing, he def came into his own on the album.

‘Stripes’ – This was the last song we wrote for the album. I showed Max the song and it was a bit of a mess. However Max had a cool drum part, we decided to start the song with just the drums and to come back to it again. I think we have played it out twice because it’s easy to get confused and lost. The song makes me wanna walk like a robot, thank Max for that.

‘Awake from the sky’ – I actually had the main riff from when I was 18 and had not forgotten it. I was trying to go for a Jesus Lizard vibe in the beginning riff, not sure if I pulled that off. Noel suggested the ringing guitar at the end, fit perfectly.

‘Turn inside’ – Another little dancey number. The ending is a nod to a contortions/James Brown break down.

‘Hole in the ground’ – This started with a riff I wrote when I was in another band, but never finished it. The song came together quickly and has been our closer when we are playing out. Max’s drumming really drives the song. I was trying to channel Dazzling Killmen in this one.