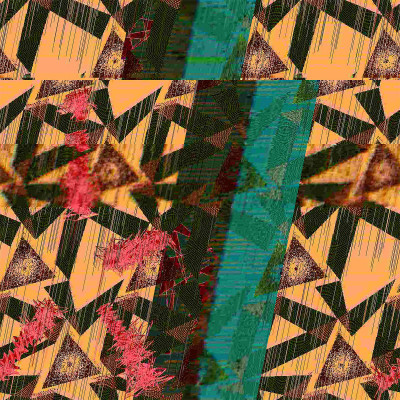 Here’s a sound that warms the heart. Dan Friel returns to hyper, in-the-red, keyboard instrumentals, this time with added horns. Fanfare is a lo-fi noise sandwich with candy sprinkles. They might be empty calories but you gots to take your joy where you can find it these days.

What a beautiful malfunctioning noise this is, instant pop tunes screaming out of misfiring electronics. Appropriately enough, it starts with ‘Opening Ceremonies’ which sounds like a fax and a modem having a heated exchange while the phone system tries calm the situation with some sunny hold music. It runs into ‘Auxiliaries’, the uneasy calm after that little storm and somehow even more broken. Younger readers who may not remember the voice of the time before broadband, try imagining the sound of toy robots being tortured and this page taking five minutes to load.

Nostalgia isn’t really the deal here, it’s just inescapably hardwired in. Friel’s beat up old keyboard at the centre of his sound is from the 80’s and he’s had it since he was a kid. He doesn’t lean towards the 80’s thing but it still carries some of that sticky artificial glow in its guileless tone. Maybe it explains the giddy childlike melodies too. After his last solo mission Life it seems he’d had enough of it, forming exhilarating power trio Upper Wilds so he could play guitar, sing about space, and have a rhythm section to keep him company. They’ve made a couple of fine albums and, as far as I know, will probably make more. Fanfare is a return to the cranky keyboard instrumentals, with added brass from former Parts & Labor collaborator Sam Kulik, Sunwatchers’ Jeff Tobias and Grasshopper’s Jesse DeRosa.

An added horn section seemed a wonderful idea but the result both is and isn’t what I thought we might be getting. The brass brings a contrasting warmth and variety but overall it seems underused and frustratingly low in the mix. It’d be amazing to hear some of these tunes blared out by the full power roar of a good horn section but it doesn’t happen. Imagine a New Orleans parade band tearing it up on the clattering, energetic ‘Beasts’ bouncing that ridiculously triumphant melody line off the sides of buildings. Rough and ready, fast and loose is very much part of the charm here but overall there is a slightly unfinished feel to the album. Like it could have been longer than half an hour, could have used a couple more really strong numbers, a little more love and attention. Perhaps in recognition of this it’s only a digital release, maybe the possibilities it opens are ones for future development.

This is not to say there isn’t fun to be had. Do people even make records that are fun these days? Fun to make, fun to listen to? Usually when people say ‘fun’ what they actually mean is ‘shit’. Isn’t it? Dan Friel makes noise records that are fun, there’s even less of them around. The noise is important, he doesn’t smooth off its abrasive edges towards more rounded noise pop either. The front and centre wonk and distortion counter balance his remarkable knack for melodies so immediate you feel like you already know them. In the ham hands of a clean cut pop punk boy band or polo shirted, moustachioed hipsters tunes this bright and direct would make you want to slap them. Harder than usual. But those people take themselves too seriously to write like this anyway.

‘Avalanche’ chugs long like a broken 80’s juggernaut out of control, the thin, white knuckle grasp the keyboard has on the tune making it wild and vital. ‘Fanfare’ starts with clean heraldic brass and then the corroded, overloading circuitry fizzes excitedly in. It’s a sweeping, chest swelling call to wider horizons, an anthem for old appliances, The Red Army Choir of planned obsolescence. The ‘Closing Ceremonies’ slur and lurch like the batteries are running down. The end sounding like the fax machine and modem have finally come to blows in the office kitchen. It sounds like one of those Christmas trees that plays music, dying. Live, to ramp up the rock ‘n’ roll excitement, Friel decorates his set up with Christmas lights, maybe that’s why I think he could make an incredible Christmas record, all those over familiar tunes buried in electrical glitch and fuzzy distortion. You gots to take your joy where you can find it. Only about 100 days to go.