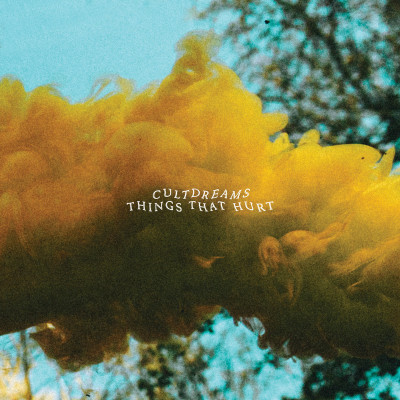 Things That Hurt by Cultdreams

When I was in Primary School in the 90’s we were asked to contribute to a time capsule and I was a bit confused about its purpose. At that young age I didn’t really grasp the things that time can change. I have no idea what I put in there, probably something useless about the football team I support, but it will be of little relevance to how life really was at that point in time. When I put on Things That Hurt, the second album by Cultdreams, the true purpose of a time capsule hit me like a tonne of bricks. Here is an album which lyrically captures the changing socio-political culture offered on a stunning musical background of shoegaze, indie and punk. There are so many layers which is staggering for a two piece and the depth of the personal lyrics is matched by the stunning instrumentation which wraps it all up in a package that is vast in its reach and unbelievably deep in its impact. This isn’t just a contender for album of the year; it may also be the album of a generation.

Quality pours from every single track in many different ways and the song that caught me instantly was lead single ‘We Never Rest’. Like a smile hiding the truth the verse and chorus operate as contradictions. Whilst honesty is nakedly spat out, the chorus offers up the age old line to “Just don’t worry, keep on going, everything is fine“. It is almost black humour as it is clear that things aren’t fine but we have to keep on going, pretending it is. The song is glorious in its execution in the truth it tells and this can be said of every song on the album.

Lyrically this is a very important release as it works through numerous topics such as gender, politics, sexual assault, behaviour at gigs, misogyny, growing up, depression, body image and more. Some of these topics are what lock the album to the current time period especially as a more frank and open discussion about mental health enters the public fray and guitarist/vocalist Lucinda Livingstone bears all. When it comes to misogyny and the ignorance of consent you really hope these topics become a part of history rather being relevant when the time capsule is opened. The lyrics are incredibly brave and brutally harrowing and are delivered with varying levels of passion or pain and around them all is a bed of memorable music. It really is a great feat.

‘Flowers On Their Graves’ and ‘Repent, Regress’ are two other songs that really blew me away with the former having shimmering fuzzy shoegaze soundscapes which creates a glorious uplifting sound against the abrasive lyrical delivery. The latter is a slow burner which explodes half way through when the chorus is belted out before a rising guitar solo tries to track it back down. Whilst these songs produce power through the combinations of music and vocals there are some songs which are stronger with less.

‘Don’t Let Them Tell You Otherwise’ and ‘Statement’ allow the painful honesty of the lyrics take centre stage as the guitar rests beneath and the drums take a break. These are two tracks which take you right into the depths of the things that hurt. ‘Statement’ is a real eye opener to the impact of inappropriate behaviour of men in bands whilst ‘Don’t Let Them Tell You Otherwise’ is brave to announce that “I’m getting help and I don’t want you around”.

Personally the band feels like a culmination of my lyrical musical journey as it gathers the political anger of Rage Against The Machine, the personalised storytelling of Thursday and the moral enlightenment of boysetsfire but with a very different set of life experiences. It is harrowing to hear a real articulation of the damage that men can have on someone’s life and the lyrics are about conveying the repercussions of the actions we all take rather than telling you how you should live. These messages should be heard far and wide and the power of the music is transformational in giving them the impact they deserve. The only tiny fault I can find with this album is the lack of a CD release.