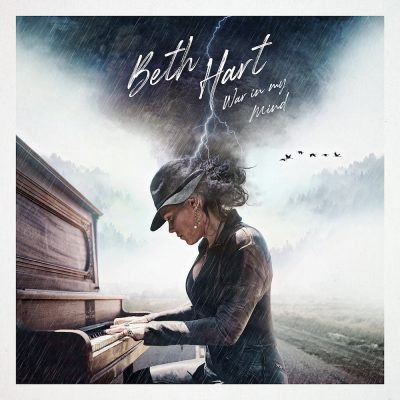 War In My Mind by Beth Hart

It was by chance that I stumbled upon Beth Hart. Yes, I had heard the name, an artist who is highly regarded in the Blues world and has collaborated with Joe Bonamassa but apart from the occasional hearing of a song or two, that was it. However, on occasions you see an artist in a live performance which is the difference for tipping you towards really appreciating them and investigating their back catalogue.

It was the cancellation of Monster Magnet at this year’s Ramblin’ Man festival which led me to the Blues stage to see Beth Hart deliver a headline set-of staggering honesty, laying out her life out in the open without it feeling intrusive, and what a performer; powerful, enthralling. A sense of all-of her life experiences are absorbed into her one hundred per cent heart and soul performance.

For ninth album War In My Mind, produced by Rob Cavallo (Green Day, My Chemical Romance, Dave Matthews Band, Goo Goo Dolls), is largely Beth Hart as singer-songwriter. Many of the songs are piano led and most sound like the writing process at the very least started on the keys. The album cover – Beth fully engaged at the piano with storm clouds up above – is a good reflection on how Beth approached this album and how the record does sound. And many of the twelve songs are honest confessionals relating to many aspects of her life from her battles with drug addiction, Bipolar, hurtful childhood memories, and family bereavement. Lyrically, she doesn’t hold back.

As many of the songs are deeply personal the piano as chief instrument is fitting. The title track is a brutal assessment of her earlier years of drug addiction. It is a suitably emotive ballad with an epic rousing chorus which resonates the painful time. The toning down of the epic sound on ‘Sister Dear’ is carefully done and the result is an extremely poignant song on the deep feelings of loss and memories for Beth’s now departed sister. While ‘Without Words In The Way’, upright bass leads into piano and a softer, brushes shuffling rhythm are set behind Beth’s smoky croon.

The paired down piano led songs are interspersed with full band up-tempo numbers which get the groove going. Take ‘Bad Woman Blues’, a co-write with Rune Windberg, the main melody has echoes of Steve Miller’s ‘Abracadabra’ but this is a badass attitude, infectious raw Blues anthem which sees the protagonist declare ‘‘I’m the queen of pain.” The bluesy upbeat swagger of ‘Try A Little Harder’ is another example of impeccable song-writing. While ‘Sugar Shack’ has a high-hat disco beat for foot tapping, hips swinging stomp.

There is hardly a millimetre of flab on any of the twelve songs. If I am to split hairs then a couple of the songs might have benefitted if the polished production was unshackled and loosened up a bit, to give them a rougher edge. But, that aside War In My Mind consists of a strong set of very well-crafted songs by an artist who is worthy of modern day Blues superstar status.