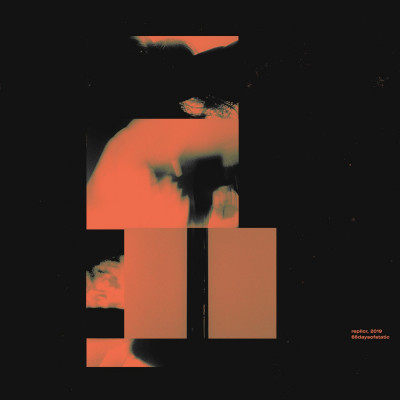 65daysofstatic are not a post-rock band.

You could argue that that statement has been true since the release of 2010’s We Were Exploding Anyway, where they took their enormous sound and wrung it through a techno blender. But their unofficial score to Silent Running, their official score to No Man’s Sky, and their score to Wild Light, a movie that doesn’t exist anywhere but in the minds of those who heard that album, have moved the band ever further from any real definable genre. At best, 65daysofstatic are now a post-techno/glitchcore/codecademycore band. Perhaps even the first of their kind.

replicr, 2019 is the result of several years worth of investigations into producing soundtracks, and guitarist/programmer Paul Wolinski’s dalliances with using software to create soundscapes. Where 2013’s Wild Light had an almost tender, glass-like humanity to its futurist dystopian sounds, replicr, 2019 sounds like the result of forcing a bank of computers to listen to thousands of hours of music, then telling them to make something that humans can dance to. The end result is an album that it’s almost impossible to dance to, because why the fuck would the computers do what a human demands of them.

We have tracks like ‘bad age’, a song with a beat and a melody, sounding like a computer trying to communicate with a human, following ‘d|| tl | | |’ which is little more than a soundscape trying two tracks together: the sound of an automated scrapyard in the rain, robots going about their business while people are nowhere to be seen. There’s ‘sister’, a 4:23 crescendo that never really builds to anything, coming before ‘gr[]v-_s’, the 90 second sound of a scanner bot hovering above the streets of a rundown city, still looking for people that have been dead for decades.

There are moments of genuine beauty to be had on replicr, 2019. Most notably ‘interference_1’, five minutes of plaintive, layered synth, a delicate melody teasing from the first minute on, building to something ethereal, something pure. Put on your good headphones, turn up the volume, close your eyes and let each layer wash over you, let it take you somewhere prettier than the political hellscape in which we now find ourselves. Let 65days show you a better future than the one we’re hurtling toward. ‘trackerplatz’ is also a high point, it’s insistent electric piano intro drawing you in towards the sound of some great creature crying out for its lost family. Here we get a glimpse of what makes a 65days live show so utterly captivating, the feeling that they’re building up to something enormous, something that will blow the roof off, something that will make us all transcend to someplace better. And then it ends, the way ‘Safe Passage’ ended Wild Light; halfway through a bar and leaving us wanting to cry in unfulfilled frustration.

But ultimately replicr, 2019 is missing something. It has no heart, which is the point perhaps. Computers have no heart, they’re entirely logical devices. You tell them what to do, and they’ll interpret the rules as you’ve laid them out. But it’s difficult to reconcile the band who made this album with the one who made Wild Light. Wild Light is so densely packed it gives the listener something new with every listen. replicr, 2019 feels sterile, dead almost.

When I reviewed Wild Light six years ago, I couldn’t help but hear it as the soundtrack to a movie. In my mind, each track lined up with a scene from the likes of Bladerunner, or Escape From New York. replicr, 2019 feels like the second disc you get in the special edition version of the soundtrack CD, the incidental music, deleted tracks and outtakes.

It’s not a bad album, but it barely feels like an album. There feels like there’s no cohesion from one piece to another, a 42-minute collection of ideas that didn’t make it on to Wild Light. On the most recent episode of the band’s promotional podcast, Joe and Paul discuss the making of replicr, 2019, and explain that it was very much a reaction to their work on No Man’s Sky, the logical conclusion of having to break the restrictions under which they had to compose. They explained that during the production of No Man’s Sky, they learned more about algorithmic procedure of music, and used that to make sounds that didn’t fit the requirements for the game’s developers. So they took that music and made it true to the band.

The problem is that it seems evident that the music doesn’t have the heart of human creation at its centre. It sounds procedurally generated. But like I said before, perhaps that’s the point, perhaps that’s the vibe 65days were going for. In which case, replicr, 2019 is a resounding victory. All I know is that I’ve now listened to it a good twenty times, and have yet to connect with it in any meaningful way. Perhaps you’ll find more success with it.