(((O))) Review: Uniform & The Body – Everything That Dies Someday Comes Back 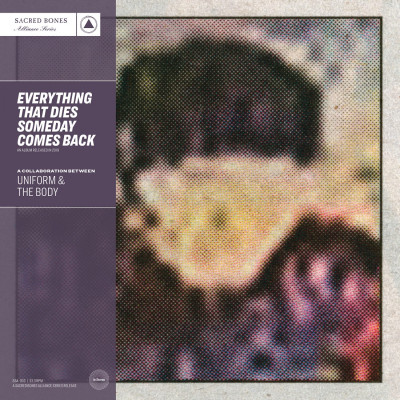 Everything That Dies Someday Comes Back by Uniform and The Body

Hot on the heels of their 2018 collaborative album, Mental Wounds Not Healing, veteran Rhode Island experimental metalheads The Body and Brooklyn industrial noise rockers Uniform team up again for Everything That Dies Someday Comes Back, another bleak dive into the realms of industrial electronica. Claiming bands as diverse as Swans, Ministry, and New Order as influences, along with the aim of reaching “the middle ground between Robyn and Corrupted, but weirder”. Uniform’s Michael Berdan handles the lion’s share of the vocal duties, bellowing out the songs with hibys trademark aggressive, sinister scowl. Backing vocals are supplied by The Body, who contribute the same repetitive single-pitched scream that dominated the vocal sound of their 2018 album I Have Fought Against It, But I Can’t Any Longer. This is the album’s key source of irritation. This scream is used over and over ad nauseum and is so high up in the mix that it overpowers most of the songs’ other musical elements, making them difficult to distinguish from each other.

The scream makes its first appearance on opener ‘Gallows in Heaven’, which has some atmospheric, low guitar rumblings that are a pleasure to listen to before being drowned out. Another drawback with this album’s sound is the repeated use of drum machines rather than actual drums. It’s presumably intended to be congruous with the preponderance of synths on the record and there’s nothing wrong with that as an aim, but it has the unintended consequence of the album’s percussion sounding weaker and tinnier than it could have done had actual drums been used more frequently. ‘Vacancy’ is a good instance of this problem occurring and it is compounded by The Body’s screaming vocals rearing their repetitive head again.

SRSQ’s ethereal vocals on ‘Patron Saint of Regret’ are a further mis-step, as they sound like they’d be better suited to a dream pop song. Similarly, the synths on ‘Penance’ do not help imbue the song with the sort of doom-laden, sinister mood with which Uniform and The Body presumably intended them to; they sound more like they’ve been lifted from an 80s throwback synth-pop group like Yacht Club. ‘Day of Atonement’ is distinguished by what has preceded it by featuring what sounds like a hip-hop beat. This factor, combined with some strong power chords and distorted backing vocals, makes it one of the album’s strongest songs. Similarly, album closer ‘Contempt’ is elevated above all the album’s preceding it by the use of a sample of what sounds like a drill sergeant voicing his hatred for the addressee, dank, moody riffs, and actual, proper drums that are played loudly and heavily enough so as to prevent the song from becoming dominated by the ubiquitous screaming sound.

While the last two songs do go some way toward saving Everything That Dies Someday Comes Back, there are multiple problems with the album, not the least of which is the ostensible underlying assumption that in order to create dark, moody sounding industrial music, percussion shouldn’t be pounding or heavy and the music should be drenched in incongruous sounding poppy synths and annoying screams that rapidly lose their initial impact. The album lacks the innovation of The Body’s I Have Fought…, which tackled similar material but in a more thoughtful way that incorporated semi-operatic and spoken-word vocals, and the raw power of Uniform’s excellent The Long Walk. That being said, die-hard fans of both bands and industrial and electronic music in general may want to check this out.