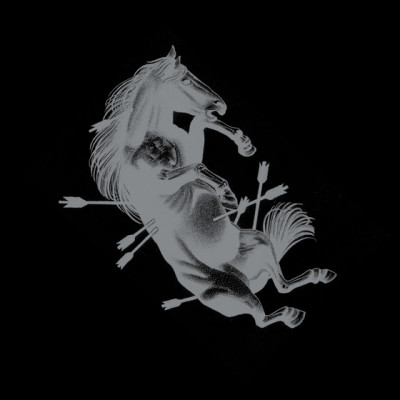 After garnering US chart success and widespread critical acclaim for their fourth studio album, 2016’s Stage Four, Los Angeles post-hardcore quintet Touché Amoré have decided to mark the tenth anniversary of their 2009 debut, …To the Beat of a Dead Horse, by reissuing it in a limited edition, two-disc vinyl set with an accompanying book. The first disc features the original album while the second disc features an entirely new recording of it by the band’s current line-up, including the rhythm section who weren’t in the band when the original was recorded. The new recording was mixed by Converge guitarist Kurt Ballou and is intended to represent more accurately how the band play the songs now in a live setting.

Opener ‘…And Now it’s Happening in Mine’ begins with the sound of handclaps while an amp is turned on and a guitar feeds back. Frontman Jeremy Bolm then begins screaming angsty lyrics about how “we’re just a parody of ourselves and I’m wasting all my [time]”, with an old lyric about how he seeks inspiration from Morrissey now (perhaps wisely) altered to say that he turns to the late Leonard Cohen for such purposes. Live favourite and frequent set closer ‘Honest Sleep’ then follows, one of the many songs on here about Bolm’s (then) dislike of his hometown of Los Angeles. One of the accomplished things about these new recordings is the way in which the lead and rhythm guitars are more compartmentalised than they were on the originals, often occupying entirely separate channels. However, producer Zach Tuch doesn’t manage to make Nick Steinhardt’s guitar line just before the chorus in ‘Honest Sleep’ soar over the rest of the instrumentation quite as highly as it does at the band’s gigs.

The same can be said for Zuch’s handling of Steinhardt’s lead guitar on ‘Cadence’, but an interesting addition to the latter song that wasn’t present on the original album are bassist Tyler Kirby’s backing vocals. ‘History Reshits Itself’ is perhaps the song on side one that sounds the most sped up in comparison with its original incarnation. Geoff Rickly from Thursday reappears with a new version of his guest vocals, his voice sounding considerably raspier a decade on. Modern Life Is War frontman Jeffrey Eaton sounds less hoarse on his newly recorded backing vocals for ‘Always Running, Never Looking Back’. Along with closer ‘Nine’, the new cut of ‘Suckerfish’ serves as perhaps the best demonstration of Ballou’s mixing abilities, with the guitars sounding much fuller and more vivid than they did previously. Elliot Babin’s new drum intro to ‘Broken Records’ highlights how much he has improved the band’s musicianship since he joined. He maintains this furious pace on ‘Nine’.

Ultimately, this re-recording of a ten-year-old album did what it was intended to do in my eyes. It conveys the sound these songs have as played by Touché Amoré’s current line-up and gives them an additional power that wasn’t previously there through the involvement of more seasoned production and post-production personnel. Whilst some may dismiss this idea as a gimmick, for this reviewer …Dead Horse becomes a more accomplished work because of it (as one would perhaps hope, given that the songs are being played by musicians with ten more years’ experience under their belts). Given the number of iterations certain album tracks go through as bands play them live over the years, it’s surprising more acts haven’t employed this strategy on tenth-anniversary reissues of albums, as opposed to whacking a load of demos and session recordings on an additional slab of vinyl. Whilst it will probably only appeal to existing TA fans rather than newcomers to the band (and this is reflected in its pressing of 1,500 copies), it will likely be a difficult-to-resist purchase for the former group of people. It will also work well as a nice foretaste of the band’s forthcoming European tour, during which they will play …Dead Horse in full.