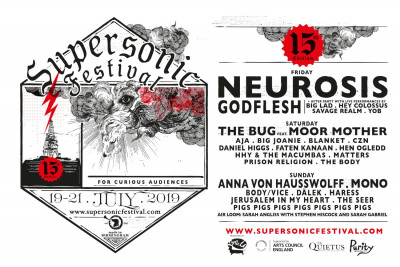 Neurosis are a band who are just right for Supersonic and it seems fitting that they are playing at the festivals fifteenth anniversary. The fact that the band’s headlining performance at this year’s opening night was in the grand setting of Birmingham City Hall seems perfect. From start to finish, Neurosis engulfed the audience with their vast music, with the vocals of Steven Von Till and Scott Kelly filling the City Hall with ease as the band’s epic soundscapes engulfed all of us. With the sound being spot on, the true power of the music of Neurosis was there for all to hear and the band delivered an awe-inspiring performance. Drawing on their most recent material from Fires Within Fires and Honor Found In Decay as well as tracks from A Sun That Never Sets, Given To The Rising and Times Of Grace, the band showed exactly why they are so revered and continue to be. Stunningly heavy and, at the same time, sublimely beautiful, this will go down in Supersonic history as a truly epic performance; and as the final notes of ‘Stones From The Sky’ filtered out, there was no way anyone who witnessed the set would disagree.

Back at the actual festival setting in Digbeth, the opening-night afterparty kept it heavy with Savage Realms’ mixture of black and death metal along with a side of classic heavy metal, which ticked all the boxes for a headbangers dream. The band gave an energetic performance from start to finish that paid tribute to Birmingham’s status as the home of metal and showed Supersonic’s love for music’s heavier side. Yob followed, playing a shorter set due to curfew restrictions, but still managed to dazzle and mesmerize the Supersonic audience. With their latest album Our Raw Heart reenergizing them, it was great to see them back onstage; and the band drew from their formidable back catalogue with the likes of ‘The Lie That Is Sin’ and ‘Breathing from The Shadows’ being particular highlights. Having been used to seeing epic Yob performances, this shortened version seemed different; but the band still put in a brilliant performance and ended the first day on a sheer high.

Blanket’s vast soundscapes are a treat for the ears as their music consumes all that have gathered at The Warehouse. The Blackpool band played a passionate set, packed full of raw emotion and all set to a cinematic rhythm that engrossed the crowd. Blanket are definitely a band to watch as their epic music enchanted all who saw them play this majestic set.

Prison Religion bring the intensity to Supersonic with a superb set that sees the duo onstage deliver hip-hop beats with powerful vocals in a startling manner that shakes The Crossing to its foundations. Their industrial take on rap has the audience enthralled, and the cathartic nature that their music takes is immense. A powerful experience all round.

Matters’ vast electronica engulfs the room as soon as they start playing, and the Birmingham band do Supersonic’s heritage proud as they play a captivating set with their monumental music delighting those in attendance.

HHY & The Macumbas are a delight for the eyes as well as the ears as their shamanic rhythms enrapture The Warehouse audience. The band’s dub, jazz-and-beyond mixture is intriguing as you start listening, but it soon encapsulates everything that is right with live music. You can’t take your eyes off the stage and the band give one hell of a performance.

The Body should come with a warning regarding how visceral they are as a live band, and the packed crowd that witness them at Supersonic are pummelled into submission throughout their set. Chip King and the rest of the band are on stunning form as they annihilate the room in what has to be the heaviest set of the festival, and up there with the heaviest in Supersonic’s storied history. Simply brilliant – a lesson in how to deliver the most powerful music in existence.

The Bug is delayed in coming on but this actually works in the performance’s favour, as the feeling from the frontline was one of anticipation; and when special guest Roger Robinson took to the stage to deliver a powerful spoken-word intro referencing the Grenfell disaster, it was met with a powerful silence; that silence turned to awe as Moor Mother took to the stage and delivered a commanding performance filled with poetry and anger as the audience roared their approval. As the energy built and built, she unleashed an even higher level of power as The Bug dropped classics like ‘Poison Dart’ and particularly ‘Skeng’ for her to rap over with ease. As if this wasn’t enough, Miss Red followed onstage and delivered a fearsome performance over The Bug’s acid ragga and dancehall beats to end the Saturday of Supersonic 2019 on a note of utter bliss. A performance that will long be talked of in Supersonic lore.