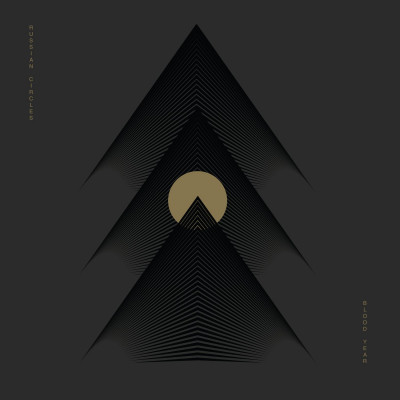 In the world of ‘post’ music Chicago instrumental trio Russian Circles is quite prolific. Blood Year is album number seven in 15 years as a band and 13 years since its debut Enter. Considering the number of band members and an album around every two years the ground that has been covered in the back catalogue is very impressive. With Blood Year Russian Circles solidifies its trademark sounds, manages to push into new territory and even has time left to throw in tracks that can be considered some of the best yet.

Russian Circles do have a few trademark sounds that flow through Blood Year just as they have in the previous releases. From the unmistakable deep, heavy bass sound of Brian Cook, the light fingers and heavy tones of guitarist Mike Sullivan and the extraordinary drumming of Dave Turncrantz, Blood Year has all the moments fans love. ‘Arluck’ ticks all these Russian Circles boxes and hammers along at a great pace and makes a grand start to the album but amazingly it is quickly eclipsed by the absolutely storming ‘Milano’. I am fairly confident this hefty beast will become a new live favourite. The mix of heavy bass, drums and tremolo guitar leads you to a blind summit where you are lashed with flushes of blast beats in a post-black metal crescendo before the band gently guide you back from the edge, although the darkness has now descended on the album.

‘Kohokia’ starts at a very slow gloomy pace but it picks up a notch again before ‘Sinaia’ hits another high point. The guitar crescendo here is held aloft by the merger of the drum and bass depth before it topples it all down to build again in echoes of the artwork. It is another glorious piece of musicianship which tries its hardest to shine a light in the dark. Closing track ‘Quartered’ uses the hypnotic thick chugging guitar tone that reaches out and forces your head to move in time whilst the bass pummels into your ear canals. Whilst it never lets up it never seems to fully explode in the manner of ‘Harper Lewis’ which it sounds like it was building too.

It was only a few years ago that I discovered that Russian Circles seems to be a bit of a Marmite band, people seem to love them or hate them. Maybe I had been a bit sheltered as everyone I know who likes similar music loves them. My gig buddy Julie and I took our beloved partners to a Glasgow gig in 2016 and my wife was pregnant at the time and used discomfort as an excuse to leave after three songs. Lisa made it to the end before labelling them “offensively bad”, it turns out my wife had the same opinion. Julie and I now use Russian Circles as a scale to judge bands and how much our wives would hate them. Obviously Blood Year ranks high on the Russian Circles ‘Lisa will hate them’ scale but along with a moodier sound, darker territories and numerous high points I would have to advise all; don’t be a Lisa, listen to Russian Circles (apart from Lisa – you won’t like it).