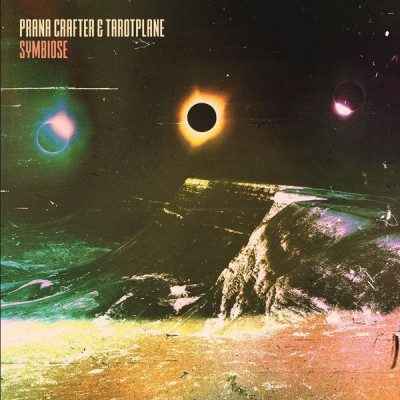 Symbiose by Prana Crafter and Tarotplane

A meeting of minds between Will Sol (Prana Crafter) and PJ Dorsey (Tarotplane) on Will’s last album Enter The Stream may well have caused a flurry of rippling waves within the psychedelic vortex as we are now presented with their first full release together, Symbiose. Curated for the wonderful Beyond Beyond Is Beyond label, it presents two fully formed tracks from each artist, and whilst they may not collaborate, there is more than a hint of symbiosis in their music.

What is perhaps most intriguing about this release is that it allows the artists free reign to expand their music. This is particularly noticeable for Prana Crafter, who whilst on his albums creates lovingly trippy sequences of shorter songs, albeit ones which make up a whole thematically, here he simply goes with the jam. Much like his beloved Grateful Dead, the aim is to explore and search, rather than reach a particular goal.

‘Jagged Mountain Melts at Dawn’ may very well be an ode to the the surroundings that Will makes his music within, although the often pastoral sound is stripped right back to something much more menacing here. Perhaps highlighting the dangers that nature can present, its ominous pace is beset by a calming influence as you picture the morning mist rolling down the mountain tops. It is what Will does best, and as he draws you in, it becomes a very sensory listen as you can almost smell the ferns of the plants and the wet mist caressing your cheek.

Tarotplane go for a different approach on ‘We Move Slowly Through the Past’ and where Prana Crafter sticks to the natural world, this track heads for both outer and inner space. Gathering echoes of Pink Floyd (with more than a hint of Echoes in this track), it’s elongated structure plays along as it dances to what could almost be whale song. Rippling guitars keep the pace as it twists its way into deeper space. From mind to soul, it seeks to gravitate you from your body.

Once it hits space, there is only bliss, and a feeling that with this release we may be listening to two artists who are unafraid to explore what psychedelic music can actually be. Reflecting the dichotomy of nature and urban expansion that is America, you get a sense of constant fluctuation and change, but with it, a very symbiotic dance of life. It is music of the wind, of change, and of expansion, as it seeks to understand the very world we live in. That it also has a very calming effect too, reveals that deep within psychedelic music is a trigger which joins us as people to the world around us. It’s something recognised by the original natives of the US as they prepared psychedelic concoctions in order to become one with the surroundings. In this instance we have replaced the drug with the music, but of course, feel free to use both. A mind expanding trip from two great artists of the psychedelic scene.