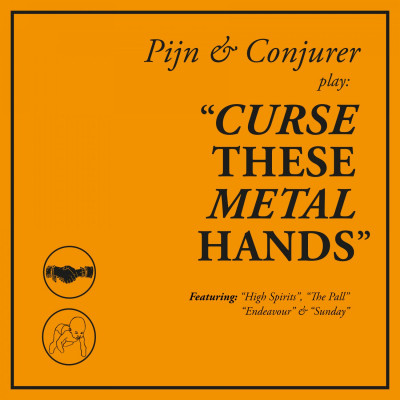 Curse These Metal Hands by Pijn and Conjurer

Two of the UK’s most exciting bands, Pijn and Conjurer team up to release a collaborative work entitled Curse These Metal Hands. This project was initially earmarked to be played as a collaboration set at ArcTanGent (which still happened, miss it at your peril along with a date in London), but the two bands have also released it as a record and it is with great thanks that they have, as this is one hell of a collection of songs. The idea of this collaboration is a tantalising enough thought but the actual realisation of the music lives up to the expectations and then some.

Curse These Metal Hands begins with ‘High Spirits’ with its soaring intro that builds and builds before getting heavier and then finds a balance that complements the two moods perfectly, and it is the two sounds of Conjurer and Pijn that work together to make such a sublime noise. The track combines so many elements to create an epic track that is a perfect way to start things off.

‘The Pall’ follows and continues that soaringly triumphant start with some properly hazy riffs that shimmer over a pounding grounded rhythm before the riffs (along with some fearsome growls) turn into something more sinister. This is short lived however as the track transforms into elements of post-rock, doom, black metal and hardcore with consummate ease, all the while still glowing with positivity and joy and it is these twists and turns that makes Curse These Metal Hands so intriguing and engaging.

The discordant ‘Endeavour’ is up next and initially seems to be channeling Amenra with its punishing howls and cathartic vibe, but in its own way, never losing its quest to keep the listener engaged with many different ideas going on, and the heaviness that emits from the speakers is captivating.

The monolithic ‘Sunday’ finishes things off in grand style, with some truly powerful vocals over a bed of life affirming music that makes you want to take on the world before exploding with passion and ending just as it began, with a true and triumphant feeling to it that morphs into a beautiful ending that combines heaviness and more mellow sounds with a raw passion that can’t be faked.

Even though there are only four songs, it seems like a full length album due to the sprawling nature that the tracks form and even ‘Endeavour’, the shortest thing on here at around three minutes in length, packs so much into its duration, it seems like it lasts for twice as long and that is definitely a good thing.

This is music the world needs to hear and fans of latter day Baroness and Mastodon especially will find plenty to adore here. It’s heavy and it’s happy too. It’s ambitious, but accessible and above all its downright triumphant. The best music always captures a combination of feelings and captures one of joy and triumph so perfectly and effortlessly and that definitely sums up the listening experience here. Curse These Metal Hands is a total success and one that both Conjurer and Pijn should be rightly proud. Here’s hoping this is not the last we will hear of them together.