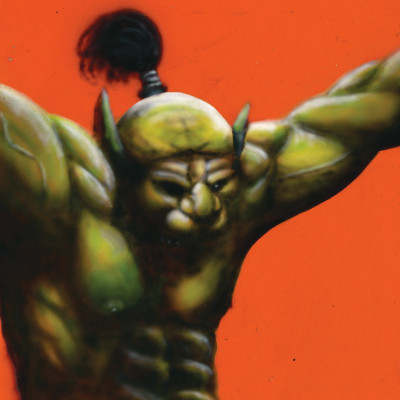 Releasing albums at the rate of at least one a year, the prolific nature of Oh Sees (as they are known at this moment in time, but always subject to change) has provided their fans with an almost continuous stream of music to indulge in. Even more impressive has been the run of form that they have been upon since at least 2012 with their intense Putrifiers II, not that anything before was of a second rate nature either. Indeed, Help and Castlemania remain classics within their back catalogue.

It is to the later releases that we find the band, or John Dwyer in particular, exploring a more interesting and progressive rock sound. After last year’s superb Smote Reverser, which instilled heavy metal riffs with Motorpsycho style meanderings, it was anyone’s guess where they may end up next. The results are Face Stabber, their 24th official album, and one which once again takes a complete left turn from what has gone on before.

Anyone who has heard Dwyer’s Damaged Bug project may find the seeds of that within Face Stabber. The itchy, nervous rhythms replacing the heavy riffs of the last album, bringing a much more percussive style of delivery. Over this, the band develop an intertwining mesh of riffs, jagged guitar solos and wonky keyboards, all embracing a sound which is equal parts tribal techno, thrash metal, and prog rock. It’s an intriguing mix developed over the space of a double album, allowing for much movement between the myriad styles on offer.

Through it all, is an underpinned experimentalism and wayward abandon which, whilst it doesn’t always work out and drifts into the middling such as on ‘Poisoned Stones’, when it hits the heights of ‘Scutum & Scorpios’, it elevates the album into some quite spectacular. It is here that the band hit their stride as they elongate the jam in the first of two expansive pieces (the other being ‘Henchlock’ which closes the album). Giving the freedom of space, the progressive roots of the music become the heart and soul of the album.

In between there is scratchy hardcore punk, weird instrumental interludes, metal riffs, and through it all, those incessant rhythms that never stop from the opening of ‘The Daily Heavy’, right through to the skronky ‘Henchlock’. It’s the throbbing heart of the record, becoming a propulsive force as it invades each track, bringing an intense life to it all. It’s also further proof that Dwyer and co are riding an extreme high at the moment, with no sign of dropping off the pace just yet. What a time to be an Oh Sees fan as they once again release an album of impressive pleasure. It may not be as immediate as their last release, and its length may put some people off, but for those prepared to give up a couple of hours to it, they will find a remarkable piece of work.