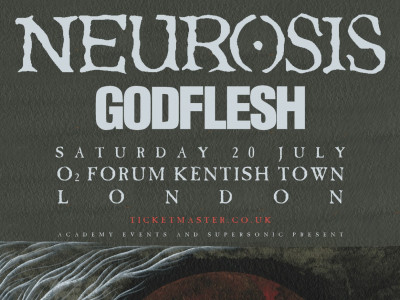 If you look up ‘All-star line-up’ in the Oxford English Dictionary you’ll find an entry that looks like this:

Having looked it up, then, you’ll start to understand why I only managed to catch most of one song from Yob, having battled my way along the transport network after work to catch a 6.30 kick-off. So it’s a good job that that song was ‘Our Raw Heart’, fifteen minutes of heart-wrenching, heavy beauty. Standing at the back, the extent of Yob’s extensive emotional soundscapes becomes clear as lush guitars and Mike’s soaring voice expand to fill all corners of the venue. The Forum is already pretty full with people from the outset, getting in early to catch Yob and keep a good space for this sold-out show. I’m a bit gutted to miss most of their set, to be honest, considering how powerful they were at the Garage last year. If you’ve seen them live, too, then you’ll know that hearing Yob on record is one thing, but on stage they truly know how to make doom sound beautiful as well as ugly.

Not as ugly as Godflesh, mind. Few things in life are. There’s something wonderfully unceremonious about Godflesh: plug in laptop, guitar and bass; tune up a bit; and launch straight into ‘Sterile Prophet’ with little notice. I guess this might bore some people, who like to watch a live drummer smashing around or something other than two angry looking, largely stationary guys in t-shirts making cold, miserable music. But we all clearly love it. It looks like Justin brought his 8-string guitar tonight, sounding so low-tuned and mechanical that it’s basically a purely rhythm instrument. There seem noticeably fewer weird effects on Justin’s vocals for ‘Predominance’ than on record, which is a minor gripe, and it could just be where I’m standing. Occasionally the pummelling beats stop and a clean guitar rings out. What’s this? A new song, a soft break? No, that’s just the end of the song. Two seconds to tune, three cymbal hits, and the beat’s back in again. ‘Merciless’ from the 1994 E.P. certainly lives up to its name: unrelenting audio violence. There’s a wonderful mix of trip-hop beats, catchy chugging riff and especially caustic vocals on ‘Post Self’, a real crowd-shaker, then running straight into a personal favourite, ‘Parasite’, which I’ve only just clocked sounds a little like an industrial version of Sepultura’s ‘Straighthate’. In a good way. 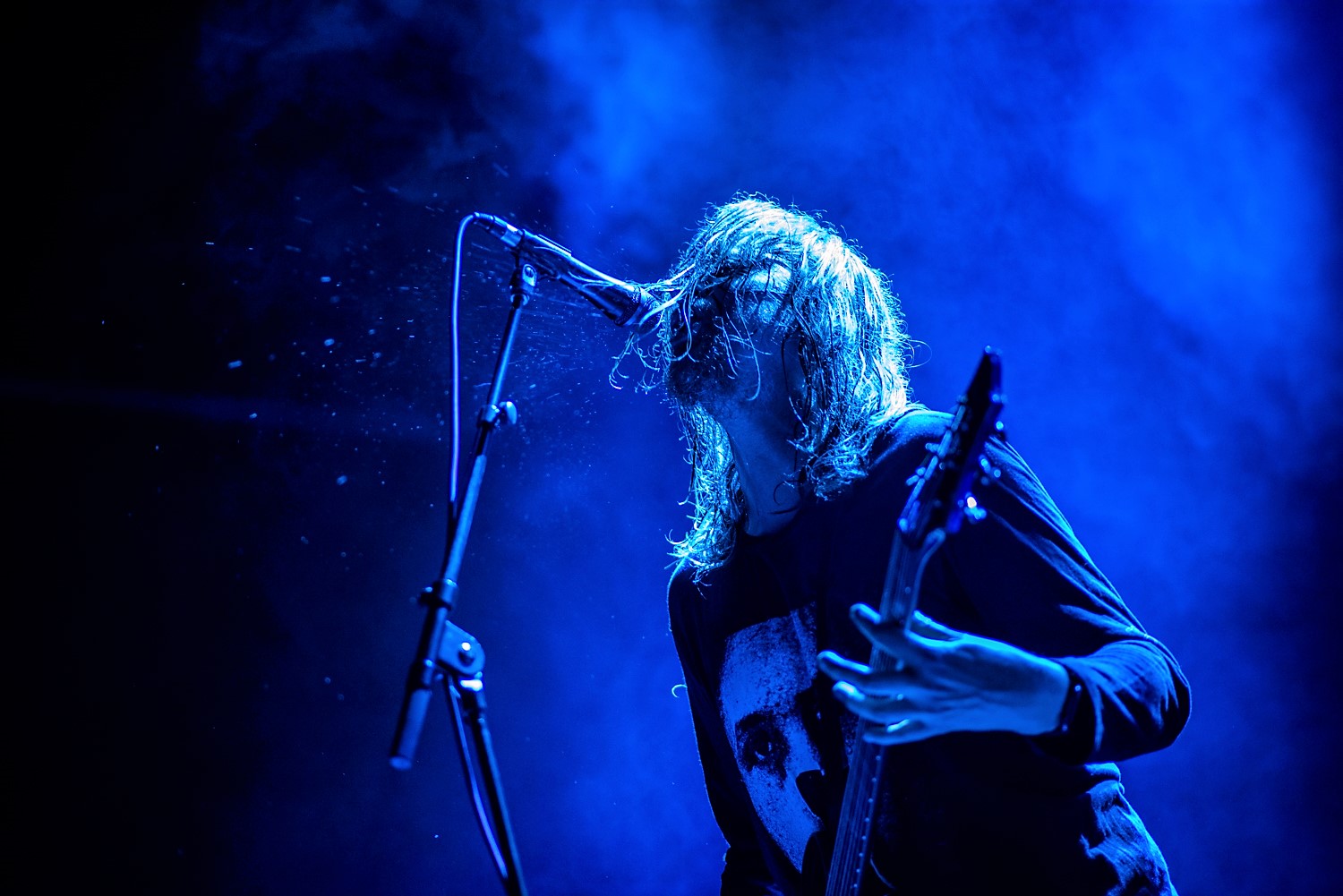 When the drum machine cuts out for the final time and the lights go up, leaving a harsh blanket of feedback, it feels like a pretty short set, even as supports rather than dual-headliners, but actually six or seven songs takes us up to a solid half-hour of sonic torment of the very best kind.

Living up to their name, Neurosis produce sonic torment of a different kind and they aren’t going easy on us tonight. Opening with the title track from 2001’s A Sun That Never Sets, this first five minutes of slow, brooding menace showcases quite a degree of the band’s diversity in one song.

I should admit at this point that seeing Neurosis tonight is something of a personal experiment. I saw their two vocalists/guitarists (Steve Von Till and Scott Kelly) performing incredible solo acoustic sets at the Roadburn Festival in 2016, as well as greatly enjoying Von Till’s contribution to the BloodMoon ensemble (alongside members of Chelsea Wolfe, Converge and Cave In). I’ve heard quite most of their regular studio albums, loving the rougher early classics like Through Silver in Blood, yet it’s their collaboration with Jarboe – quite a different beast altogether – that I spin the most, a record which I understand is somewhat controversial amongst fans. So, I’m very keen to see how I get on with a regular Neurosis live show.

The first thing I’m struck by, seeing Neurosis proper for the first time, is the power of Steve Von Till’s vocals. He has a fine voice for baritone ballads, but damn can the man bellow when he wants to! The second thing that strikes me is the quality of their lyrics – not something I focus on all that often in extreme metal, it has to be said, especially when watching bands live.  I can make out the penultimate verse of ‘My Heart for Deliverance’ pretty clearly, especially the line about “Views eternal from a sunken eye/Over a bride of spectral light/Winds wither, rake, and weather/Prophecy flows in whispers”, even if I looked them up afterwards for this review. I’m reminded of Soundgarden’s Down on the Upside era on this track, mixing a crisp heaviness with gentle folk passages, moments of calm piano, and spoken samples. 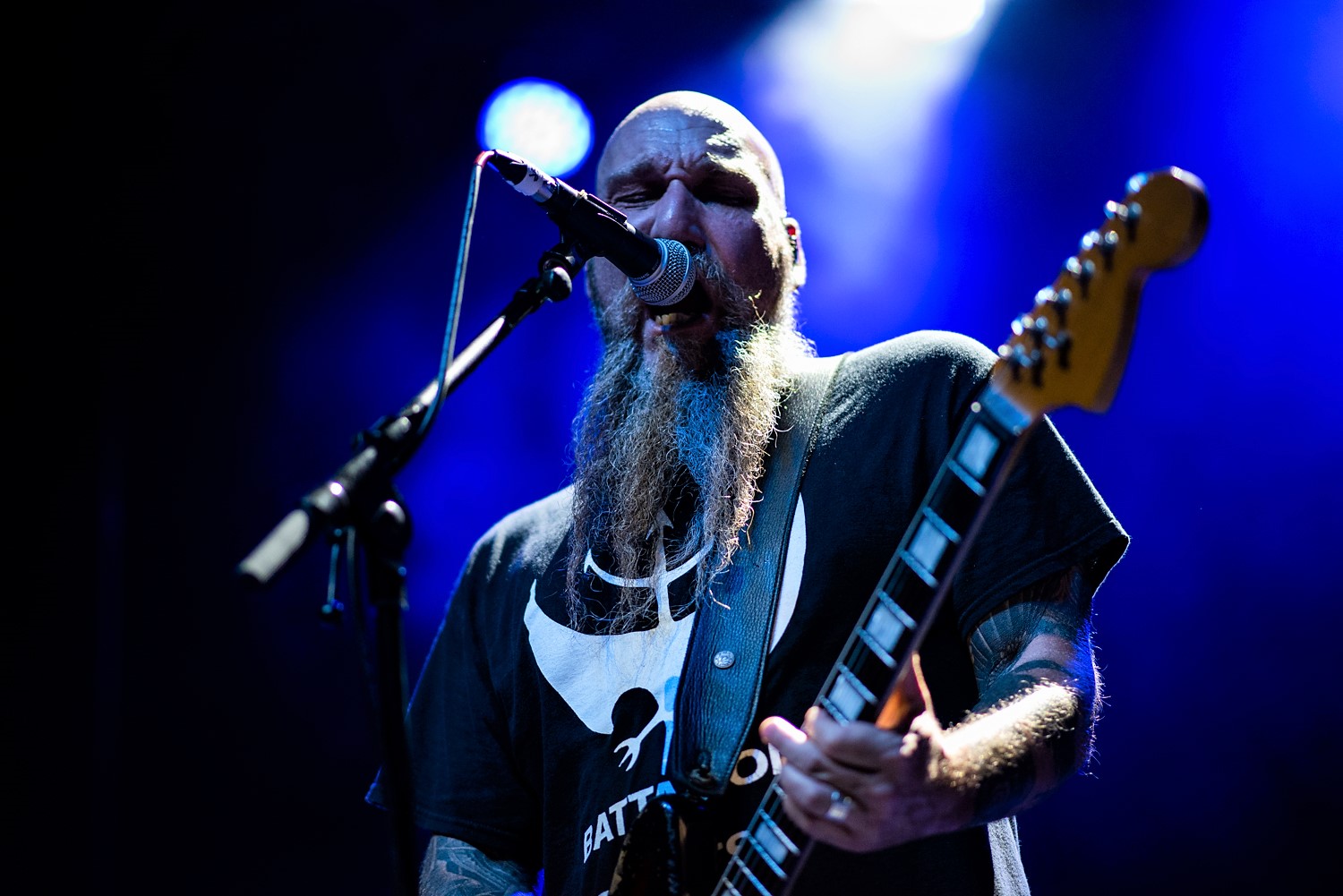 Again, whilst playing ‘At the Well’ short lyrical snippets jump out at me, such as the poetic couplet “Rage will blossom into iron/Blind as a worm in the earth.” I know that Neurosis find inspiration in the novels of Cormac McCarthy, as have many metallers (Dylan Carlson for one), which is pretty clear in this kind of bleak, earthy imagery as well as musically in dirgier moments of low-slung acoustic, with something like a harmonica low in the mix.

It’s clear that these are not songs you can just rattle through, given the complex and emotive post-metal textures that constitutes much of their most recent material. It’s easy to miss the bass player executing nimble, rippling passages pumping away underneath the guitar’s jangly chords and washes of phaser, while keys dude massages the board, rocking out as only someone who’s fixed to the spot can do, leaning right forward toward the crowd. One especially memorable and effective aspect of watching Neurosis live is the way Steve Von Till and Scott Kelly alternate vocals – quite a spectacle even if their voices are not hugely distinct from each other. 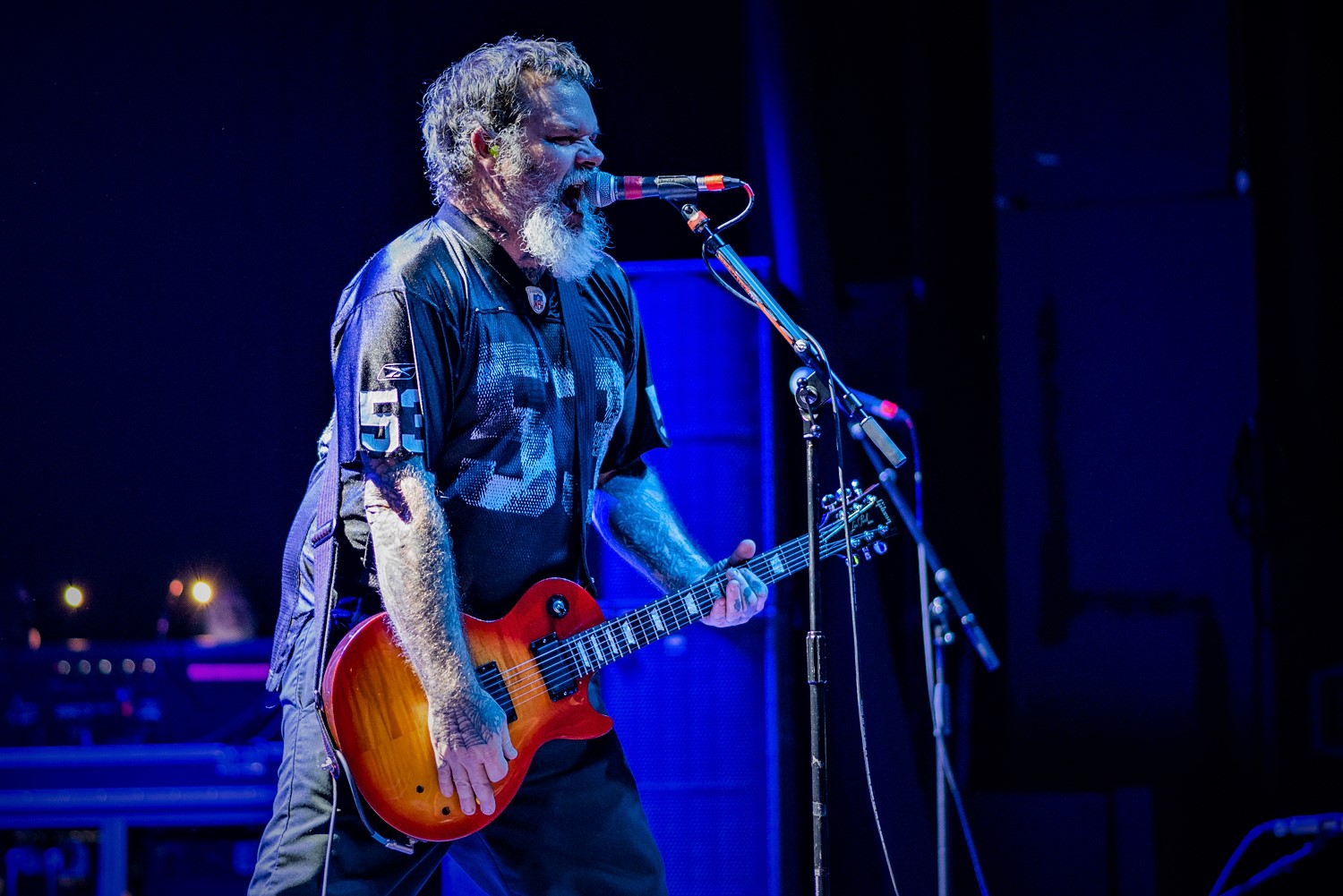 Neurosis’s set covers the most recent fifteen years or so of their 30+ year career, and I don’t think they play any material earlier than say Times of Grace (1999) which is a shame. They’re the kind of band which I think you can only truly appreciate live if you’re very familiar with their material; while it’s still a great show, I’m sure there are others like me who who’d connect with the show better as more than just a casual admirer. ‘End of the Harvest’ from Times of Grace is an especially intense penultimate song, a slow slog of a piece where waves of post-hardcore dissonance wash over a sea of doom heaviness and bizarre low-mixed, demon vocals, drying out briefly as it runs into the sweltering sands of an eerie clean break, all cracked, desert-parched throat and rusty acoustic. Neurosis will always be one of the most genuinely progressive of extreme metal bands, never releasing the same album twice, and endlessly developing their sound.

‘Stones from the Sky’ provides a suitably epic closer, showcasing how Neurosis combine melody and power, musical and emotional heaviness, and a willingness to do things entirely their own way: “You’ve been shown over and over, don’t you know?” 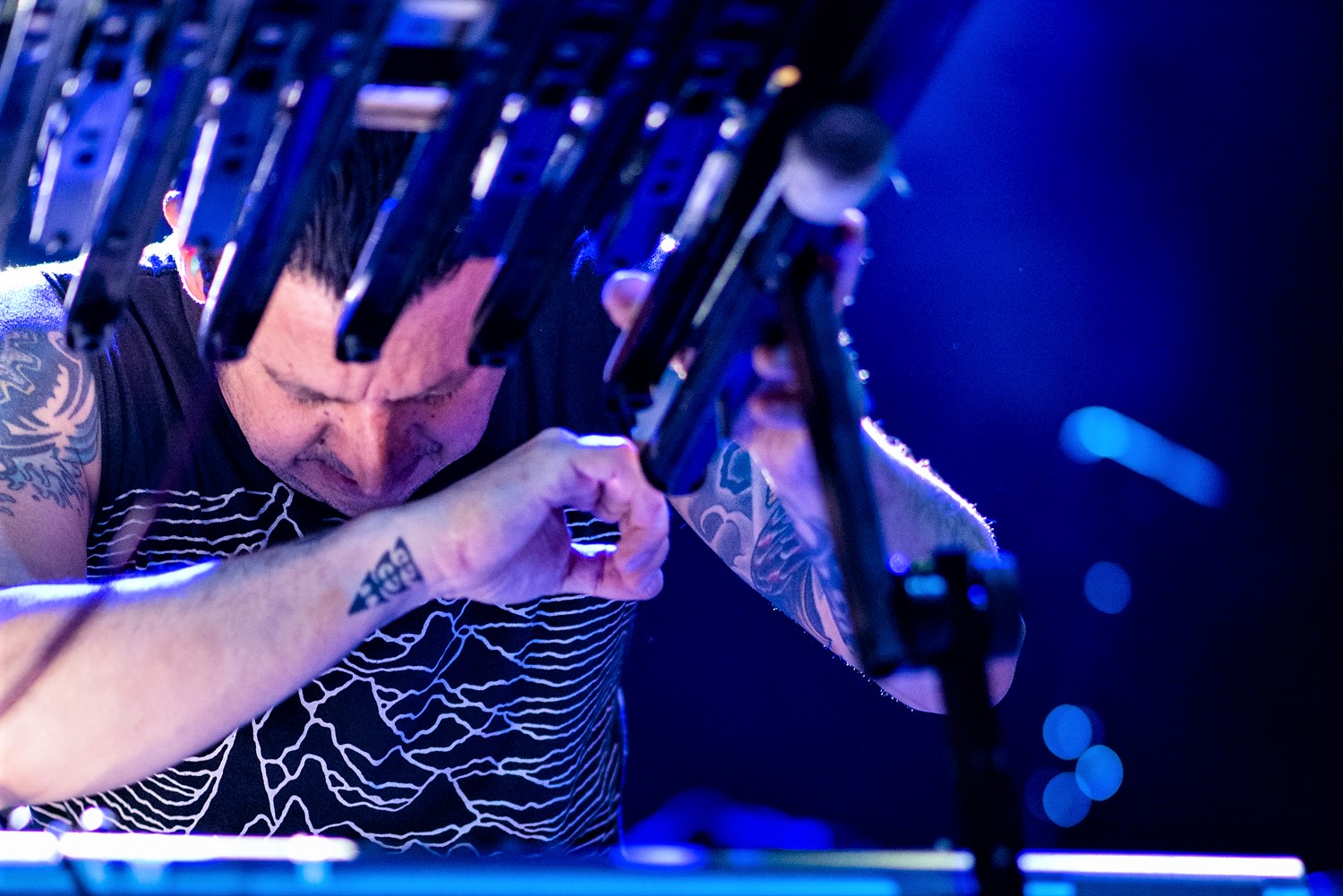