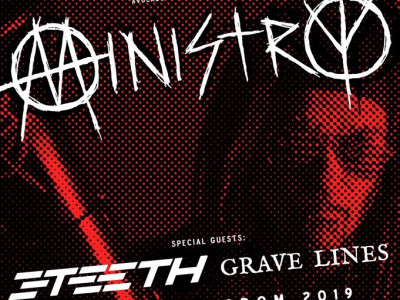 I know of Grave Lines, tonight’s local support, mainly because they’re a hot name around these parts, but also because their guitarist was in the now-sadly-defunct sludge aberration Sea Bastard. Given that I’ve somehow managed to miss seeing them until now, I’m very pleased to catch this blues-infused, doom/sludge feast on what must be one of their biggest gigs to date, supporting the mighty institution that is Ministry.

And Grave Lines sure don’t disappoint. This is grimy, trudging through the murky peat kind of stuff, but laced with the spirit as well as the scale of the blues, something like a nastier version of Goatsnake. There’s a lot more going on, too, genre-wise with neo-folk passages and some smart, intricate riffs somewhere between the complexity of Mastodon at their most progressive and Sleep at their most catchy.

It seems far too early for main-man Jake to explain that they have “one and a half more songs” to go, after maybe two or three songs, but that’s because “they don’t know how to write short songs”. The half song, ‘Guilt/Regret’ which clocks in at under two-minutes, is indeed super-short but is really more of a segue piece. Leading nicely into ‘The Nihilist Engine’ (from the album of almost the same name, Fed Into The Nihilist Engine, their second from 2018) provides a further twelve minutes of miserable doom, downer-dream-scapes and woozy-tuned guitar verses that are pleasantly sickly to absorb.

Every member of Grave Lines distinguishes themselves at some point during this set, with every part contributing without dominating. If we’ve been fed into a nihilist engine, we’ve somehow been digested and output as something cathartically fulfilled.

3TEETH are a different kettle of fish. Or perhaps that should be a different shipping container of lizards. As one of the fastest-rising industrial-metal bands around, LA’s 3TEETH probably need no introduction, especially given that they’ve been regularly smashing London shows for several years now. You’d never know that 3TEETH got pretty bladdered at last night’s release show for their third studio album Metawar, as mainman Alexis Mincolla suggested during our conversation after tonight’s show [link to interview], but you’d certainly know they were pumped up about something. “This place isn’t Electrowerkz, but it’s pretty cool,” quips Alexis, alluding to the launch.  3TEETH may be bursting with energy and ideas on record, but they’re really something else live, with Mincolla’s charisma and flamboyance and a plethora of huge, stomping riffs ensuring that very few people in the venue weren’t glued to this show, support band or not.

If Freddie Mercury was reincarnated as a cyber-assassin with a penchant for BDSM in a dystopian future, he’d probably look quite a lot like Alexis Mincolla. There’s little of Freddie’s clear, quirky melodies in Mincolla’s acid-grimed delivery tonight, however, with verse sections spat out viciously and choruses veering between resplendently nasty and strangely catchy.  Of the five singles 3TEETH released to support Metawar, which went straight to number one in the iTunes chart, ‘Affluenza’ is my favourite, sounding tight and mean tonight. Mincolla punches the air for each massive chord that opens the track; the riff kicks in with a deep, glitchy groove; and the chorus forcefully inserts itself into your memory along with its accompanying dirty synth melody. Glorious.

“Coming up next – you want lizard people?” If you’ve seen the wonderfully bat-shit satirical video for ‘President X’, you’ll know that this can only mean one thing. As with Ministry’s ‘Uncle’ Al Jourgenson, Mincolla is a man who loves a conspiracy theory and it’s difficult to miss the David Ickean imagery of ‘President X’, complete with a fascist, humanoid-lizard President in the video and the line ‘I’m the old flesh in progressive disguise.’ It’s got classic metal anthem written all over it, garnering enough response tonight to ensure it’ll serve them well at festival and arena shows too.

Tonight proves why there’s such a buzz around 3TEETH. With no screens, and minimal smoke and stage-extras, they absolutely smash their way through this support slot – they’ve got the look, they’ve got the songs, but most of all they’re hungry to keep going and growing.

I never saw Ministry back in the ‘80s, so I can’t tell you how this compares to their heyday shows. But tonight – an extravagant, gonzo barrage of angry political sloganeering, tightly-controlled sonic mayhem, and pantomime theatrics – makes the reason for their longevity clear.

I miss the intro music and a song or two when I’m backstage chatting to Alexis, but I walk in just as a montage of surreal 4Chan footage reaches its peak and they slam into some tracks from the recent Amerikkkant. A Ministry show is ambrosia to those in short supply of attention span, with the stage a kinetic blur of lights, psychedelic screens, wild people who may or may not be playing instruments, flags, and bird skull sculptures. And that’s before you consider that Al himself is there too, of course, showing absolutely no signs of slowing down whatsoever at the ripe old age of 60: on the contrary, he’s a one-man entertainment troop of wild gestures, boundless energy, fluid facial expressions and bizarre quips.

The first half sees Ministry crack on through lots of more recent material, including ‘Wargasm’, ‘Antifa’ (complete with anarchist banners unfurled and paraded around the stage), ‘Game Over’ and ‘Amerikkka’. If such tracks aren’t exactly essential home-listening for me, they stand up very well live, with the whole show run to perfection, and the all-important samples synched with razor-sharp accuracy.

Following an early departure from the stage that fools no-one, Al returns to announce “enough of all that political shit. Here’s your doggy treats”, obviously a cue for some crowd-pleasing classic material. ‘Stigmata’ – hated by Al, apparently written in minutes, and a set-closer for goth-parties the world over – still sounds fresh over thirty years since its release, as does ‘Jesus Built My Hotrod’, reprised and souped-up for the stage. Ministry obviously visited Pets at Home recently, feeding us rabid canines our meaty snacks in the form of ‘NWO’ and ‘Thieves’, the latter sounding especially tight and punchy. And you’ve got to love watching William Burroughs’s shotgun art in the background for ‘Just One Fix’, blasting apart reality and image and language and society with verbal buckshot.

It all gets even more surreal in the last few minutes, when Al offers us a choice between Revolting Cocks’ ‘No Devotion’ or an early track from Ministry’s controversial synth-pop origins, ‘Everyday is Halloween’ from 1984. Opting for the latter performed on acoustics – Ministry with acoustics! – we’re pleased to be dished out a true Pedigree Tasty Treat, the track being seldom played, apparently only at Paris and Berlin shows. It’s a good track, Al still pulls off the cleaner vocals, and it’s a great choice for set closer, even if I think they could do a killer heavy and revamped update.

With local legends, rising stars, and genre pioneers all on fine form this evening, Old Empire have pulled out yet another amazing show that’ll stick with us for a long time.