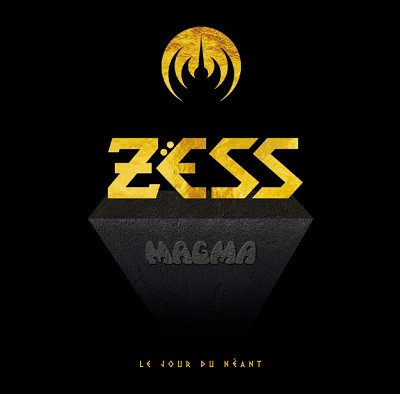 From its haunting piano chords and the Prague Philharmonic Orchestra setting up the tragic details on what is to come, you begin to realize that the adventure itself is just the beginning. For 50 years, Magma has challenged their listeners with the sounds of Classical, Opera, Jazz, and the Avant-Garde rolled into one. Despite the various line-up changes, Magma are still going strong. Whether you like it or not, their music can take you through these uncharted waters.

This year Magma have unleashed Zëss to life on the Seventh Records label. The genesis of the project started 42 years ago during the sessions of their eighth studio album, Attahk at the Château d’Hérouville. The piece was performed in 1979 and became a part of their show until 1983. This year, they’ve decided to bring the story to life again.

From the opening chorus of ‘Ẁöhm dëhm Zeuhl Stadium (Hymne au néant)’ you can imagine yourself being in the heart of the Coliseums in Rome with these epic like scores that is similar to the work of Neil Ardley’s The Time Flowers. And then, Morgan Argen’s drumming comes in to create these canter-like gallop sounds by creating the tension throughout his drum kit while Goubert’s piano follows him to see where he goes as it segues into ‘Da Zeuhl Ẁortz dëhm Ẁrëhntt (Les forces de l’univers – les éléments)’.

Christian Vander talks to the listener as he welcomes them in French as he says, “Greetings, O divine master of the forces of the universe. We are here, we are ready in this ancient stadium. We have come for the last gathering” He’s like a storyteller as he is bringing the story to life as if we’re inside a Kobaian church as he’s giving the sermon from start to finish.

It’s not just the spirit of John Coltrane that is inside Christian’s heart, but there is some bits of ‘60s R&B/Soul in the composition. From speaking to singing arrangements, it goes from that to ‘Dï Ẁööhr Sprašer (La voix qui parle)’ as Vander scats in both French and Kobaia. He can really scat very well as the band members give him free-rein before shrieking for a few seconds and then heading back into the action.

What I love about in the Orchestra’s arrangements on Zëss, is that they tackle the deep, dark alarming beauty between Igor Stravinsky and Ottorino Respighi’s Pines of Rome on ‘Štreüm Ündets Ẁëhëm (Pont de l’en-delá)’. It’s a perfect combination to create this eruptive cannon blast that has just exploded at the right moment before Stella and guitarist Rudy Blas share this melodic scat.

Blas goes through some arpeggiated melodies to follow her vocalizations with ‘Zëss Mahntëhr Kantöhm (Le maître chant)’. It’s very challenging what Rudy does. He channels the guitar structures of Allan Holdsworth, Frank Zappa, and Dave Murray of Iron Maiden. His playing is very much like walking up this spiraling staircase that has no stop sign for him. But he does at times do some of those stop and go moments before Christian comes in to lend both Stella and Rudy a helping hand.

‘Zï Ïss Ẁöss Štëhëm (Vers l’infiniment)’ is Magma’s answer to Swinging Jazz with a twist. But this ain’t the Brian Setzer Orchestra nor Big Bad Voodoo Daddy, this is Kobaian Swing that would have made both Glenn Miller and Benny Goodman very proud to hear something like that has never been done before. And it would have given both Setzer and Big Bad Voodoo Daddy a chance to run for their lives on how Swing should be done perfectly and right on the mark.

‘Dümgëhl Blaö (Glas ultime)’ is a romantic end as we see the sun coming up into the distance as Magma’s answer to the Millennium Falcon returns back home to Earth as a new day approaches while the band and the orchestra close the curtain down. Zëss is going to draw a line in the sand for the fans to whether they want to accept the album or not.

But for me, I have listened to this a few times. And it’s another welcoming return for the band to bring the story to life again for the 21st century. So you might want to buckle up inside Magma’s spacecraft and prepare for another challenging journey into the story of Zëss.