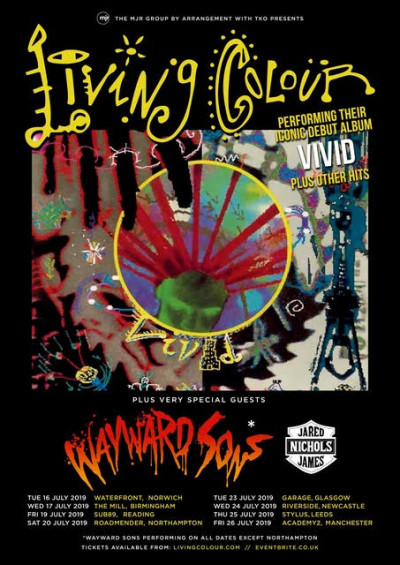 The idea of a band touring, not in support of a new album, but instead to perform a classic work in its entirety, is one which we have all grown quite used to in recent years as bands increasingly rely on touring for their income and require new ways to keep the crowds coming. The extent to which these tours genuinely do garner additional interest is perhaps debatable, but it is clear that when Living Colour decided to get in on the act, announcing that they would be touring the UK to celebrate 30 years since their seminal debut album Vivid, many immediately put this down as a must-see. It is no surprise as to why, because Vivid is not just nostalgic for the Living Colour faithful, but has had untold influence on so many of the funk and hip-hop influenced bands that came after them throughout the nineties and into the noughties. It did feel as though something of this magnitude demanded a bigger venue than Reading’s Sub89, but this was where the fans gathered on a Friday night to sell the place out.

The upstairs venue appeared particularly depressing on a rainy summer evening where the early start time meant that very few people indeed were there to see the first act of the evening, Jared James Nichols. Still relatively new on the classic rock scene, Nichols has quietly been making a name for himself both in his native USA and on British shores too, particularly with the release of his latest single ‘Nails in the Coffin’, which has gotten some good rotation on the British airwaves. Fronting a talented hard-rocking trio, he refused to let the small crowd phase him as he performed his thirty-minute set with admirable enthusiasm, and no small amount of skill. His guitar-playing was particularly impressive, as he devoted a fair amount of time to guitar solos. This could have become tiresome, especially for an opening act, but Nichols was sparing enough for the impact not to be diminished, and his ‘pickless’ style was not only fascinating to watch, but was undoubtedly effective. Those that had turned out early to see him went away glad they had done so.

Next up were Wayward Sons, who are another hard rock act fronted by former Gun and Little Angels singer Toby Jepson. Jepson’s experience at engaging the (now, thankfully, much larger) crowd is evident, especially in comparison to the still somewhat fresh-faced Nichols. Wayward Sons don’t bring anything especially new to the table, as the classic riffs and hooks are all things that have been heard before, but they certainly perform them well and do a great deal to get the audience’s blood pumping. They also do a very good job of balancing the melodic side of their sound with their heavy riffs and beats, which is certainly to be commended as a support act. The fact that their sound does not offer a great deal to interest casual onlookers is a problem however, particularly supporting a band who are so well-known for their innovation. Both classic rock supports certainly did what they do incredibly well, but what they did was clearly not of appeal to everyone there.

By the time Living Colour came onstage, it felt incredible that the same venue which seemed so empty a mere two hours before was now completely full and with a tangible sense of anticipation in the air. The band enter the stage living up to their name, donning various brightly coloured suits (with the exception of guitarist and band founder Vernon Reid, who wears plain black) and kick things off with a surprise opener ‘Ignorance is Bliss’ from their 1993 album Stain. After this, frontman Corey Glover toys with the crowd a little before the band finally jump into the iconic riff of Vivid’s opener ‘Cult of Personality’, which is definitely the band’s most enduring hit. To see this classic song performed live in a way that does not just pander to the nostalgia of the older fans, but also retains the song’s relevance in the modern era was very special indeed, and set the high standard of performance which they would continue for the rest of the show. Living Colour were every bit as exciting, fresh-sounding and entertaining as they were when Vivid was released in 1988. What’s more, they are able to get the tone for each song exactly right as they moved seamlessly between genres and influences. From the intensity of ‘Cult of Personality’ to the pop-driven ‘I Want To Know’ to the soulful ‘Open Letter (To a Landlord)’, every song is delivered with the exact right balance that brings it out to its fullest.

Although an outsider may look upon a band like Living Colour as a bit of a novelty act, the reality of seeing them at a live show proves this to be false. The talent of each of the four members is evident throughout; with drummer Will Calhoun making full use of his extensive kit, bassist Doug Wimbish showing off a range of impressive techniques, and lead singer Corey Glover showing that thirty years on he’s still fully capable of hitting all the right notes. The most impressive performance of the evening though goes to guitarist Vernon Reid, who spent the night shredding his way through solo after solo to incredible effect. Any aspiring guitarist would have looked upon this half in admiration, half in irritation, because Reid made everything he did look so supremely effortless he almost made a mockery of other guitar players.

In addition to the musicianship, the band, with their no-frills performance of such an adored album, use the small space of Reading’s Sub89 to foster a real connection with their audience; which especially came out in the crowd favourites like ‘Funny Vibe’ and ‘What’s Your Favourite Colour’. Even when Vivid was completed, the band continued playing, with Glover playfully telling the audience that the band were not done just yet and move on to three songs from the follow-up to Vivid, 1990’s Time’s Up. ‘Love Rears Its Ugly Head’ stood out as a real classic, but particular fun was had with the band mashing up the title track with a cover of James Brown’s ‘Get Up’. Sadly though, with just one more song ‘Type’, they did finally depart with every member of the audience still pleading in vain for more. Living Colour provided more than a simple exercise in nostalgia, but a true masterclass of how to put on an intimate live performance that demonstrates they are still one of the best in the business.