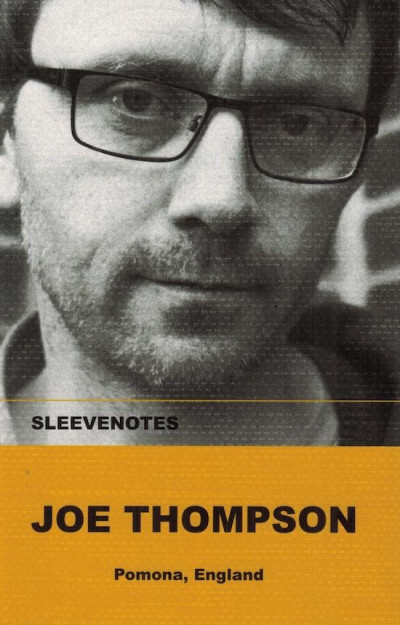 Being a musician…you start a band, play some gigs, get a deal, release an album, and world wide fame beckons. Screaming hordes fill your gigs and you finally reach that pinnacle of stardom…the ability to charge £80 a ticket, just like Radiohead.

Except the reality is somewhat different, and anyone who doubts would do well to read Joe Thompson‘s Sleevenotes, which not only lifts the lid on the realities of being a musician, but also perhaps, provides some meaningful context as to why you want to be in a band in the first place. Not convinced that the be all and end all isn’t that £80 ticket? Then read along…

For the uninitiated amongst you, Joe Thompson is one of the founding members, and erstwhile bass player of Hey Colossus. You may have heard the name, you may not…the fact is, they have been burning a continuous trail of albums, EPs and singles for over 15 years now. Plenty of time to build that rapport with an audience, make some deals and achieve that…well, you know…remember Radiohead.

Except for Hey Colossus its a different tale, and it’s not a singular one either, but, as Joe puts it, one of the “other music industry”, the one that is kept alive by fans, bands and people in bedrooms willing to stump up the money to fund said bands releases. It may be labelled as a scene, but as we learn throughout this book, whilst it may be simple to denigrate DIY as a scene, the truth is larger than fiction. DIY has become a way of life for many in the music industry. Almost like a shadow of its bigger brother, only this time instead of filling the arenas and stadiums these bands thrive on playing to 21 people on a Sunday night in Gijon, and that’s on a good night.

You can question why bands such as Hey Colossus carry one doing what they are doing. Fulfilling band duties on top of holding down full time jobs, and raising families, it almost seems so futile, but to believe that is to show your idea of what being in a band is all about. The eternal optimism at the heart of Joe’s story is the driver that keeps you involved, and in turn keeps the bands going. It becomes an inclusive affair, playing places, returning to play to a few more who have heard about the first show, relying on word of mouth, and that’s before you get to releasing records.

To travail the Hey Colossus back catalogue would take some feat of ingenuity (and a certain madness) these days. Even Joe admits that he doesn’t know the full extent of what they have released, and he lived it. What does come apparent though, is the symbiotic relationship between the band, and the record label that believes. Joe introduces us to the believers of the HC cause, and with a roll call of underground luminaries such as Rocket Recordings and Riot Season amongst others, you get some idea of the nature of the DIY scene and how it all ties together. Knowing this kind of makes you understand why you would travel all those miles to some far off European city to play to 21 people. At least you may sell a record or two.

This book will tell you one side of the Hey Colossus story, but really it’s not just about HC but about music in general too. Joe is a lively narrator, and casts a world wearied view over the music industry in general. What does come across more than anything though, is the passion that this forty something still feels for music, be it the arcane meanings of heavy metal, or the minute differences in rap. That passion digs into the band too, and from deep within their DIY underground scene they have scorched a releases which have never stayed in one place for too long. Hell, you can have your favourite song, but find its morphed into something else a few gigs down the line. It’s the mark of progress, experimentation, and a restless urge to reinvent. It’s everything you should want from music, you may not hear it because the “other music industry” won’t let you hear it.

This book is great as a primer but to truly understand the DIY music scene you will need to go looking yourself. Let Joe Thompson guide you in your first forays and you wont go far wrong. An exceptional and eye-opening book on the realities of making music in this day and age.