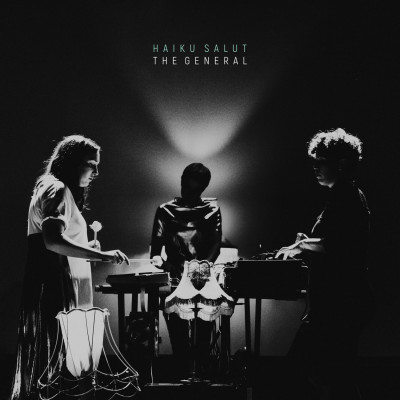 The General by Haiku Salut

Up in their studio at the edge of the Peak District Haiku Salut make evocative, shimmering, instrumental music. The sort of thing that rarely ventures far in the world before bumping into the word soundtrack by way of description. You know how it goes. The General is their newly devised soundtrack for Buster Keaton’s 1926 silent comedy, commissioned by Nottingham Contemporary as part of the BFI’s Comedy Genius season. This is a thrilling and bold choice because while their music is certainly cinematic it also feels bright and modern. Not an obvious companion to some flickering black and white slapstick closing in on a century old.

For the record here, The General is an absolute masterpiece. I cannot recommend it to you enough. If you’ve never seen the point in watching old silent movies, or sat bored rigid through them because a friend somehow convinced you of Chaplin’s genius, I feel you. But Buster is the best and even now The General is an astonishing film. Hugely expensive and ambitious in its day it died at the box office and ruined Keaton’s career for a number of years. The man himself always considered it to be his best work and time has brought near universal agreement to that sentiment. Out of copyright since 1954 it’s easy to find the whole thing on youtube. There is no excuse for not taking the time to watch it, or maybe watch it again if it’s been a while. You’ll have to mute whatever’s already been dubbed on it on, try and cue it up with this album…

Still, for the purposes of home listening the success or otherwise of the music as a soundtrack hardly matters. We’ll mostly be enjoying it as a stand alone album of elegant piano, fluid electronica and understated post rock moods. It’s strong and distant enough from the movie to do this but is nevertheless clearly shaped by it. In comparison with last year’s stunning There Is No Elsewhere it works as a set of delicate miniatures, many of the 23 tracks are only brief sketches. Writing this music to be performed as a live accompaniment to the film forced a reduction in the band’s usual arsenal of instruments but little noticeable reduction in scope. They do not score directly to the catalogue of increasingly chaotic incidents on screen nor establish a theme to push in different directions. Instead they attempt to capture an honest emotional response to each scene, to quietly emphasise the underlying mood.

The double A side released ahead of the album contrasts sounds and moods from either end of the film. ‘Loves’ is a waltz time swoon for Keaton’s Johnny and his love of Annabelle, the romance that forms the heart of the film amidst the considerable madness to come. On the other side the busy bleeps and soft sighs of ‘Going Back’ follow the twists of yet another unusual chase scene in a film that is essentially one long chase from beginning to end.

Spending some time with the film and music together is to be strongly encouraged, it brings out surprising resonances and underscores why Haiku Salut were such a great choice for this project. Perfectly, they arranged ‘Traction’ for a moment where Buster blinks. For all the remarkable stunts (the climactic bridge collapse was the single most expensive shot of the silent era) it’s Keaton’s stoic ‘Great Stone Face’ that glows on screen in almost every scene and carries us along on Johnny’s adventure. There’s plenty of visual gags and funny moments in The General but Keaton never mugs or clowns in the way his contemporaries did. Haiku Salut’s music teases out Johnny’s melancholy and his persistence. They succeed by finding the film’s emotional heart and leaning into its eternal theme of a simple man looking for love and fighting against an insane world that does everything to thwart him. Their unlikely acheivement is as brave and heartwarming as Johnny’s.