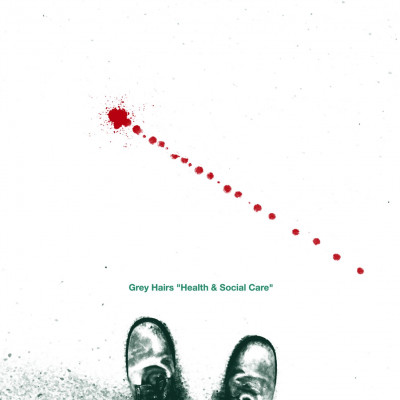 Nottingham’s premier punk rock self help group get darker on their brilliant third album Health & Social Care. Over their first couple of records Grey Hairs have established themselves as among the country’s finest garage/noise/punk outfits by doggedly digging their own hole. Health & Social Care is not quite as friendly and immediate as Serious Business was, it’s heavier, more ill tempered, but it doesn’t take long to get its hooks in you. Taking on the disappointments of age suggested by their name it finds them weighted with real adult concerns and gnawing anxiety about the brokenness of the world.

The static, guitar whine and chug that open ‘Hydropona’ feels like a rollercoaster cranking up to the first drop, James’ nerves sound more than usually shot. Likewise ‘Piss Transgressor’ is taut in the verses and careens exhilaratingly away on the chorus. What he’s yelling about I can’t tell and I’m not certain I want to know. Even when you can make out the lyrics it’s hard to pull a clear reading from them but he has a great knack for twisting, looping phrases that work rhythmically and worm into your brain. It’s in full effect on the bass rumble and guitar clang of ‘Ghost In Your Own Life’ and secret pop banger ‘Tail To Teeth’, wherein they even make time for some handclaps. Always the right choice.

The album’s title references the day jobs of band members, toiling at the coal face of human misery in a deliberately vandalised public sector. A political record not of slogans but eyewitness horror and helpless disgust. The usual daily dismay. It might be hard to follow the words but there’s no missing the intent. As Grandma used to say “It takes a worried man to sing a worried song”. The anger in this record is not the formless rage of youth but the exhausted teeth grind fury that comes from experience. Their confusion and despair are most pointedly underlined by evoking the absurd figure of the ‘Tory Nurse’. Some kind of contradictory folk demon, we probably have to accept that out there, somewhere, they exist. The song has a low key but implacable menace about it which is heightened by a surreal video in which the band bury a clown in the woods.

The surprising vocal opening of ‘Breathing In, Breathing Out’ is almost falsetto and finds us standing in the ocean, watching cars floating in the tide. It’s strikingly evocative and as the band comes in it sounds like wading out into the choppy seas. What they do so well is keep a balance between being smart and inventive on the one hand but dysfunctional and bruising on the other. The fierce sodden lurch of their sound has some fractured song structures under its coat and a pocketful of pop impulse that scatters catchy choruses and riffs in unexpected corners.

Grey Hairs have always drawn vague comparisons to 90’s US bands, Nirvana, Tad, The Jesus Lizard and so on. I love all that stuff, the band generally put their hands up to it and when it’s pointed out it’s hard to deny. The thing is though, I’ve never got that just from listening to their music, they have an individual enough take on the basic elements of what they do to step out from the shadows of their influences. With not a bad track on it Health & Social Care is a cracking album from one of the UK’s best current bands, I recommend buying a copy and not missing them if they play anywhere near you.