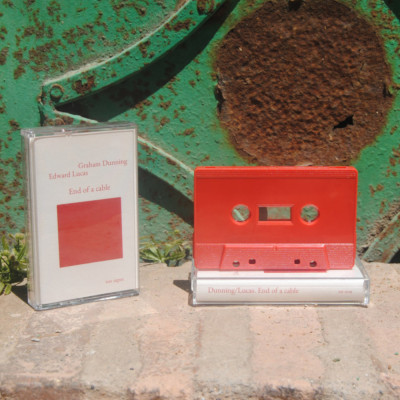 End of a Cable by Graham Dunning & Edward Lucas

What happens when you team up a London-based improvisational trombone player with an experimental musician best known for their mechanical techno sets? This might sound like the set up to an elaborate joke wherein the punchline only means something to people wearing turtlenecks but, in fact, it is the question posed by Spanish tape label TSSS when they agreed to put out a cassette of the pair’s efforts a short while back.

The aforementioned mechanical techno project, which was put together almost on a whim, is by one Graham Dunning and has since proven almost overwhelmingly popular. If you haven’t seen what he can do with a turntable, a couple of retort stands, and a bucket of ping-pong balls, then I strongly recommend amending that. The other half of this duo – Edward Lucas (the large trumpet wielder) – has been at the heart of the London improvisational scene for quite some time. He plays with a number of collectives including the Hyperion Ensemble and the London Experimental Ensemble, and he is also co-founder of the Earshots Recordings label.

Neither of these two artists are exactly famed for their conventional approaches so it doesn’t really come as a surprise to discover that End of a Cable is a disconcerting, discombobulating hot pot of sonic explorations. Sounds simper and boom, they ruffle the air and sidle in. One moment we are amidst loops of squealing crickets and the next, static blasts and brass warbles. If it’s structure that you’re after, you’d best point your ears elsewhere.

Ironically, the track ‘Disorderly’ steers closest to expected musical blueprints. It rises into a bursting cacophony before gently dying away only to flare up once again with sheets of grain seemingly patted, rattled, and bothered whilst a whistling drone descends opposite the opining trombone. Then on ‘Silt’ we get gates clanking, shrieking metal, and crackling embers. Every so often the turntable stops, making the record scratch as if revealing an unexpected plot twist in a dubious trailer for a Hollywood comedy. This then expands into a bristling and stormy blister that drowns out any remaining nuance.

What this pair do succeed in doing is delicately inverting expectations and understanding through curling layers of textures and drones. ‘Intönal Causeway’ is squeezed out like the breath of a snuffly cat. We have the most melodic moment on the record as tight cheese wire strings are plucked and the asthmatic feline struggles for life through jangles and a hopeful mini harp. It’s the sound of dredging the land beneath a village on an icy outcrop until all traces of their existence tumbles into murky depths.

With experimental, improvised music there is a tendency for its listeners to attempt to intellectualise these creations. To find through roads linking madness to method, as if some justification were needed. The reality of it is that these pieces are as enjoyable on guttural and visceral levels as they are on cerebral. Let the sounds transport you to medieval villages, where scraping, hammering, and clunking were part of the daily soundscape. Add to that methane-heavy brass outbursts and you’re surrounded by milk-lugging wildlife. Throw in some throaty bass loops and the sky darkens forebodingly. It turns out that what you get when you combine these two musical pioneers is something stark, enveloping, and begging for investigation.