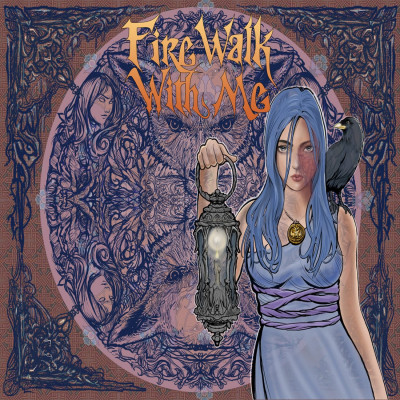 The Eternal Black Rainbow by FireWalkWithMe

FireWalkWithMe are from Austin, Texas and feature one of that city’s finest sons, Mr Jason Reece, on drums. Their debut album The Eternal Black Rainbow may be brief, but that does not diminish in any way, shape or form, the majesty of the music contained therein. Completing the quartet are Austin music scene veterans Ricardo Mendez (guitars/vocals), Jason Westbrook (bass) and Christian Kyle (guitars/backing vocals). I feel obliged to mention their other bands who are not known to me, but soon will be, High Watt Crucifixers and Schatzi. Incidentally, this entire operation is controlled in-house by Ricardo, which adds to the intrigue.

Declaring FireWalkWithMe as “no ordinary band, but rather a group of musicians reborn with a passion to create truly earth-shaking rock music”, the press release states the truth. Recorded by engineer Charles Godfrey (Yeah Yeah Yeahs, Swans and Beach House), the album rips into life with the snarling, sinister guitars and tension raising drums of ‘This Is How It Ends Intro’. Quite simply, there is no getting away from the similarities with Austin’s best known rock band, …And You Will Know Us by the Trail of Dead. When Mendez spits out the fearsome melody it could truly be something lifted from the Texan titan’s illustrious back catalogue. So if you liked their brand of vitriolic confrontational rock then FireWalkWithMe are going to light your fires and then some.

During ‘A Tired God Looks On’, epic punk tendencies are met head on with striking pianos that add an additional uplifting element to absorb. The song staggers into a stormy and tempestuous sonic blur of violently battered guitars while Jason hammers the shite out of his kit like Thor on steroids. Melody rides high throughout this album and ‘Before I Disappear’ combines perfect pop with a spiky punk edge. ‘Song About Death’ is a ruthless salvo of punk missiles featuring some of those killer twisting guitar lines that Trail of Dead specialise in. Having said that, the song is imbued with a real sense of identity that this is an entirely different band, which of course, it is.

With the blueprint of kicking drums and screaming guitars in full flow, the heaviest track on offer, ‘Ships of Antikythera’ finds Mendez losing his shit and howling indecipherably. ‘Still Life In Photography’ is a beautiful (punk rock) song with soaring vocals and sumptuous guitar lines that are bursting with hooks. The song features rare moments of calm and bluesy exploration as Jason chills and the tempo drops off. ‘My Roots Deep Within The Earth’ contains one of those boomerang riffs that shoots out and returns to where it started (Trail of Dead rip them out all the time with consummate ease). The song drips sweat from every note and the amount of electrifying energy it invokes would be enough to power a city.

Lone ballad ‘Swallowed By The Sea’ features a heartfelt vocal from Mendez while the guitars soar to sky scraping heights and the song shows there is more to FireWalkWithMe than manic bluster. When the song eventually veers into heavier territories they still retain a regal beauty. Closer ‘This Is How It Ends Outro’ perversely begins like an opening track would. With an album spanning an economic 9 songs, to have what is effectively two versions of the same song might seem cheating. However, the song in question is rather splendid and after the kicking you receive from tracks 2-8 has subdued, it’s good to be reminded where you were 39 minutes ago.

I mentioned above that the press release stated the truth, there is however one sizeable sidestep from that path. To say that the band are “an amalgamation that sounds quite unlike anything else around it” is to essentially deny that Reece’s involvement was purely beat orientated. Either the legacy that Trail of Dead have scattered over Austin is so consuming that no-one notices the influence or else my tinnitus is worse than I thought! Which is not to try and do FireWalkWithMe any sort of dis-service as this is an album that stands on it’s own merits. I’ve been listening to it for what feels like years, I received the promo so long ago, yet it still feels fresh and exciting. I highly recommend you check out The Eternal Black Rainbow and absolutely hope that there’ll be more to come from FireWalkWithMe.