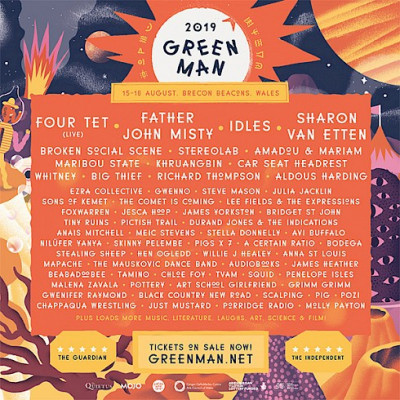 “There’s a welsh word – Hiraeth – which roughly translates as ‘the longing to be somewhere’. It captures my feelings about Green Man perfectly.”
These are the words of Rosie Williams – a loyal, long-time attendee and one of the people I spoke to ahead of this year’s festival. I wanted to get a sense of what makes Green Man so special to those who go every year, and also so appealing to those who have not yet been.

“I’m excited about going to a new festival,” explains Maria Barnard. “Mostly for the music, of course. I often listen to BBC 6 Music so it will be great to see artists that are on their playlists. But I am also especially excited about Babbling Tongues and hearing people in conversation, like Caitlin Moran and Jarvis Cocker.”
The Green Man organizers have a knack for selecting a superb line-up year after year, and 2019 is no exception. Early arrivals on Thursday will be treated to the shimmering Bess Atwell at the Walled Garden, the rich funk grooves of Afro Cluster at Chai Wallahs, and the electro-pop genius of Amadou & Mariam at Far Out.

Friday plays hosts to an abundance of brilliant acts. The heart-wrenchingly gorgeous Whitney will take to the main stage just after the mighty Julia Jacklin (Crushing is among my top releases of 2019). A highlight will surely be Ex:Re headlining the Walled Garden. A secret treasure can be found at the Cinedrome – ‘I Am Easy To Find’ is The National’s new short film.

The Mountain Stage line-up on Saturday is out of this world. Every single song that Stella Donnelly has ever released is beautiful. Some are terrifyingly sobering, exploring themes of sexual abuse and rape. Others are upbeat and bouncy. All are brilliant. Donnelly is my Echoes and Dust MUST-SEE act of Green Man 2019.

Big Thief will deliver another huge set on the Mountain Stage (U.F.O.F is my top release of 2019 so far), with Four Tet topping off the night. One of our favourites of Green Man 2017, The Big Moon, will blow the top of Far Out, and Art School Girlfriend is a hot tip at the Walled Garden stage.

A tiresome Sunday will get infinitely better with Sharon Van Etten at the Mountain Stage. Watching her explosive set at Glastonbury provided more spine-tingling moments than any other act. Say Sue Me are also likely to inject some energy with their punchy indie tracks at Far Out, while Chloe Foy can provide a warm and relaxing vibe to kickback.

Father John Misty and Whitney are the two acts that Rosie is most looking forward to seeing. “But some of the best Green Man moments are the ones you stumble across or weren’t expecting to enjoy as much as you did.”

It’s not just the music, comedians and films that bring people to Green Man. “One of the big things for me is getting to see the surroundings,” Maria continues. “I’ve no real knowledge of the area, but I’ve been told that the Brecon Beacons are beautiful.” They absolutely are, so go ahead and take the Monday after the festival off work to explore.

Asked what they would say if they had one request for the festival organizers, Maria simply states: “Keep it affordable. The weekend tickets are well priced.” Rosie adds: “Literally don’t change what makes Green Man great. Keep it independent, keep the great music and the great Welsh beer flowing (and continue to save us from middle of the road mediocrity).”