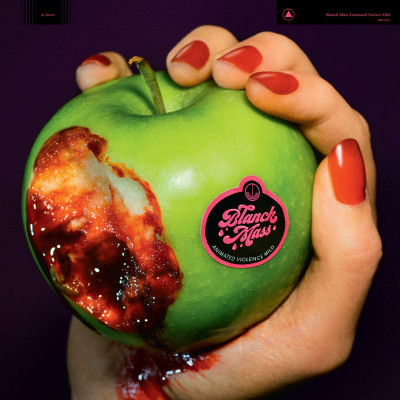 It starts with mangled pocket dial chatter. A rising electronic wave punches into ‘Death Drop’ and we’re racing under streetlights and neon on a dense current of sound. Full on from the go, there’s a burnt but stirring synth line in there urging us on. Then the formless screaming starts, the filtered static chant of robot skeletons. It’s an intense opener but this kind of maxed out, teeming momentum is what we’ve come to expect from Blanck Mass. On his fourth album Animated Violence Mild he continues his unique balancing act of synth-pop melody and pummelling noise.

From the bleeding bitten apple on the cover and accompanying statement “We have manifested a serpent of consumerism which now coils back upon us… We throw ourselves out of our own garden. We poison ourselves to the edges of an endless sleep.” it’s apparent this is, in some ways, even angrier than 2017’s World Eater. If titles like ‘Wings Of Hate’ and ‘Love Is A Parasite’ look like they’d be at home on a Prurient album it’s still some way from that kind of abrasive assault. Beyond the initial adrenaline jolt screaming fit of ‘Death Drop’ it softens slightly and broadens out.

The overlaid twitching rhythms that open ‘House vs. House’ are swept under by a lovely epic synth line leading us to swaying vocals buried in hectic beats before returning gloriously at the end. It’s worth remembering that a track from the debut Blanck Mass album was performed at the 2012 opening ceremony. As dense and intense as it can get there remains an unfailing ear for a stirring, stadium sized melody, something pumping the blood in the midst of the busy machine sound. ‘Hush Money’ has a bright 80’s pop melody worthy of Vince Clarke, unfurling like a flag above the chaotic roar of the crowd. ‘No Dice’ even has something of the feel of a Depeche Mode remix about it. It’s a curious track, like having a hundred youtube clips of the eighties open at once. It has a side stepping, hand clapping beat and a kind of football chant vibe floating in a nauseous ocean of overloaded synth.

The latest track to be lifted from the album ‘Love is a Parasite’ restates its bitter fury, offering little respite from its massive fractured blasts of noise but contrasts sharply with ‘Creature / West Fuqua’ where sparkling widescreen drones sink behind delicate harp and mournful vocal loops. It’s the record’s most unexpected turn but effective for it. Finally ‘Wings of Hate’ revisits the general theme of an intense wall of sound sweetened with melody. It has the familiar Blanck Mass soaring propulsion that suggests wings and footage shot from planes of the landscape rushing past below, however, it doesn’t seem much concerned with hate that I can tell.

Animated Violence Mild is well named then, it pushes a little at the edges of his sound both stretching and refining it. It’s great for motorway driving, possibly good for exercising, I wouldn’t know. Sound tracking Goal Of The Month and/or epic sci-fi seem to loom with a draining inevitability on the horizon but I think we’ll get some even better stuff out of him before then.