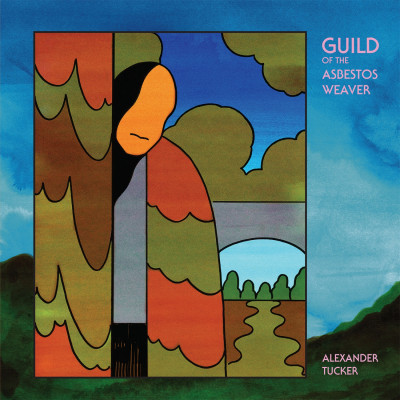 Guild of the Asbestos Weaver by Alexander Tucker

Alexander Tucker is one of our more intriguing and unclassifiable artists, blending ever more elements into his increasingly singular sound. Perhaps slightly better known as one half of avant psych pop duo Grumbling Fur, Guild of the Asbestos Weaver his eighth solo album and like 2018’s sublime Don’t Look Away it features an ugly, somewhat off-putting cover. Don’t be fooled by the external, or rather, come on in and allow yourself to be willingly confounded by his mercurial enchantments. The five songs here have a gleaming pop surface that somehow shimmers above deep psychedelic drone alchemy. It’s dream music, full of mystery and possibility.

Sidling into life on what sounds like a broken bossa nova setting and afterimage trails of sound ‘Energy Alphas’ kicks up and is carried on a hazy ‘Warm Jets’ drone, twisting and turning, surefooted along pathways it knows but you can only guess. The lyrics are unclear but seem to spin a fantastic tale of terror and/or adventure. Where are we going? It cuts off abruptly into the busy, dramatic opening strings of ‘Artificial Origin’. A steady rhythm of processed cello and layers of dense sound with sweet, leisurely, vocal lines at odds with a building sense of dread. It slows to a buried breakbeat and the hypnotic repeating line “sewing the seeds of time, in straight lines, but your only singing lullabies” as a storm of drones swirl about.

The title Guild of the Asbestos Weaver comes from Fahrenheit 451, Ray Bradbury’s dystopian, book burning sci-fi and nods to the underground opposition to the novel’s totalitarian government. Odd and disquieting to feel that what until recently seemed a charmingly outdated vision of tyranny is regaining its currency. Tucker’s stance is not expressly political, rather seeing opposition in imagination. He invokes the ‘dreamweapon’ idea that dreams and alternate forms of perception are an individual defence against societal norms and thought control. The songs are fractured tales of imagined worlds, rooted in his love of sci-fi and cosmic horror but open to listener interpretation or confusion. One of the more resonant, repeating lines in ‘Precog’ runs “took the time to look in myriad ways, digging holes in the shores of Ireland“. What that means I couldn’t tell you, but it’s hardly the point.

His extraordinary skill at combining acoustic and electronic sources into loose but organic structures is one thing but Tucker’s voice is the magic ingredient above all others, its flow so sweetly charming that the content seems secondary, washing over you in a bubbling stream of vowel sounds. A wonderful and contradictory instrument, it is somehow both emotional and affectless, open and arcane, devotional yet ordinary. Bright and appealing it makes his dense abstracted drone into approachable pop. Guild of the Asbestos Weaver is a deeply weird and yet wonderfully accessible record.