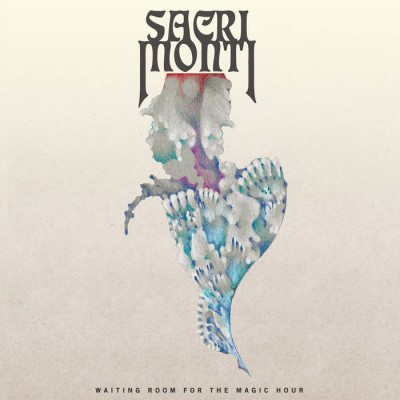 Waiting Room for the Magic Hour by Sacri Monti

It has been a four-year wait for California’s psychedelic heavy rock merchants Sacri Monti to follow up their 2015 self-titled debut album. There was a split E.P. with Harsh Toke in 2017 but otherwise, all rather quiet on the recorded output front. Appropriately titled, Waiting Room for the Magic Hour is the sound of a band who have been jamming in their garage continuously since. From the kick-off, this is a band burying themselves even deeper into the rock pioneers of Sir Lord Baltimore, Blue Oyster Cult, Atomic Rooster, and classic early Deep Purple and more recently, Comets on Fire’s swirling psych rock. So, expect wild free-firing guitar solos, swinging tempo changes, mind-melting jams, as well as riffy melodic hooks.

Their debut self-titled album was a head-on drive of a ride, both loud and buzzing with energy, it ramped up the wah wah, flange, and fuzz pedal effects for an impressive entrance. A bombardment of relentless ocean sized stormy waves of textured organ and guitar soloing shoot-outs, but at the same time had the surprising ability to immerse itself tightly around you for a memorable listening experience.

For their second record, Sacri Monti already assume you are already right there in the eye of their stirring musical storm. While it is no crime to obliterate conventional song structures, if not careful it can lead to it being rather overwhelming, tricky to engage with, and even succumb into self-indulgence. Unfortunately, this is the case for the opening title track. The second track ‘Fear And Fire,’ and a bit later ‘Starlight’ also follow a similar path as they continue this relentless flurry of numerous amounts of changes in tempo, leading you down a multitude of different tunnels.

Fortunately, there are tracks which are less intensely compiled and provide opportunities for allowing the listener to step into the fray. ‘Armistice’ has a repetitive lysergic trance hook to pull you in. While the much-needed lighter mid-way section offers a respite before it returns to the opening refrain for a heavier, but equally absorbing finish. This is the Sacri Monti I was hoping for.

Unexpectedly, this time around it is the lighter, less hectic, keep it simpler songs which provide the album’s highlights. ‘Affirmation’ swoons in a graceful early 70’s smoke-filled haze with some beautiful guitar playing. The closing acoustic led, folkie melody of ‘You Beautiful Demon’ successfully creates a chilled, space for dreaming, atmosphere.

The afore-mentioned debut is an immediate belter in comparison. As the Waiting Room for the Magic Hour’s enjoyment will depend on how easily you can get into the band’s ebbs and flows. All the playing is immaculate, but the constant shifting of tempos within a song brings in greater progressive rock elements, which at times instills over-complication to proceedings.

The main consequence is it fails to completely engage and connect. While there are wonderful melodies and hooks scattered throughout the record, this juxtaposes with the all-consuming free-form improvisation going on all around it. This may be great to play and wonderful as a creative outlet for the band, but the key problem is it just isn’t memorable enough, forgotten once the last note is played. I admire its expansive attempt, as it would have been an easier option to steer the vessel in similar waters as before, but ultimately, it is less satisfying. Maybe these tracks will come alive in a live context, but The Waiting Room for the Magic Hour is a tad disappointing second album by a band who have a lot more to offer.