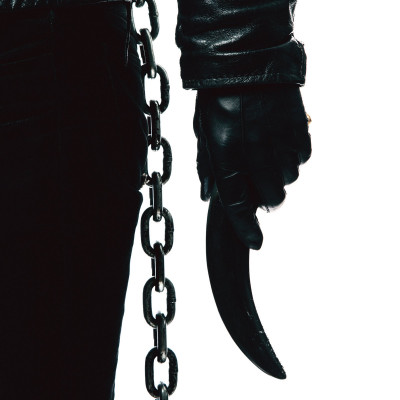 There’s always fun to be had from a first listen of something that one has no ideas or expectations. Sometimes launching out of a comfort zone into the unknown is the best way of punching one’s way out of a funk, and a good way of piquing interest is putting something upfront before even a single note is heard that makes sure that you’re paying attention. And there’s certainly a lot to unpack from NYC’s Nastie Band before it all starts spinning: a sinister cover, a tracklisting which suggests all manner of goings-on, the inclusion of Faith No More’s Roddy Bottum who can always be relied upon to provide moments of beauty in darkness (and vice versa), and the suggestion that this is all a piece of conceptual art, the brainchild of artist Frank Haines’ alter-ego Sandy Smiles. This is what first impressions should be; striking, thought-provoking, and at least partially misleading.

The opening track immediately made me realise that however strange I had imagined this self-titled debut to be, I was nowhere near prepared for how odd it actually is or indeed how well it works. Once the disquieting intro (reminiscent of Samhain’s Initium) is settled in, octogenarian vocalist Chris Kachulis heralds the doomiest version of Marlene Dietrich’s ‘Falling in Love Again’ you are ever likely to hear, with Kachulis’ front-and-centre performance both mirroring and subverting the 1930 original*. “Performance” is such an apt word for this, as both this track and ‘A Summer with a Thousand Julys’ are works of truly dark theatre. This latter track is an especially startling piece of work, with Kachulis again really throwing himself at ‘You Go to My Head’ (another 1930s original*), stripping a sweet song about fleeting unrequited love to the raw essence to the point of agonised obsession, while all the time a second, more sinister vocal whispers beneath in mocking tones. This is like Celtic Frost at its absolute poetic, bombastic, confusing pomp and can’t be recommended highly enough.

In between this, the originally-promised “all manner of goings-on” truly kicks in. Much-remixed single ‘Shapeshift’ mixes electronic noise with a pendulum bass riff which becomes the rest of the band’s cue to layer noise upon noise throughout. ‘The Widening’ feels more like a threat than a song with the vocals buried behind the band, Suspiria-like, with the occasional word or phrase (usually “I see you”) floating to the surface before disappearing again amongst the taunts, laughs and coughs. The underground dependency-disco of ‘Relapse’ brings in Inyang Bassey to repeat a mantra of “Give Mama just a taste, just a little bit, just a taste” which becomes more desperate as the track unfolds, the band’s accompaniment becoming more bleak as desperate along with her. And ‘Circle of Knives’ takes early Sabbath bluesy-doom Tom Warrioresque vocalisation and brief acceleration to produce yet another favourite of mine.

With only seven tracks, Nastie Band certainly live up to their Art-Doom epithet by easily managing to be both, usually at the same time. Ever-changing and constantly interesting, it’s something that can easily be described as “different” in so many positive ways.

*Probably apropos of nothing, but then again, this record has completely addled me. Both these covers have also been performed by Bryan Ferry, which puts them in the same otherworldly ballpark as Iron Butterfly’s In-A-Gadda-Da-Vida, a song covered by both Slayer and Boney M.