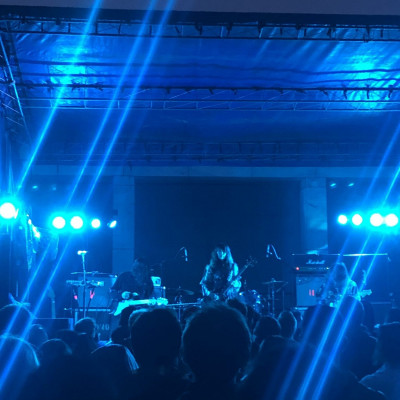 What could be more perfect than seeing dark and emotional music in a cemetery on an uncharacteristically grey and chilly June evening? While the show was billed as “rain or shine’ I spent much of the day watching a storm inch across the map on my weather app with trepidation. As eager as I was for the concert, the idea of standing in a downpour isn’t really something I was looking forward too. As luck would have it the storm dissipated well before the show was set to start and instead we were treated to an ominous fog that hung over the old graves and Gothic architecture of a beautiful cemetery, a perfect setting for the waves of emotion that would pour out of the performers.

I have had the distinct pleasure of watching Emma Ruth Rundle perform for the better part of ten years. Whether it was in the influential, brooding instrumental band Red Sparowes, the delicate harmony laden beauty of the Nocturnes or the ferocious and atmospheric post punk of Marriages she has always been a captivating musician. This performance combined elements of all of her previous work into a powerful and emotionally stirring set. The song selection leaned heavily on her most recent solo album On Dark Horses and left little downtime between songs to catch one.’s breath. It’s a rare performer that can blend such open honesty with raw power, and the her band’s grasp of that dynamic is impressive. None of the players ever step out of their roles, and everything is in service to the songs being performed; and they are great songs across the board. I particularly found the songs ‘Darkhorse’ and ‘Races’ to be stunning.

As the sun was slowly dropping, and taking the temperature with it, she performed ‘Real Big Sky’  which is the closing track from her previous album Marked For Death, completely solo. She managed to lose none of the power of her full-band songs, but also ended with such raw emotion that I can’t imagine there were many dry eyes in the wet, cold field we were all standing in. It was a perfect closer and ending to her set and, coincidentally, this tour.

Full disclosure: in the last several years I have kind of lost track of what Mono was doing and releasing. After their landmark album Hymn To The Immortal Wind, my attention wandered.  I have been missing out.

Mono, to put it mildly, blew me the fuck away: I had my expectations and preconceived notions shattered within a few seconds of them starting. Mono are often associated with long crescendos and slow burning arrangements but they came crashing out of the gate with the brief introduction of ‘God Bless’ into ‘After You Comes The Flood’ from the recently released Nowhere Now Here. No slow build here, just a thundering wall of beautiful tension wound tightly around a bass tone most doom metal bands would sell all their weed for.

At this point the sun had completely set and their projector was in full effect, not only on the stage but also along the brick walls of the cemetery building behind them. They began to introduce the more quiet and textured elements that they are known for, and all I could think about was how good everything sounded. Midway through ‘Sorrow’ the PA and the lighting rig both went down. The band continued to play in almost complete darkness relying solely on their stage sound. It didn’t slow them down at all and still sounded wonderful, albeit considerably quieter. It is a testament to their performance that most of the crowd was shouting encouragement rather than complaints. and when it all came back in there was palpable feeling of exaltation in the audience. It was one of the best instances of a band overcoming a technical difficulty I have ever witnessed.

Among the highlights of their performance was the beautifully low key, and vaguely Twin Peaksish atmospherics of ‘Breath’ which was also the only song with vocals in the set. I mentioned that I fell off Mono after Hymn To The Immortal Wind, and I was delighted to hear them perform ‘Ashes in the Snow’ which was just as sprawling and gorgeous as I would have hoped, with the added benefit of their live sound being so massive that the studio recording feels tiny in comparison.

After the final waves of feedback and noise faded away, I felt as I had just witnessed something incredibly special; and even though I know they have put in hundreds of performances the setting made this one almost transcendent. I could have watched them play for another hour with no complaints: they’ve made a fan and believer out of me. If either Mono or Emma Ruth Rundle perform near you, do not miss it for anything.