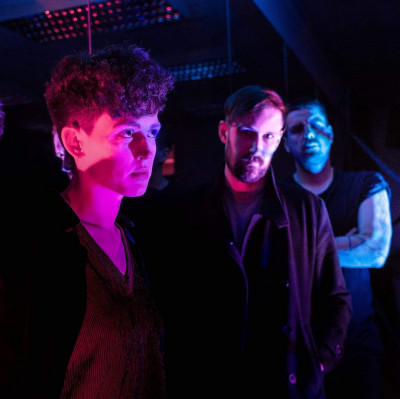 When we started this band, playing Supersonic was one of our secret ambitions. We are definitely excited to play and it feels like we've reached another milestone.

Supersonic Festival has been wowing audiences with its varied lineups since 2003 and this year’s event held between 19th-21st July is shaping up to be an absolute cracker. With performances from Neurosis, Godflesh, The Bug & Moor Mother, Mono, and Anna Von Hausswolff among so many others, Supersonic is a celebration of underground music, art and film and is highly anticipated as soon as it is announced. The festival is held in an assortment of venues in Birmingham and features an array of bands, acts, DJs and everything in between, always ready to expect the unexpected. With this year’s installment rapidly approaching, we spoke with a series of bands who are playing this year’s event about playing Supersonic as well as what else they they are up to. Here we chat with local band Matters about the festival and what it means to be playing it.

(((o))): You’re playing on the Saturday at Supersonic. How much are you looking forward to playing?

It means a lot to us that we have been asked. When we started this band, playing Supersonic was one of our secret ambitions. We are definitely excited to play and it feels like we’ve reached another milestone.

(((o))): Are there any artists that you are looking forward to seeing over the weekend?

Finding something new to love is one of the best things about festivals and it’s highly doubtful we’ll be let down on that front. We are also all very excited about The Bug and Moor Mother collaboration. Also the opportunity to see Dalek live is excellent.

(((o))): Matters are from Birmingham, as is Supersonic. What does the festival mean to both yourselves as musicians and as a band from Birmingham and the city’s music scene as a whole?

Some of the most interesting shows we’ve been to over the years have been put on by the Supersonic crowd. There’s an open mindedness to the line ups that’s really inspiring and it’s great to have something in our city that people travel from further afield for. The city can feel surprisingly small at times so events like this are super important in keeping things fresh.

(((o))): What can fans look forward to from your set at Supersonic?

We are going to be playing a whole bunch of stuff that we haven’t released. Our sound has developed into something a bit different from our first record. Darker and perhaps more reflective of how unsettling the wider world feels right now.

Stuart had previously played in a pretty heavy band and wanted to do something a bit different and one day Brid came along to the lockup and started putting synths over it all  (with an old midi keyboard and an entire desktop computer of cracked software at the time). Since then we’ve bought real synths and less gainy amps and gradually figured out how to make it all work together. Tom joined us late last year. He makes his own electronic music alongside being an actual drummer so he has been an excellent addition.

Being approached by Geoff of Static Caravan Records was unexpected and one of the best things to happen to us, as well as playing with bands we really admire. We’ve been pretty lucky as we’ve never really asked for anything.

We put a lot of effort into our videos and art work, so seeing those things be well received is always a highlight.

(((o))): How did your show with The Messthetics go earlier this year?

It was really fun and kinda surreal to share a line up with Brendan Canty and Joe Lally as Fugazi were a band we grew up listening to. Messthetics sounded great. They’re guitarist Anthony makes some incredible sounds. They were also the most genuinely lovely people.

(((o))): You worked with Hoopla Blue on the Mauveine C track. How did this collaboration come again and what has the reaction been like?

We’ve been friends with Hoopla for a while and have played a few shows together. As a band we share some common ground, but are totally different. It just made sense, plus it’s fun to do things with friends. Mauveine C wasn’t the intended single, but once we heard it we knew it deserved a video. So plans changed and we feel it was totally the right decision. The reaction was great, we were fortunate enough to be asked to launch the video at the Flat Pack Film Festival in May, plus the track has had some love from Steve Lamacq and Gideon Coe. It worked out really well. Thanks, Hoopla.

(((o))): Have you got any plans for any further new material this year?

We have one track already recorded that we are really excited about. We’ll be playing it at the festival and it’s the first track we completed with Tom, who joined us late last year. We are in the studio in August to finish the b-side.

We will be working on a new video for the aforementioned recording in August. It will be the first time we’ve collaborated on a video with anyone outside of the band which is very exciting. Then we have a headline show in Birmingham at the end of August. Beyond that we will just take it as it comes, as always.