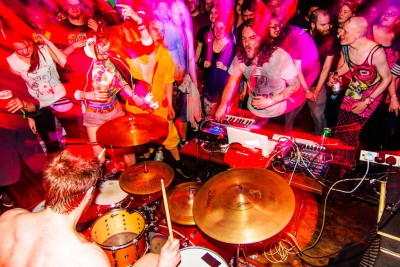 But really what we hold in our minds when we are writing is how it’s going to go down live... is this gonna completely slay and are people gonna be having a party!

Supersonic Festival has been wowing audiences with its varied lineups since 2003 and this year’s event held between 19th-21st July is shaping up to be an absolute cracker. With performances from Neurosis, Godflesh, The Bug & Moor Mother, Mono, and Anna Von Hausswolff among so many others, Supersonic is a celebration of underground music, art and film and is highly anticipated as soon as it is announced. The festival is held in an assortment of venues in Birmingham and features an array of bands, acts, DJs and everything in between, always ready to expect the unexpected. With this year’s installment rapidly approaching, we spoke with a series of bands who are playing this year’s event about playing Supersonic as well as what else they they are up to. Here, we caught up with electronic rockers Big Lad to hear their thoughts on the festival and how they’re going to get the party started.

(((o))): You’re playing the Friday of Supersonic. Are you looking forward to the show and what can fans expect from your performance?

Yes indeed, I’ve played a couple of times with various other projects in the past, but this is the first time for Big Lad, knowing the fest I think we have a decent chance to really bring the High Octane Party Bangers… hopefully people will lose their shit!

(((o))): What does Supersonic mean to you as a festival and how important is it?

I really love the festival, like Supernormal and Raw Power it feels a bit like a massive family gathering of all the weirdo noise makers in the U.K. with the added bonus of meeting some new people and discovering some killer new music along the way

(((o))): Who are you hoping to see at the festival over the weekend?

It’s gonna be great to see Hey Colossus again, it’s been too long since I’ve managed to catch them.

Making people dance… really I think that’s it, like musically it’s quite simple… Aphex VS Lighting Bolt… but really what we hold in our minds when we are writing is how it’s going to go down live… is this gonna completely slay and are people gonna be having a party!

Really great, such an amazing label to be part of, like the lineups were insane, and so many people we have met over the last few years came down to celebrate.

(((o))): And how was the Box alldayer in Manchester that preceded it?

(((o))): You also did a UK/Euro tour earlier in the year. How did the tour go and what were some of the highlights?

Touring always makes me smile, it’s just great when you get to see all these communities that are based around awesome music in the most random of places. It’s hard to pick a highlight, but the  Rennes show was pretty wild, somehow they squeezed about 60 people into a space that should probably hold 20… it was pretty crazy, proper old school DIY vibes.

(((o))): You played at Bangface early this year. What was the festival like and what were the highlights?

Bangface is Bangface, there is nothing else like it anywhere. It’s crazy. I really think it’s the one festival that everybody should go to at least once.. I can’t really remember anything… HA!

(((o))): Have you got any plans for a follow up to last year’s brilliant Pro Rock album?

Yep we are going into a residential studio in October to get started on the next one, we are going write and record at the same time, so maybe this one will come out a bit more jammy feeling… who knows!

From what I can tell people like it! People seem to know the tunes when we play live so I guess that means people are listening to it!

(((o))): You released the Pro Rock Remixes EP in April with remixes of Pro Rock songs by the likes of Mixhell, Gum Takes Tooth and Lad Zeppelin. What has the reaction to it been so far?

Yeah again good I think, it’s always great hear what people come up with and there take on the tunes… all of these are pretty far out, so hopefully it’s gets some new people into what we do and vice versa with people that like Big Lad but may not have heard of some of the remixers.

I kinda like doing remixes of stuff that is completely unrelated to what I do, recently I got to do a remix for Nails and Full of Hell for a different project I was involved in… it’s always fun to try and make it more mental than the original when you get something like that.

(((o))): What have been some of the most memorable moments you’ve had in Big Lad so far?

Our album launch at the Lexington was pretty nuts, to sell that place out was an awesome feeling. Also some really memorable gigs have been, Arctangent a couple of years ago, Raw Power, Visions in France is pretty great. Both times we have done Bangface… to be honest, we always have a pretty great time when we play, so most gigs!