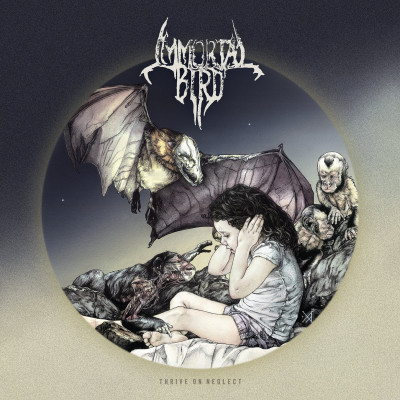 Thrive On Neglect by Immortal Bird

Bands with a hybridised sound, drawing influence, sounds and structures from multiple (sub)genres, have always proved more interesting to me than those that stick closely to a genre’s rulebook. (That’s not to say that I don’t love a no-frills hardcore band or a death metal band that toes the line.) The mashing of genres is a big reason why Immortal Bird’s immensely underrated 2015 album Empress/Abscess stands as one of my favourite albums of the last decade, that and the fantastic riffs – the main riff that kicks in near the start of ‘Saprophyte’ is frankly ridiculous. I’ve been waiting with bated breath to hear how the Chicago-based quartet would develop their sound, and now, almost exactly four years since the release of Empress/Abscess, Immortal Bird are finally unleashing its follow up, Thrive On Neglect.

Following a few changes to their lineup in 2016 – Matt Korajczyk on drums and guitarist Nate Madden joined vocalist Rae Amitay and bassist John Picillo – the quartet sound ravenous and better than ever, taking a reasoned and natural progressive step forward from Empress/Abscess. Newly signed to 20 Buck Spin, and with a fuller, clearer mix courtesy of engineering maestro Dave Otero (Cattle Decapitation, Allegaeon, Primitive Man), Immortal Bird’s second album is raw, compelling and, for the want of a better word, thriving. The recording has captured the band’s intense hardcore energy with moments such as the breakdown on ‘Anger Breeds Contempt’ given the heft that they deserve and the lighter melodies, provided by the more accessible hooks, are handed the prominence needed to grab your attention. Thanks to this excellent production, as well as the smart and intriguing songwriting from Rae and Nate, the constant segues from chaotic math to death metal to prog to sludge are organic and intuitive.

The progression of the songwriting is evident from the onset of Thrive On Neglect, and it’s also clear that Immortal Bird are in for the kill. There’s no superfluous 2-minute intro – just a big riff, blastbeats and Amitay’s seething growls as opener ‘Anger Breeds Contempt’ gets straight to the point in a relentlessly ferocious manner. Although mostly full-throttle and technically complex – aside from the precision riffing, there are jazzy death metal bass flurries and intricate percussion peppered throughout – Thrive On Neglect is unpretentious and totally focussed. Clever breaks on songs such as ‘Anger Breeds Contempt’ allow the bass and guitar each get their own individual moments to direct the pace and tone demonstrating that there are subtleties to be found here and thanks to some atmospheric layering, it’s not all a raging barrage on the ears. Elsewhere, following a teasing false finish, cathartic lead single ‘Vestigial Warnings’ diverts from severe blackened hardcore by taking a plunge into a bludgeoning down-tempo sludge dirge. The overarching blackened influence continues with possibly my favourite track ‘Avolition’, on which the pacey drums and stirring arpeggios recall Oathbreaker at their most intense, and final track ‘Stumbling Toward Catharsis’.

As with Empress/Abscess, the excellent album artwork is again provided by the talented Kikyz1313, which adds to the overall package of an excellent release, and I can’t wait to get my hands on a vinyl copy. Thrive On Neglect ambitiously mixes styles but it truly delivers, and easily lives up to my high expectations. Immortal Bird have crafted an exhilarating and evocative album that should feature in the library of any discerning metal fan.