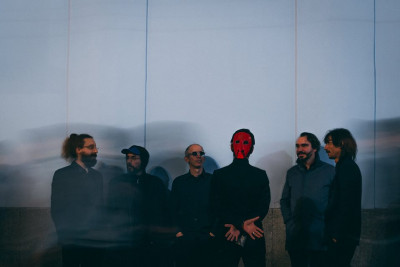 Our energy is invested into building a body of work that can take a life of its own, becoming a living entity with its own codes and mechanisms.

Supersonic Festival has been wowing audiences with its varied lineups since 2003 and this year’s event held between 19th-21st July is shaping up to be an absolute cracker. With performances from Neurosis, Godflesh, The Bug & Moor Mother, Mono, and Anna Von Hausswolff among so many others, Supersonic is a celebration of underground music, art and film and is highly anticipated as soon as it is announced. The festival is held in an assortment of venues in Birmingham and features an array of bands, acts, DJs and everything in between, always ready to expect the unexpected. With this year’s installment rapidly approaching, we spoke with a series of bands who are playing this year’s event about playing Supersonic as well as what else they they are up to. We have a chat with avant garde Jazz/dub group HHY & The Macumbas about playing Supersonic, working with Adrian Sherwood and more.

(((o))): Are you looking forward to your show at Supersonic?

We always look forward to shows, since we always tend to have a different drive and energy for each one, depending on the location, the time of day at which we’re playing, who else is playing, a new idea we want to try, or the band’s configuration on that particular day, because our line-up is not always the same. Besides that, we know that Supersonic has been a very relevant festival for at least a decade, so that is also part of our enthusiasm for this specific show.

(((o))): What can the audience expect from your performance?

Telling people what to expect can be tricky, even more because people tend to have their own expectations… but HHY & The Macumbas’ concerts are always aimed towards being an immersive experience for both band and audience, using a barrage of rhythm, bass pressure, dub tactics, extreme echo and a visceral approach to performance, ideally achieving a state in which the sense of present space and time is enhanced into a sort of hyper-reality.

(((o))): Are there any acts you want to check out over the duration of the festival?

Each of us has a particular interest, but we can say that all shows that are graspable during the time span we’ll spend at Supersonic will be attended with curiosity and an open heart.

Maybe an all ghost festival could be great. With a line up of only spectres from our own musical references that are no longer here, and also spectres from some of the musicians and performers that operated through earth during human existence. This could be cool, an immersive chill of unphantomed voices and sounds from human repertoire.

(((o))): You recently did a show with Adrian Sherwood at Serralves em Festa. How did that go?

Great, he is a major inspiration and super fun person, so we had some good times playing together.

(((o))): How did you hook up with Adrian in the first place and are there any plans to work with him again?

Jonathan played a couple of shows with Mark Stewart (from On-U-Sound act  Mark Stewart & The Maffia) some years ago and one of those shows was also with Adrian, so Jonathan was dubbing Mark’s voice and the drums on stage and Adrian was re-dubbing everything in the front of house mixer, a kind of echo overload. After that, the interest in making a HHY & The Macumbas show with Adrian was set. Anyway, maybe we release the recording of the show in the future!

(((o))): Were you big fans on On-U-Sound and what are some of your favourite releases on the label?

Among many other fundamental On-U-Sound releases we can highlight the New Age Steppers from the early 80s, a collective featuring Adrian, free improvisor Steve Beresford, German-born dub/reggae singer Ari Up and many others, an amazing blend of hot grooves, cold overtones, free improvisation and dub manipulation, they are the kind of ultra-mutant lifeform that conformists regard as an unclassifiable aberration and that we really appreciate. You can dance to them with your whole organism! And also the heavy metaphysical sounds of African Head Charge, the word/sound drama of Prince Far I, and the collages of Mark Stewart & The Maffia.

(((o))): You are also playing a show with The Kampala Unit At Unsound. What can fans expect from this performance?

Again, it’s impossible to tell people what to expect, but we´re aiming for a full-on pressure and percussion meltdown.

Well, maybe Kanye West. That could be interesting.

(((o))): You also played at Desertfest in May. Can you tell us all about that experience?

Desertfest was a very challenging and rewarding experience for us for many reasons: it was the band’s first show in the UK (Supersonic will be the second), and UK audiences probably have more access to music than in many other places, so you can’t make an impact in the UK just by being different from the usual bands in the local scene, you really have to present yourself with some sort of quality, whatever form that quality might take… also, the context was challenging because Desertfest is strongly associated with a sort of doom/stoner-rock aesthetic that we don’t fit into (we were the only band that day, and probably in the whole festival, that didn’t use guitars or bass). We felt great on stage, and the feedback we got from the audience, the festival’s staff and from a couple of the other musicians who played that day was amazing, so we have a great memory of that day, we felt that we were able to deliver something.

The cherry on the cake was playing in a venue that, in the past, was blessed by a show by Prince, which is very important for our own personal narratives… the same thing happened in a venue in Lisbon last year, maybe we’ll get to continue to follow the Prince trail!

We got together in 2008, when Jonathan Uliel Saldanha assembled a (small, at first) group of collaborators to further explore the strategies of dub, polyrhythmic displacement and bass pressure that were at the core of his solo work as HHY. Over a period of 3 or 4 years, new additions were made until the line-up stabilized into its present form: João Pais Filipe, Filipe Silva, Frankão and Brendan Hemsworth on percussion, Álvaro Almeida and André Rocha on horns, Jonathan Uliel Saldanha on electronics and live dub, and Nuno Aragão and José Arantes on live sound. As we mentioned before, this lineup is flexible and different concerts can feature different combinations.

(((o))): You released the album Beheaded Totem last year. how has the album been received so far?

The reception it’s been getting has been surprisingly active, actually it’s very close to being sold out. Through the years we’ve managed to gather a following that keeps our music flowing to the lives of people, even if we’re not very active within social networks! Music has its own narratives, and it can cut through the thick surface of simulation.

(((o))): What have been some of the highlights of the bands career been so far?

The whole career is the highlight! These 11 years have been spent distilling and refining the vision we have for our music, and this effort is sometimes rewarded by very rich experiences, live, in the studio or in the rehearsal space, in which our personal and collective horizons expand into new possibilities and realities. Our energy is invested into building a body of work that can take a life of its own, becoming a living entity with its own codes and mechanisms… quoting (not very precisely) Brian Eno, “this should be an artist’s minimum ambition.”