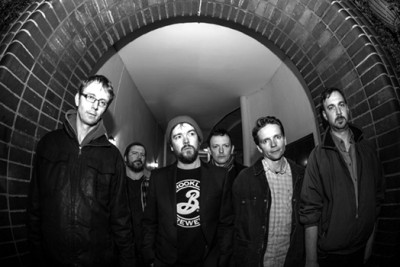 Some people have grumbled that it doesn’t sound like the last one, but if you listen to those people you’re screwed.

Supersonic Festival has been wowing audiences with its varied lineups since 2003 and this year’s event held between 19th-21st July is shaping up to be an absolute cracker. With performances from Neurosis, Godflesh, The Bug & Moor Mother, Mono, and Anna Von Hausswolff among so many others, Supersonic is a celebration of underground music, art and film and is highly anticipated as soon as it is announced. The festival is held in an assortment of venues in Birmingham and features an array of bands, acts, DJs and everything in between, always ready to expect the unexpected. With this year’s installment rapidly approaching, we spoke with a series of bands who are playing this year’s event about playing Supersonic as well as what else they they are up to. We caught up with Paul from Hey Colossus to talk about playing the festival, the band’s latest album and memorable gigs.

(((o))): You’re playing the Friday of Supersonic. Are you looking forward to the show and what can fans expect from your performance?

Very much so. We will have played a lot of shows in the three months leading up to Supersonic so you should be getting us at peak. Whatever that is. Value for money.

(((o))): What does Supersonic mean to you as a festival and how important is it?

I dare anyone to look at the line ups since they started in the early 2000s and argue against it being the best curated festival, consistently. Top people, so so generous. They bring the party every time with a very warm atmosphere.

(((o))): Who are you hoping to see at the festival over the weekend?

Personally if Godflesh play anything from Songs Of Love And Hate the 15 year old me will probably smile quite broadly. I wish I could stick around for the following day to see The Body. Main man Chip is probably the most affable man in music and The Body are always shifting, always successfully. That’s how it should be.

Ed Miliband fronting Napalm Death in the community hall at the bottom of my road. Then 20 minutes of 1985 Prefab Sprout. I think getting the catering right is the key. I’d go meze. Stage 2 – Karen Gwyer B2B with Not Waving. This is Not This Heat as literally every time we’ve been away they’ve played and I’ve missed every show. We were in Germany just now when they did their last London show about 30 minutes from my house. I’m livid.

(((o))): How did your recent UK tour go and what were some of the highlights?

Very, very well. There are more good people out there than not. Always good to be reminded of that. Portsmouth was great as I don’t think many bands head out there for some reason and no ones folding their arms waiting to be impressed. Bands – play somewhere different once in a while.

(((o))): Aside from Supersonic, you are also playing Glastonbury. Are you excited to be playing the festival?

Joe is extremely excited to be playing 20 mins from his house. It’s the ultimate retribution for all the 6 hour round trips to rehearsal down the years.

(((o))): You’ve just released your be album Four Bibles. What has the reaction to the album been like so far?

Some people have grumbled that it doesn’t sound like the last one, but if you listen to those people you’re screwed. Largely excellent. It’s really appreciated.

Trying to get the balance right. Would love to come out bold as brass playing the whole record but you’ve got to mix it up. It’s good to bring things in and out on a whim.

(((o))): What has been the best gig that Hey Colossus have ever played?

There’s a top few. Chameleon in Notts, recently in Portsmouth, EspaceB in Paris with Grey Hairs. Most gigs have their moments, for better or worse. Boto’s Farm in Cuneo had a view of the Alps, we’ve played on boats and in doctors waiting rooms. It’s not always the obvious things that make a gig great.

People. Meeting them. All over. And European food.

(((o))): Alongside the new album, Joe released a book entitled Sleevenotes about the band and their music. What was the inspiration behind the book and how has it been received?

Joe needed to pay off the local bookies, plain and simple. He’s run up some knee hobbling debt over the years on the gee gees and this seemed like a good way to chip some of it off. Enough people have bought it to keep the wolf from the door. For now.

(((o))): What have been some of the highlights over the years with Hey Colossus?