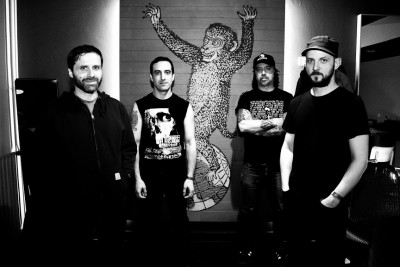 Going back to those recordings was a sobering reminder that there were no second chances with our lost friend. But in a way, it was like spending time with Caleb when building these demos into what became a new album, because he played on each song.

With the tragic death of bass player Caleb Schofield during the early stages of making their new album, the members of Cave In were devastated but bravely carried on with the album which ultimately has served as a tribute to their fallen friend. Final Transmission, which has recently been released, is that album and we had a chat with vocalist and guitarist Stephen Brodsky to hear all about the album and the difficult process of finishing it, how Final Transmission serves as a tribute to Caleb Schofield, favourite memories and history of Cave In and their recent live shows and tributes.

E&D: You have just released your new album Final Transmission, which is out now. It’s the first album you’ve done since the tragic passing of Caleb Scofield. How was the experience of of recording the album?

Stephen: Well, it’s certainly not the album we envisioned when the writing process began. Everything on Final Transmission was originally demos for an album we intended to make in a studio. Going back to those recordings was a sobering reminder that there were no second chances with our lost friend. But in a way, it was like spending time with Caleb when building these demos into what became a new album, because he played on each song.

E&D: Was difficult was the recording of the album or did you find it helped to grieve?

Stephen: Putting together Final Transmission got me, JR, and Adam to spend quality time with each other. It was definitely helpful for us to work through some of those debilitating feelings in the presence of one another while immersing ourselves in music.

E&D: Did you find writing and recording the album was a cathartic experience at all?

Stephen: Recording vocals and writing lyrics for ‘Shake My Blood’ definitely had that effect. In a way, that’s our response to the whole situation boiled down to 3 and a half minutes. Also applying Caleb’s lyrics for ‘All Illusion’ to the music had a profound effect on us, like discovering another piece to a puzzle that may never be finished.

E&D: Were you determined to finish the album as a tribute to Caleb?

Stephen: This one’s definitely all for him, and his family too. The intention was to do right by the material with respect to everyone involved.

E&D: What has the reaction to the album been like so far?

Stephen: Overall it’s been both heartwarming and overwhelming. I think some people might be afraid to approach it, because of the circumstances surrounding the album. But as far as the actually playing goes – that’s the four us feeling as alive as ever together.

E&D: How has the support from your family, friends and fans helped along the way?

Stephen: It’s been everything to us, really. This is all new territory and so we find ourselves relying upon trusted sources to do what’s honourable.

E&D: What are your most treasured memories of Caleb both in the band and away from it?

Stephen: Caleb had a funny way of improvising when he’d forget lyrics to a song. He’d scream stuff like “I can’t remember the fucking words!” – I’d catch it in the monitors and just laugh. Some of the best times we had in later years together were Cave In camping trips to New Hampshire, where we’d just get loose and weird in the woods together.

E&D: How did your recent show at Hellfest go?

Stephen: Hellfest was everything it lives up to be. I’ve been told of its awesomeness for years now, and we were not let down in the slightest. In addition to Cave In having a good set, we got to see SUMAC play, which was great, and afterwards both bands enjoyed some dinner together with the soundtrack of Whitesnake playing on the main stage.

E&D: Did you play any material from the new album and how did it go down?

strong>Stephen: We’ve been playing ‘All Illusion’ and’Shake My Blood’ back to back at recent shows. The new stuff seems to go over well, if anything for the simple reason that both tonally and emotionally it’s a different experience apart from the rest of our material.

b>E&D: You have been playing further dates throughout Europe in Vienna and Prague. How have the shows gone and what have been the highlights?

Stephen: Vienna was cool – it was at a venue that we’ve played at least once and maybe twice before. And it was our first time playing in Prague, which felt great. Overall we were very happy with the vibe and turnout, which can be hard to do when playing European headliner shows early in the week during festival season.

E&D: Have you found that the support of the fans at the live shows have inspired you?

Stephen: Maybe more than ever, it feels great to go out there and have people showing up eager to experience what we do. In light of recent events, the question certainly crossed our minds: is it the right choice to keep on going as a band? I think having such a positive response at recent shows has only helped our sense of perseverance.

E&D: How was the experience of playing at Roadburn Festival, earlier in the year?

Stephen: Roadburn operates in a way that has kinship with the way our own music community operates. We’re a musically incestuous bunch, and that spirit is very much encouraged by Roadburn with its curation process. Felt great to have Cave In on board this year. Full disclosure: I definitely almost passed out during ‘Juggernaut’ – must’ve hit the mic too hard with my vocals, and for a good 20 seconds or so, I was convinced that I was gonna go down in front of hundreds of people. Thankfully I managed to pull it together, although some real questionable sounds came out of my amp at that moment!

E&D: How did the London show in April, which was your first UK show in a decade, go?

Stephen: The show sold out real quick – in hindsight, we could’ve booked an additional night. London was a benefit show for the Scofield family and much like Boston and L.A., it made the experience more emotional than usual. But we felt like it was the right move, because the UK has always been very welcoming of Cave In, and we wanted to give our fans over there the chance to show their support.

E&D: Can you tell us how the Caleb tribute shows with Celestial, Pelican, Converge and Old Man Gloom amongst others went and how much of an emotional experience it was?

Stephen: The tribute shows were a lot of work. They just had to be over the top because that’s the kind of person that Caleb was, and we wanted to try and match it. The amount of energy in the room and the feeling that it gave me is something I’ll never forget.

E&D: What are Cave In’s live plans for the rest of the year?

Stephen: Cave In has plans to play some US shows in support of the Final Transmission album – dates will be announced this summer.

E&D: What have been some memorable gigs that Cave In have played over the years and what made them so memorable?

Stephen: One of the last great shows we did with Caleb was the 2011 Fun Fun Fun Festival in Austin TX. We got to watch a beautiful sunset during our set while Kool Keith played Dr. Octagon in its entirety just across the way.

E&D: How did Cave In start as a band in the first place?

Stephen: We were all friends that grew up in the same town of Methuen, MA. At some point we wanted to immerse ourselves in world of punk and hardcore music, and Cave In became the vehicle for us to do it.

E&D: What have been some of the highlights in your career with Cave In?

Stephen: Touring as main support with Foo Fighters in the UK in 2002 was a surreal experience, which included some of the biggest audiences we’ve ever played to… the tour ended with flying on a private jet with those guys, drinking champagne and listening to Tom Petty together.

E&D: What albums have had the biggest effect on you in your life?

Stephen: Converge’s Halo In A Haystack is a big one that opened my eyes to some very modern artistic capabilities within heavy music. Failure’s Magnified is still one of the heaviest presentations of great melodic unpredictability in rock music. In a nutshell, I’d say the combo of those 2 releases defines the approach of early Cave In.

E&D: Who have been the biggest influences in yourself as a musician?

Stephen: Growing up, my dad always had a guitar laying around the house, and it definitely lured me in… he also taught me to play ‘Patience’ by Guns N’ Roses, one of the first songs I’ve ever learned. So yeah, obviously Slash is definitely a big influence. And I’d say the stage presence of both James Hetfield and Kurt Cobain are things of an enduring nature in my trajectory as a musician.

E&D: What albums and artists got you into music in the first place?

Stephen: Led Zeppelin hit me hard at a young age. But it was Black Sabbath that made the idea of incorporating those early concepts of metal infused rock n roll seem actually attainable in my own world. But nothing sounds like Faith No More’s The Real Thing and the mystique of that material is still very fresh in my mind.