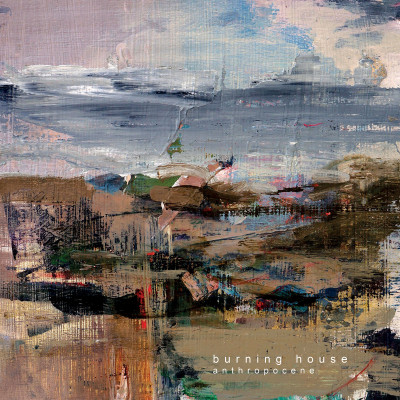 In Charlie Kaufman’s 2008 film – Synecdoche, New York – Samantha Morton’s character attends a viewing at a potential new house. She seems quite keen on the place but does have one slight reservation: the building is on fire. It seems that Burning House main man, Aaron Mills, is also a firm fan of Kaufman’s directorial debut and took this into account when selecting a moniker. Quite rightly too. The notion of cohabiting with a roaring inferno leaves itself open to many interpretations: it could be seen as a metaphor for living with mental health issues, or for a divided society in which both sides view the other as dangerous and malicious. It could also be construed as an analogy for yet another highly pressing issue, climate change. The latter being something that is accelerated by our human age, a period of which the title is Anthropocene.

But that’s enough of neatly tied threads. On to the music! Burning House (completed by bassist Patrick White, drummer Dominic Taylor and, for live performances, Ruby Taylor of Yumi & The Weather fame) play the sort of fuzzy shoegaze that typically gets compared to the likes of My Bloody Valentine and The Jesus & Mary Chain. Whilst those are valid reference points, they don’t quite tell the whole story. Album opener ‘Mimosa’ features the sort of guitar line that might have been wielded by Alkaline Trio’s Matt Skiba and then there is ‘Languor’ which feels like it’s been cut from the same cloth as early era Slowdive. There’s a smattering of hefty Scottish post-rock on ‘Big Tinted’ & ‘Fragments’, neither of which would sound out of place on Aereogramme’s My Heart Has A Wish That You Would Not Go, and the reams of rampaging distortion that skewers ‘Mirror Song’ is pure Ringo Deathstarr.

Now, that’s not to say that Burning House are devoid of their own ideas. Far from it. As Pablo Picasso (and perhaps, rather fittingly, others before him) said “the good borrow, the great steal”. Their music draws in these various influences and then distils them into something entirely their own. Prime examples of this can be found in the blasting rumbles that bookend ‘Her Vowel No’ or in the resonating gaps between gently struck notes and heartfelt crooning on ’13 Moons’.

In fact, as the album progresses, so does the band. They come more and more into their own, growing with confidence and a stealthy swagger. This isn’t any more evident than on 11 minute epic ‘Robinson’ (a song that has been cut down from its original length of half a sprawling hour). With this the band seem able to concisely (well, sorta) encapsulate their ethos. They build steadily and slowly. Patiently exploring a subtly optimistic guitar motif as walls of saturated distortion pile up, prompting glances skywards in exultant expectation. The drums thunder in. Eagerly pounding away as if driving a march onwards, like a cohesive unit hauling one another up a treacherous and seemingly unscalable summit. Whatever happened at the top of that summit must stay there unspoken, however, as the whole thing crumbles apart, lost in a searing squall of feedback.

Much like the Cocteau Twins, Mills’ vocals are often submerged in the mire. They fight their way out from beneath swirling seas of static. We catch snatched words and phrases as they break the surface. At other times they ring out with clarity and an infectious sense of melody. Anthropocene might steer deliberately away from pop but there are undeniable hooks laden throughout. Lines that will burrow deep into your subconscious and lay dormant only to be sifted out and spun internally at a later date. Whether the flames are still licking at our personal or planet-sized abodes when this happens, remains to be seen.