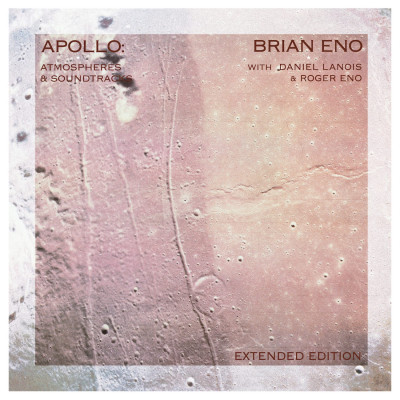 Pale and shaky Ewan McGregor dives into the worst toilet in Scotland and emerges into a shimmering underwater world of narcotic bliss. This surreal cinematic moment is perfectly accompanied by the soft calm of ‘Deep Blue Day’.

Even assuming a complete unfamiliarity with Brian Eno‘s work and myth you’ve probably encountered it or perhaps others from this album particularly ‘An Ending (Ascent)’ which recurs across films and documentaries galore. Apollo: Atmospheres & Soundtracks can stake a fair claim to being the most widely known ambient album by the man most widely associated with the term. Remastered and reissued in celebration of the 50th Anniversary of the moon landing this is a classic album by an acknowledged modern master. If you don’t already have a copy then now seems as good a time as any to fix that and make your life a little bit better by having it around to turn to. Apollo is beautiful and still, human and otherworldly, a dream of what an ambient record should be and a reinvention of that hazy ideal.

Originally recorded in 1983 as a soundtrack to ‘For All Mankind’ a feature-length documentary on the Apollo moon landing featuring the astronauts own commentary by some mysterious count Apollo: Atmospheres & Soundtracks is considered Eno’s ninth solo album. This excludes some of his previous collaborations and sidesteps the fact it is itself also one, with his brother Roger and Daniel Lanois. This new extended edition offers a second album of new material, a ‘reimagining’ of the soundtrack called For All Mankind that sees the three of them working together for the first time since 1983. It’s hard to assess a new addition to a beloved old classic unless it’s an out and out disaster and we can all rest easy because they have avoided that potential tragedy. They’re still faced with the impossible task of living up to the original album of course and although there’s some lovely stuff on the new disc I think it’s safe to say it’s destined to live in its older brother’s shadow.

Apparently Brian brought five of these new compositions to the project, the others three a piece. Although I’m not completely sure you could tell. If the file sharing, processing, long distance, nature of the collaboration is unclear, the whole hangs together well, inhabiting the same kind of sonic and emotional space as the original without simply mimicking or revisiting it. ‘Clear Desert Night’ has a hint of Blade Runner in the air while ‘Capsule’ could be a melancholy afterword to a post rock storm. I would perhaps have liked to hear more of Lanois’ liquid guitar in the extraordinary ambient country vein of ‘Silver Morning’ but the general sense of being close but not too close to the earlier pieces works well. Perhaps it will take time to reveal it’s own discreet charms, with each listen it’s subtle hooks get deeper into your skin. Although one of the great things about Apollo is its seductive immediacy in a genre that rarely deals successfully in such things. The first track ‘The End Of A Thin Cord’ and the final one ‘Like I Was A Spectator’ are perhaps closest to achieving that.

There’s an argument to be made that Apollo sees the end of Eno’s golden run of albums, pretty much everything up to this point is, in some way, wonderful. After this he began to focus more on collaborations, installation works and production. He and Lanois famously colluding in U2’s lamentable blare across the cultural sky. Still, nobody’s perfect. There are still great things to be found in his later records and in recent years he has once again returned to producing a more steady stream of ambient work. A reissue of a classic with an understated bonus disc of new material seems a fitting way to proceed. Meanwhile one of his more famous collaborators is being honoured with a Barbie Doll to celebrate the 50th anniversary of his own ‘Space Oddity’. Barbie Stardust in signature cherry red platform boots. The nice thing about Eno is that although he most likely wouldn’t agree to being made into a doll, he is probably both envious and amused. I suspect he’s got one on order.

Eno inhabits a unique space, largely of his own making, in the cultural landscape. His remarkable contributions to music and the ways in which we think about it have become an inevitable waymarker on the paths of generations of music obsessives pointing out previously unforeseen directions. If you’re coming to him for the first time Apollo: Atmospheres & Soundtracks is as good a place as any to start. Its accessibility moving towards an easy familiarity over the years as its influence has spread. Weightless but never meandering, melodic but never saccharine it conjures up the vastness of space and yet retains delicate earthly ties.