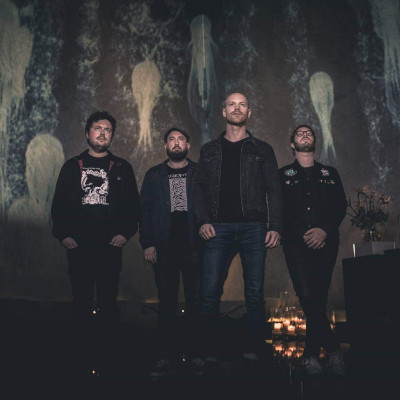 We like to treat every show like it is something special, something more than just a band performing live, whether its visuals, lighting, guest musicians, we always want to make sure we put on a show to remember.

Supersonic Festival has been wowing audiences with its varied lineups since 2003 and this year’s event held between 19th-21st July is shaping up to be an absolute cracker. With performances from Neurosis, Godflesh, The Bug & Moor Mother, Mono and Anna Von Hausswolff among so many others, Supersonic is a celebration of underground music, art and film and is highly anticipated as soon as it is announced. The festival is held in an assortment of venues in Birmingham and features an array of bands, acts, DJs and everything in between, always ready to expect the unexpected. With this year’s installment rapidly approaching, we spoke with a series of bands who are playing this year’s event about playing Supersonic as well as what else they they are up to. We talk to cinematic rock band Blanket about playing the festival and this year so far.

(((o))): You are playing at Supersonic on the Saturday. Are you looking forward to the festival?

Yeah we are really excited to play, we love playing festivals because it gives us a chance to play to so many new people who might not have heard us before, and we have found in the past that festivals like this are where you find new fans.

(((o))): What can we expect from your performance at the festival?

We like to treat every show like it is something special, something more than just a band performing live, whether its visuals, lighting, guest musicians, we always want to make sure we put on a show to remember.

It gives us a great sense of validation, it is a festival we’ve heard about for a long time and seen the amazing line-ups when they’ve been announced, and we’re just really excited to finally be a part of it.

(((o))): Are there any acts you’re looking forward to catching over the weekend?

So we’re not currently sure how it works with our schedule but we’re hoping to get there the day before and see Neurosis and Godflesh, we’re also playing the same day as The Bug which is pretty cool, and Mono are incredible, but there’s so many great bands on, and a few we’ve never heard before so we’re excited to check out some new acts we’ve never experienced before.

(((o))): You’re heading out on the road in October and November. Are you looking forward to those dates?

We are really really excited to play a lot of places we’ve never been before, or haven’t been in some time. And to be on the road with a band like Pijn is gonna be awesome, can’t wait to see those guys play every night.

(((o))): You’re touring with Pijn on those dates. Are you big fans of theirs and what can we expect from both bands on the tour?

We are big fans, and when we knew we were heading out on a headline tour we wanted to make sure we found the perfect band to come out with us. Pijn were one of the first bands we thought of, we’re all big fans of dynamic post-rock and Pijn are one of the best doing this right now, you can hear so many interesting influences in their music, and when tied together it has such an awesome unique sound. We think the bands fit together but also different enough to create an interesting and diverse evening of music. Plus they named their record after a line from Peep Show so who doesn’t love that.

(((o))): How did your recent show at Desertfest in London go?

Desertfest was really cool, when you play to a new crowd like that who might not be as familiar with you then it can be super daunting, but we got such an amazing reaction and it felt like more and more people were coming in to the room as the show went on and everyone in there was awesome, it got pretty damn loud when we finished and we were touched by the response. Also the first time any of us had been to the festival and its so cool, can’t recommend the event enough.

(((o))): What have been some of the highlights of your time in Blanket so far?

In the three years we’ve been a band its been quite the ride, its hard to pick out just a few highlights. I guess the most obvious one being getting to release ‘How To Let Go’ last year on the historic Music For Nations label as part of Sony Music. But also tours with Cellar Darling, Zeal & Ardor and Tides Of Manhave been fantastic experiences, as well as some unforgettable festival appearances at Desertfest, ATG and others. And even the early days of us playing weird venues in the middle of rural Europe are things we will never forget.

(((o))): Who are some of your biggest musical influences?

The four of us pull influence from all sorts of places, we come from different musical backgrounds, be it indie rock, punk, metal, post-rock. I think we like to bring a lot of these influences together to create our sound. Bands from Sigur Ros, Bon Iver, Radiohead, Converge, Failure, and Bane.

(((o))): You released your short film Fragments Of A Dream last year. Can you tell us all about it and what what the reaction to it has been?

That was a really cool experience, basically Bob (guitar/vocals) works a day job as a videographer and he decided to go out and make something interesting that he could tie in to the band. So he set out to capture the real images of our hometown of Blackpool and soundtrack it with our music. We tried really hard not to be too harsh on the place, but there is a dark side to the town which I think naturally came out in the movie. The reaction to the movie has been really cool, we even had a ticketed screening at our local library which was an awesome little event, that even sold out, complete with a cocktail bar and everything. Responses were mostly positive, with some just wishing we could have made the town look a bit nicer, but Bob just shot what he saw, shooting it in the Winter admittedly probably didn’t help.

It has been mentioned, but for now we think there is a lot more we can get out of the first movie, so we would actually like to try and get that out there more and perhaps even have some more screenings around the country, maybe even incorporate the movie in to our live shows.

(((o))): What is the music scene in your hometown of Blackpool like at the moment and are there any bands that you could recommend to us?

I think a lot of people know about our friends in Boston Manor who are blowing up right now and Rae Morris, but Blackpool is a town like many others which hosts a lot of hidden gems. Bands like Nana White Pepper and Jekyll have been getting out of town more which is great to see, but there’s a plethora of others. In terms of the scene in the town, when we were kids it was booming for a few years, but a lot of venues closed down and bands broke up, over the last few years though it has been growing again, largely in part to venues such as Bootleg Social and The Waterloo Bar.

We’ve got festival appearances over the Summer and we’ve got the tour with Pijn, other than that we are going to be working on and demoing songs for what will hopefully become the follow up to How To Let Go.