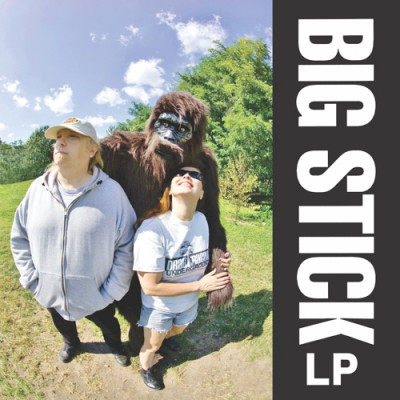 It’s summer. The sun beats down on hot black tarmac. Walking softly and wearing her tube top Yanna Trance whispers “I’ve got an addiction…” as she brings down the flag ‘Burning Rubber’ tears away on revving engines, squealing tyres and clattering machine beats. Pushed right back in the seat we’re racing down the quarter mile. Guitars roar, beats splinter, adrenaline pumps. Big Stick kept such a low profile the past fifteen years you wouldn’t be surprised to hear they’d been in jail, rehab or both but it seems they’ve been right where you’d always expect to find them, down at the dragstrip. Things don’t seem to have changed all that much in the world of Big Stick, still revolving mostly around lascivious takes on diners, dancing and the dragstrip. It’s a welcome jolt that they’ve wandered back in here at all, let alone with LP – a full length, rock solid distillation of everything that made them such damn fun in the first place – tucked under their arm.

‘Burning Rubber’ is hotly pursued by the positively unhinged stomp and squall of ‘Calamari Coco Butter’ just in case you thought they might have mellowed out a little. They’re still rocking a fanatical, clanky, blend of overdriven, lo-fi minimalism right up in yer face, their musical engine straining and distorting.

Big Stick’s discography was always a tangled mass of overlapping tracklists, remixes and partial compilations but they achieved a new peak earlier this year when three of this new record’s tunes appeared on Much Of The Best Of Big Stick before LP even saw the light of day. Helpfully, all copies of the new record come with the slightly shorter Some Of The Best Of Big Stick, getting you up to speed whiplash style with 10 classics from their early years. Back in the 80’s they essentially cooked up the recipe for Ministry’s ‘Jesus Built My Hot Rod’ about five years beforehand and developed a kind of art-damaged white trash delirium not all that far from what Shit & Shine is up to these days.

I was last thinking about Big Stick and cranking out some of their tunes about three years back. Digging out their early jam ‘Shoot The President’ for reasons I doubt require much explaining. A little internet pokin around turned up the rumours of a new record, and the tasty possibility they’d been working with Fred Schneider of the B-52’s. If they swap out the B-52’s pop sheen for a coat of more abrasive noise there are obvious similarities in both band’s approaches once you check under the hood. That promise finally arrives as they get together on ‘Hot Sauce’ a giddy, wigglin’, handclappin’ dance party that seems a little underpowered at first but soon proves infectiously genius. If it’s got you too hot it runs into the surreal soda pop advert of ‘Koochie Koochie Time’ for maximum refreshment.

‘Metaphysical Speaker’ is a standout track with Trance channeling a mixture of psychics, preachers and inspirational hucksters between bouts of screaming from John Gill. ‘Potato Chip Dip’ is another fun bizarro dance tune for losing it at the backyard buffet. The one new development we can point to on this album is the integration of some real brass, particularly on the second side. ‘Pleased To Meet You’ has a bed of sleazy horns with a low slung Foetus vibe that Yanna deadpans an escort script over. The sax is wailing in the background like a Las Vegas Grind tune on ‘Venomous Voodoo Princess’ and the horns get pretty wild on the rocking ‘Rascal’. They combine with the band’s basic guitar/samples/ drum machine groove extraordinarily well, smoothing just the finest sliver of that high end static migraine off it. Really, if they’d only ever done ‘Drag Racing’ it would sort of be enough but it’s great to have them back. LP is not just better than you would expect, it’s properly smiling, involuntary butt shaking, “hey, who IS this?” great. Never afraid to be stupid, trashy or wrong surely their time has come again.