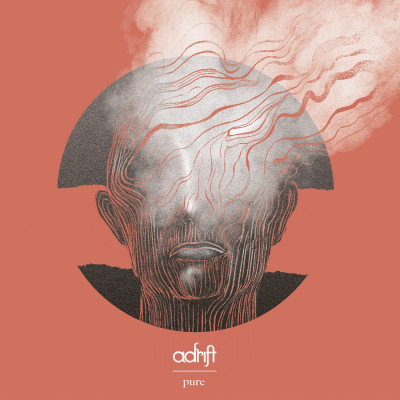 I know you should never judge a book by its cover or whisper stereotypes; but when I discovered Pure is only the third album by Spanish outfit Adrift in their 20 years together it got me to wondering if a bit of “mañana, mañana” was involved with the low productivity. However, that was blown away when the caustic music began; I could then see the true value in the old mantra that perfection takes time. A debut album was released in 2008 and it followed on from a couple of EPs, a single and a split release before 2012 saw sophomore album Black Heart Bleeds Black garner well deserved coverage and reviews. Pure is the culmination of all those previous efforts as well as the bonds of friendship and experience that have filled those 20 years, it casts its musical sub-genre net wide and absolutely nails everything it attempts whilst moulding a coherent grove the whole way thorough.

There are flakes of doom, post-metal, prog rock, post-rock and sludge within these six tracks but you never become disillusioned or lost and that is thanks to the solid rhythm backbone of Daniel Chavero and Jaime García on bass and drums respectively. The bass is ever present with its deep pounding which keeps the drums thundering. Even in the slower moments there is an assurance in the rhythm that there is a purpose and that a destination will be reached. This allows the guitars to go and explore different sounds and areas and brings a real tightness to proceedings yet it leaves open a sense of danger that is exploited by the vocal delivery of Jorge García.

The vocals pierce and spit and the band can reach moments of glorious heaviness and this is all laid out from the moment you hit play. The title track opens with crashing drums before a guitar slide awakens the bass and it never really rests for the following 50 minutes. Following track ‘Mist’ also carries this driving rhythm and it never lets go after making the initial strike. From there the album takes a bit of a slower start to the songs and by that I mean they don’t just come in with an initial body blow. ‘Embers’ and ‘The Call’ give a bit of notice before sweeping your legs and dragging you away, whilst the two longest compositions, ‘Confluence of Fire’ and ‘The Walk of Tired Death’, have that constant bass that fuses the spaces between the heavy and spatial fuzzy atmospheres.

When all these parts collide you realise that this album is 20 years of hard work, 20 years of learning the intricacies of playing music with others who may have varying tastes and styles and evolving as those tastes have changed. Pure is the culmination of all these learning experiences coming together like a river breaking its banks. When the water recedes the marker of where it reached will forever be present and used in comparison in future years. Adrift may have laden themselves with that burden but what a marvellous thing it is for the rest of us.