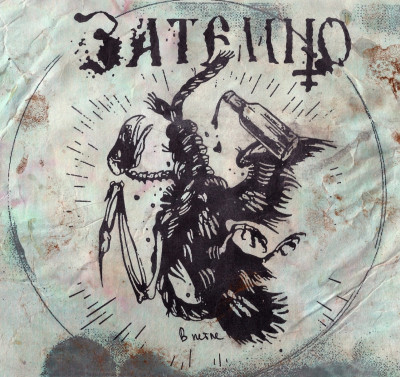 For many years now, Eastern Europe has produced some of the most accomplished (and occasionally controversial) black metal in the world, and while the likes of Drudkh and Negură Bunget have celebrated their respective cultures with unorthodox structures and instrumentation, there have been few Russian acts who have attempted similar feats. Musovite duo Zatemno (Затемно) are one of the most recent and, judging by the four songs that comprise V Petle (В Петле, “In The Noose”), beguiling innovators to emerge from a scene that is as obscure as it is exciting.

There are a few things that set Zatemno apart, the most obvious being their reliance on complex structures and intricate layering of samples, as well a penchant for contrasting light and shade in all elements of their approach, from vocals to musicianship and tone. The approach is at its most effective on ‘Lish Tol’ko Veter’ (Лишь только ветер), balancing spoken word and funereal ambience on one hand with lean melodies and a blunt, furious take on BM on the other, all overlaid and interspersed with folk metal flourishes and about a dozen other random odds and ends. At first, the chaos can be overwhelming, but the more you tap into their strange psyche, the more these strangely-situated constructs make perfect sense.

The other things guaranteed to raise a few eyebrows will certainly be the of accordion, hardly the most frost-bitten of instruments, throughout V Petle but these songs are masterfully constructed, bringing out the lonesome drone of the accordion and pushing it to its morose extremes and immersing it in the filth and fury. Used sparingly, it only lends itself to the peculiar atmosphere that surrounds it and, when paired with the crisper, more traditionally Slavic elements, it even helps in balancing out the weight of the album’s denser moments.

There’s a temptation to think of a relatively novice band with an unorthodox sound as ‘finding their feet’ but in Zatemno’s case, the weirdness feels confident and necessary. They can throw in deep baritones, croaking whispers and cries to the heavens within a minute of each other, stirring riffs (anyone who has missed peak Negură Bunget will find plenty to love in the title track’s gorgeous intro) can nestle comfortably against blastbeats, and it can all flow with a sense of drama and narrative. By taking an obscurantist approach to everything about their sound, they’ve created a quintessentially Russian metal album that doesn’t rely on gimmicks or nationalism to make its mark. For those who seek out the innovative, this is treat.