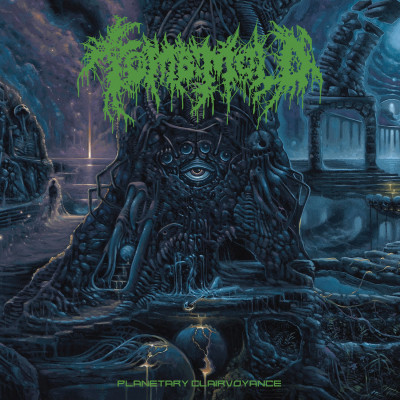 A classic smoking-crypt danger-approaching intro launches a moonraking, caterpillartracking riff, soon joined by an openthroated roaring growl. The slower riff is joined by a quicker one, before a great seesaw rhythm that shifts from one monstrous foot to another. A twinkly, almost Spanish guitar interlude glares at you mischievously, and the deathgrowl comes back in with rattling drums, showing an essence of death metal that can happily summon heaviness even when accompanying pleasant acoustic twirls. Of course then the distortion comes back twice as furious, before an alien signal lead appears and, repeating, reduces all to silent attention. Until the blasting chaos of ‘They Grow Inside pt. 2’ which lurches along wildly, a fast riff that sometimes springs off in unexpected directions or ambushes you with screeching sirens. Then weird ambience brings in the next track ‘Phosphorene Ultimate’, sprinkled with indecipherably distorted speech clips and eventually some shimmering clanging. It’s interesting in an odd way, but the jumbled talking samples somehow draw me out of the atmosphere built by the first two tracks, and for me it doesn’t quite work so early on- perhaps it would be better as an outro or something.

Next, anyway, ‘Infinite Resurrection’ gruffly rumbles towards solo wailing, while ‘Accelerative Phenomenae’ treats the vocal roar as drone while riffs shuffle through occult geometries. ‘Cerulean Salvation’ has a wonderful chug which breaks into fractal rhythms and spidery ladder runs and then pushes through to taller caverns of harmonic riffs and spacious dropouts, still spun with guitar threads until further in, there’s nothing but the clanging decay of distortion and then the humming abyss, a fitting end to the record. But there’s one more! The most immediately headsmashing riff is saved for last, ‘Heat Death’ running through several modulations but retaining its clattering propulsion throughout these permutations and through the treacly grooves and amidst the flailing-tentacle soloing. The hoarse croaking again nails the riffs to the floor before we descend into sliming crackles and eldritch gurgling to finish.

If it was up to me I might’ve shuffled the track order a bit, but any way round this is a diverse and gutturally raw collection. Can’t wait to see them in the autumn in the UK!